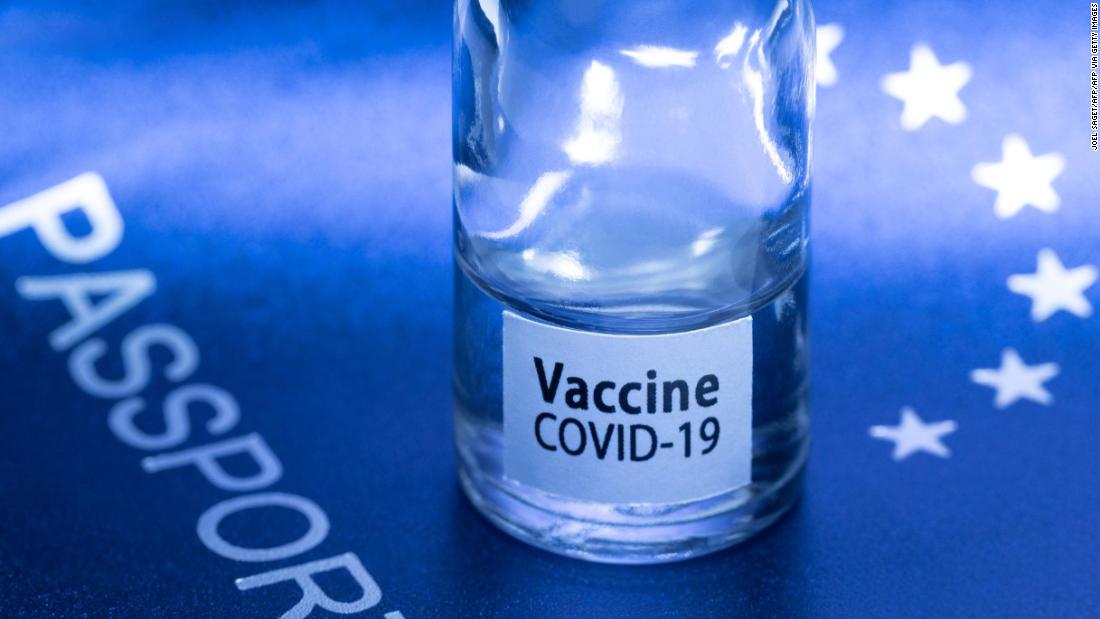 Last month, New York became the first state to roll out such a tool — known as the “Excelsior Pass” — which may be used to grant people access to events like sports and concerts.

But Covid-19 vaccination records live in a number of different places, and those places don’t necessarily communicate, experts told CNN.

The Biden administration says it’s working on these standards, but they could take weeks to finalize. Officials have stressed there will be no centralized vaccination database, nor a federal mandate to be vaccinated for Covid-19.

Instead, the administration expects this will be driven by the private sector, and say it should be free, private, equitable, available in multiple languages, and safe from being duplicated or forged.

However, while the administration deliberates, vaccine passports are already being crafted in the US, as they have been in other countries. And that may not be without any cracks in the system.

The New York pass, for example, may allow users to check whether someone has received a Covid-19 vaccine, provided you know their birthday and ZIP code.

If you enter the information correctly and that person is in the system, the site may prompt you for more information about where and when they received a vaccine — suggesting to anyone searching that they’ve had at least one dose. If not, the site may tell you, “We couldn’t find your pass,” perhaps indicating that the individual hasn’t had a vaccine or that it hasn’t been entered in the system.

One of the state’s frequently asked questions says, “Can I use this app to see if someone else has been fully vaccinated or tested negative?” The answer: “No. Excelsior Pass is intended for personal use only.” CNN has reached out for comment.

“This is why I think we need federal leadership and oversight of these types of systems, so that we actually are protecting the privacy and security of the nation’s people,” said Rebecca Coyle, executive director at the American Immunization Registry Association.

“Without those standards, anything goes,” Coyle added. “Right now, it’s sort of the Wild West.”

“If you think about any medical record or any vaccination record, chances are it lives in a couple of different places” Coyle said.

First, you should receive your own record of a Covid-19 vaccination, often in the form of a card. The doctor or pharmacy that administered the vaccine keeps their own record, as well.

Plus, Covid-19 vaccination providers are required to submit reports to immunization registries in your state or jurisdiction.

State registries, which have been around for decades, are meant to consolidate records from different providers and serve as a “hub,” Coyle said.

But these registries don’t necessarily communicate with each other. And other federal vaccinating entities like the Department of Veterans Affairs, the Department of Defense and the Bureau of Prisons — “chances are that data is not flowing to the immunization registry today,” Coyle said.

The same may be true for some long-term care or skilled nursing facilities that aren’t participating in the federal vaccination partnership, she added.

A number of other federal programs — which distribute doses to places like community health and dialysis centers — do report doses to state and jurisdictional systems, but certain information may be missing, according to the US Centers for Disease Control and Prevention.

New York state says on its website⁠ that “you must have received a COVID-19 vaccine or negative test result in the state of New York to be eligible to retrieve a Pass.”

While some of this information does funnel up to the CDC, it often does so in a redacted way. “CDC is looking for more of the aggregate, big-picture perspective,” Coyle said.

If you lose your vaccination card, CDC advises that you “contact your vaccination provider directly.” If that’s not possible, reach out to “your state health department’s immunization information system.”

Looking for a ‘national strategy’

“I think it would be very, very helpful to have a better federal system that’s able to keep track of who’s had the Covid vaccine — and for that matter … all kinds of vaccines,” said Dr. Marcus Plescia, chief medical officer of the Association of State and Territorial Health Officials.

Plescia, whose organization doesn’t take an official position on vaccine passports, noted that “we have a longstanding problem with public health information technology.”

When the federal government was planning with states for the Covid-19 vaccine rollout, “some states had very specific legal and policy mandates about what could and couldn’t be shared from their data systems,” Plescia said.

According to Coyle, “Covid is really serving as a motivator to try and get those agreements in place to exchange data across state lines.”

And public health officials could probably solve this problem, she thinks, if not faced with limited resources during an ongoing pandemic.

“We are just sort of underwater,” she said. “And that’s why I think we’re looking for that national strategy.”

Two sides of every coin

Where some states seem to be testing the waters of an immunization passport, others are throwing cold water on the idea.

In addition to New York’s efforts, the Hawaii Gov. David Ige said his state has been working on pilot programs with two companies, CLEAR and CommonPass, that would allow the state to verify the vaccination status of travelers.

But governors in states such as Mississippi, Missouri and Florida have come out against it. On Friday, Florida Gov. Ron DeSantis signed an executive order banning their use in the state, citing freedom and privacy concerns.

“We do know that there is a segment of the population that is concerned that the government will play too heavy-handed of a role in monitoring their vaccinations, and that mandates will be coming from the federal government,” White House senior Covid-19 adviser Andy Slavitt said at a Covid briefing last week. “It would discourage people to feel like that was the role we are playing.”

Plescia said this may be a contentious point, even among health officials.

“There are some people who feel very strongly they do not want the government in their business,” Plescia said. “But then there are other people who don’t want the private sector having a lot of information, that actually would prefer that it be the government … I just feel like there’s two sides to that coin.”

In fact, these concerns were baked into early efforts to build immunization registries. The Clinton administration pushed for the development of state systems, partly spurred by a resurgence of measles in the years before he took office.

“Initially, people talked about having a federal registry system. And my own feeling at the time is, it was going to be very difficult to sell that because people were very uptight about the government having all these data,” said Dr. Walter Orenstein, former director of the National Immunization Program during the Clinton years.

Orenstein said he feared they would get nowhere if they went that route. However, by getting certain states to lead the effort, others would follow — and those that didn’t could be used to compare the impact of these programs. The plan worked: This played a major role in states implementing school vaccine requirements for measles, he recalled, as it became clear that states that implemented school entry laws had fewer measles cases.

“The problem, clearly, is that the state registries … may lack great ways of sharing data with each other,” said Orenstein, now an associate director of the Emory Vaccine Center and a professor of infectious diseases at Emory University School of Medicine.

He said federal leadership will be key as the conversation surrounding passports and data-sharing moves forward — but “to have multiple different groups involved, I just think it’s complicated.”

Orenstein has been calling for better immunization data exchange across states and jurisdictions since long before Covid-19. But he’s optimistic that the pressure of the pandemic could be the impetus we need to find a better way forward.

“What I have found is, unfortunately, tragedies really play big roles if we develop systems to avoid them,” he said. “To me, we should try and take advantage of this crisis to try and think through … what will be the optimal system we would want after this, hopefully, is over?”

CDC vaccine advisers will meet Friday to discuss the J&J vaccine. Here’s what could happen next

The US is vaccinating Americans at a record pace. But here’s why Covid-19 cases and hospitalizations are up

Health worker cover may get renewed soon – Times of India

Johnson & Johnson said blood clots have been reported with all Covid-19 vaccines. The author of the study they cited says they’re wrong.