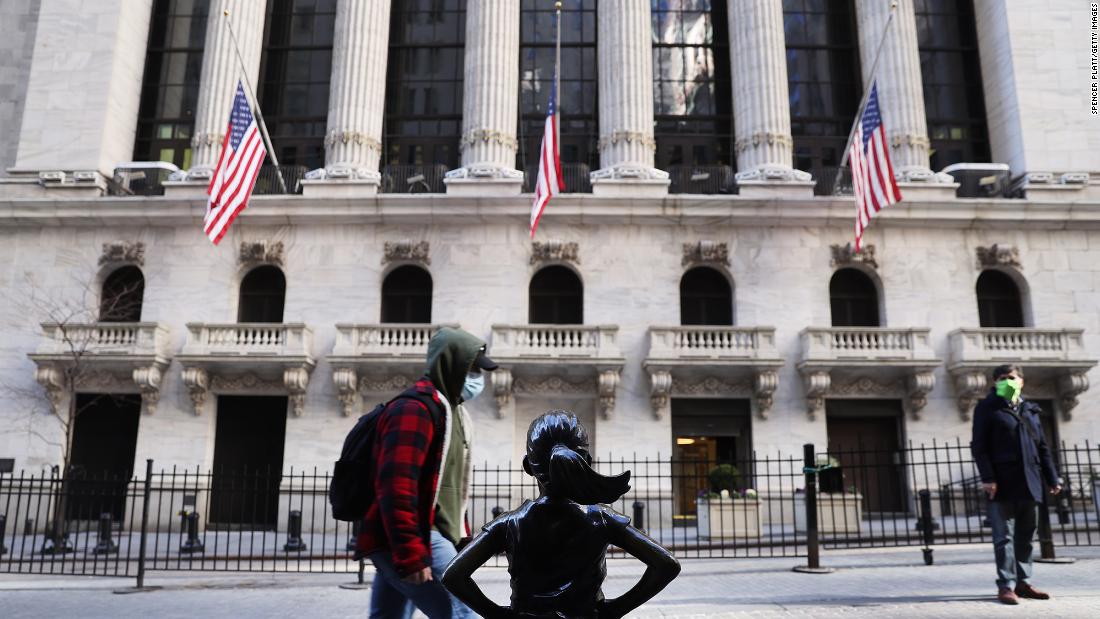 For the first time since February 2020, Covid-19 is no longer the No. 1 fear among portfolio managers surveyed by Bank of America, the bank said Tuesday.

Inflation is now the top risk cited by portfolio managers polled by Bank of America. The second most common concern is taper tantrums, which occur when markets freak out over surging bond yields.

The findings underscore how drastically the situation has changed during the past year. Confidence is growing because of the rollout of vaccines, easing health safety restrictions and unprecedented support from the federal government.

US stocks recovered swiftly from the pandemic. The Dow bottomed at 18,592 on March 23. The index is up a staggering 77% since then. The Nasdaq has doubled over that span.

Goldman Sachs is now calling for the US economy to register China-like GDP growth of 7% on a full-year basis in 2021. That would be the fastest pace for the United States since 1984. And Goldman Sachs expects the US economy will be 8% larger at the end of 2021, compared with the end of last year. By that measure, it would be the fastest GDP growth since 1965.

Almost half (48%) of fund managers polled by Bank of America now expect a V-shaped recovery, up from just 10% who predicted that in May 2020.

A record 91% of sophisticated investors expect a stronger economy, surpassing the confidence signaled after the Trump tax cuts were passed in late 2017 and during the early stages of the recovery from the Great Recession.

Inflation fears surge. But are they overdone?

But all of this optimism — on top of unprecedented stimulus from Congress and the Fed — is making some on Wall Street concerned that the economy could overheat.

The big fear is that resurgent inflation causes the Federal Reserve to rapidly raise interest rates, short-circuiting the economic recovery and the market boom. That’s what happened in the 1970s and early 1980s when the Paul Volcker-led central bank tamed inflation with aggressive interest rate hikes.

A record 93% of fund managers expect higher global inflation over the next 12 months, according to Bank of America. That’s up from 85% who said that in February.

However, US officials have pushed back against inflation fears. Over the weekend, Treasury Secretary Janet Yellen said inflation may move higher, but only temporarily.

“To get a sustained high inflation like we had in the 1970s, I absolutely don’t expect that,” Yellen told ABC.

Ed Yardeni, president of investment advisory Yardeni Research, isn’t overly worried about runaway inflation because about 10 million US workers are still unemployed due to the pandemic.

“A 1970s-style wage-price spiral now is unlikely, in our opinion, notwithstanding the fiscal and monetary excesses of our government,” Yardeni wrote in a note to clients Tuesday.

The tipping point for bond yields

A related risk is a repeat of the 2013 taper tantrum, when Treasury yields spiked after the Fed signaled it would gradually slow bond purchases as the economy recovered. Higher Treasury rates could make stocks look less attractive by comparison.

After crashing to 0.3% last spring, the 10-year Treasury rate recently climbed to 1.6%. The spike in yields unsettled investors, driving US stocks sharply lower before they rebounded.

So how high would yields have to climb to derail the bull market?

Bank of America said 2% on the 10-year Treasury “could be the level of reckoning for stocks.” Almost half of the fund managers surveyed said 2% yields would cause a 10% correction in stocks. Similarly, about half of the investors indicated a 10-year Treasury rate of 2% or 2.5% would make bonds attractive relative to stocks.

Recent action in financial markets is also raising concern about bubble-like behavior. Investors are plowing vast sums of cash into shell companies known as SPACs. IPOs have skyrocketed on their first day of trading. And an army of traders on Reddit was able to catapult shares of GameStop (GME), AMC (AMC) and other companies to untenable highs.