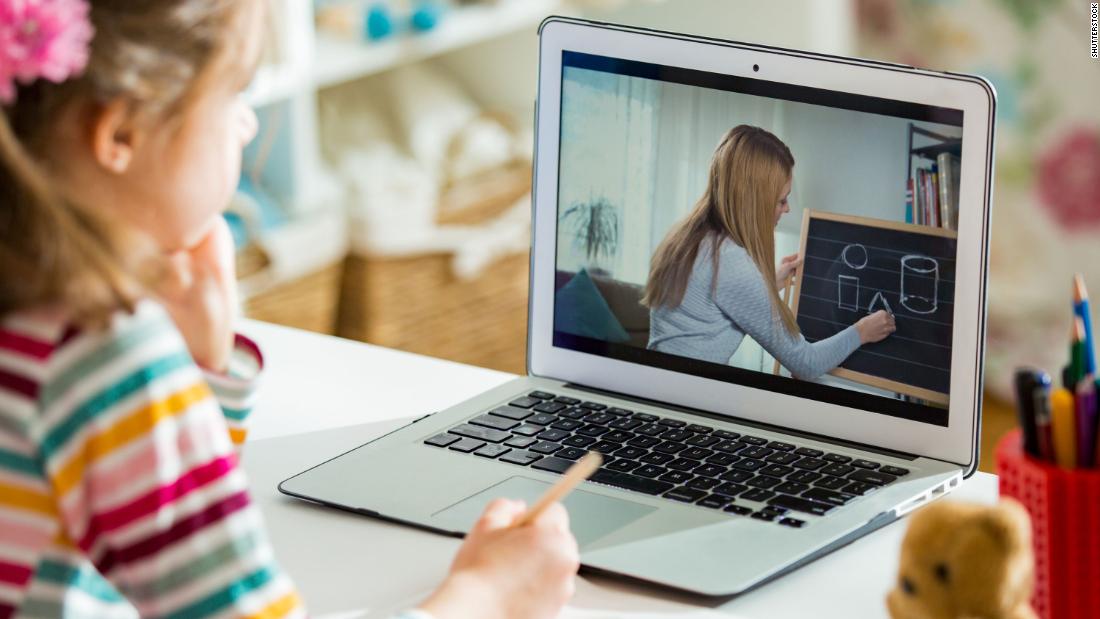 Parents whose children received virtual instruction or a combination of virtual and in-person instruction were more likely to report increased risk on 11 of 17 indicators of child and parental well-being, according to the new CDC study. The agency’s researchers looked at survey responses from October and November 2020 from 1,290 parents with children ages 5 to 12 years old.

“The difference is like night and day, especially for my kids,” Stephanie Kokinos, a mother of two from New York City, said. “I think we’ve normalized this remote way of learning, and there’s nothing normal about it.”

Kokinos has two daughters, ages 5 and 7. She is currently unemployed, and her husband works from home.

“I can’t even begin to think if I was working during this time,” she said. “It really has been a full-time job, just to make sure that their needs are met from an academic standpoint, but more specifically from an emotional and well-being standpoint.”

Since the pandemic began, her kids have had to face four separate school closures and returned in-person again March 19.

“It’s very, very damaging — that back and forth with kids — especially at this age. It’s really hard to put yourself as an adult, having a full functioning frontal lobe, (in their shoes with) what they are experiencing and how they’re acting,” Kokinos said.

“Because you see it differently (in each kid). Some kids are retreating, some kids have kind of lost their spark, they’ve lost their spirit. Some kids don’t have a love for learning anymore,” she said. “They’re burned out, they have headaches, their eyes hurt. They’re not getting social interaction. Their needs are not being met — period.”

Parents are feeling the effects too

This trend held when parents answered questions about their own well-being.

Lauren Dover, from Brighton, Illinois, is a mother of four — ages 11, 6, 4 and 2. She has chosen to do remote learning with her oldest two, Brady in fifth grade and Ben in second grade, since the start of the pandemic.

“I’m a stay-at-home mom, and I think that it was better for our family to do it at home, especially because I know a lot of parents don’t have the option to stay home. So, I wanted them to be able to take that space in the building,” she said.

Although Brady has struggled with missing the social aspect of in-person school due to what in their household they call the “big germ,” Ben has had an even harder time.

“(Ben) is very much an extrovert. When he did pre-K, he was leader of the classroom. He was just the social butterfly — everyone wanted to talk to Ben,” she said. “He has so much energy, and it’s hard for him to be home.”

“I think it definitely varies by student and by situation. We do have some kids who have experienced a lot more trauma than others,” she said.

Specifically, she’s had to pay special attention to the racial trauma some of her students have experienced because they’re in Louisville — where Breonna Taylor was fatally shot by police in March 2020.

Because of that trauma on top of the uncertainty caused by the pandemic and shifting between remote and in-person learning, she’s placed a special emphasis on her students’ mental health.

This appears in her students’ “lunch bunch” session with a mental health counselor. Students also had weekly check-ins with the counselor, where they were provided an online form as a way to ask for help without saying it out loud.

Children who aren’t receiving in-person instruction and their parents “might experience increased risk for negative mental, emotional, or physical health outcomes” and they may need more support to mitigate the effects of the pandemic, the researchers wrote.

Not everyone is ready for yet another change

President Joe Biden’s administration has pushed to reopen schools during the pandemic, and the CDC recently released guidance for K-12 schools about how to open safely for in-person learning.

Josh Fagundes, father to 8-year-old Gideon and 6-year-old Joel, from Palm Coast, Florida, is most worried about what comes next. The new CDC regulations recently released are more of a negative than a positive thing in his household — where his wife’s grandmother, who is 81, lives.

Now, his kids’ schools are moving to a hybrid system — where he said one teacher will serve two classrooms, virtual and in-person, at the same time.

“I’m sitting here trying to balance, do we try and roll the dice and put our kids in school? At the risk of everything? Or do we go into this knowing that invariably, it’s only going to be harder for this last push to the end of the year? It’s only going to get more difficult,” Fagundes said.

Experts say heading back to in-person school won’t be good for every child’s mental health. Some children who were teased or bullied in school or felt freer to express themselves at home outside of their schools’ social hierarchies won’t necessarily want to go back.

Lenore Skenazy, president of Let Grow, and founder of the Free-Range Kids movement, spoke with CNN at the start of the pandemic on why some kids were experiencing positive benefits related to their mood during remote learning.

Some of these benefits children may have seen at the start of the pandemic may still be in play — like an increase in independence and better skills like executive function: the ability to plan, problem-solve and follow through.

“Just because we were used to kids attending school in person five days a week and then spending a lot of the rest of their time in adult-organized, adult-led activities, doesn’t mean that that was the only — or best — way for kids to spend their childhood,” Skenazy said.

For parents struggling to navigate this difficult time, Skenazy recommends they think back to their own childhoods and zero in on the extra time their children may have outside of remote classes.

“When kids are explaining games or making up new ones, they are building their communication skills. Baking? Basic math skills. Helping around the house teaches responsibility, without which it is hard to succeed at school — or anywhere,” she said.

“So, I’d love parents to feel good about the ‘down time’ of this strange year, and recognize the growth their kids are experiencing, even when things seem disjointed and kind of crazy and the remote learning part is not going that great.”

The US made little progress this week in preventing more Covid-19 deaths, an influential forecasting team says

Nearly half of US states reported an increase in Covid-19 cases this week. Here’s what experts say can help stop another surge