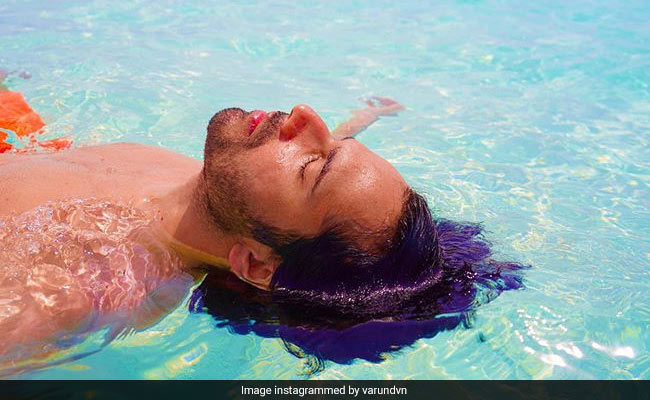 Did you see Varun Dhawan‘s latest post on Instagram? It perfectly sums up his current “state of mind.” The actor, on Tuesday, posted a photo that appears to be from his trip to Maldives. In the picture, Varun Dhawan can be seen relaxing with his eyes closed in the serene waters. The breathtaking view in the background made the picture surreal. “State of mind,” the actor wrote in the caption with a water drop icon. His fans can’t get enough of the image. They flooded his post with comments like “Your Maldives pictures are pure bliss” and “the hottest actor.” Many just dropped multiple fire emojis in their comments.

Now that we have mentioned about Varun Dhawan’s Maldives vacation, we will also show you other pictures of the actor from his trip to the Maldives that drove his fans crazy. Take a look:

Varun Dhawan made his debut in Bollywood with Karan Johar’s 2012 film Student Of The Year. He went on to star as a lead actor in films such as Main Tera Hero, Humpty Sharma Ki Dulhania, Badlapur, Badrinath Ki Dulhania, Judwaa 2, October, Sui Dhaaga and Street Dancer 3D.

Varun Dhawan was last seen in Street Dancer 3D, in which she co-starred with Shraddha Kapoor. The film was directed by Remo D’Souza. The actor’s upcoming films include his father David Dhawan’s Coolie No.1. He will share screen space with Sara Ali Khan in the film, which is a remake of his father’s 1995 film of the same name. Varun Dhawan has also recently collaborated with Raj Mehta for a new film, in which he will co-star with Anil Kapoor.

Did Varun Dhawan change after getting married to Natasha Dalal? Here’s what Kriti Sanon has to say – Times of India

Exclusive! Is Kartik Aaryan’s ouster from ‘Dostana 2’ the outcome of his fluster over Janhvi Kapoor cutting off all ties with him? – Times...

#AgainstAllOdds! Shikha Talsania: There have been times where I’ve been told that if I don’t lose weight, I won’t get the part – Times...

Sonam Kapoor has the sweetest birthday wish for Varun Dhawan; Shares an UNSEEN picture from his wedding and calls him ‘a bonafide filmy soul’...