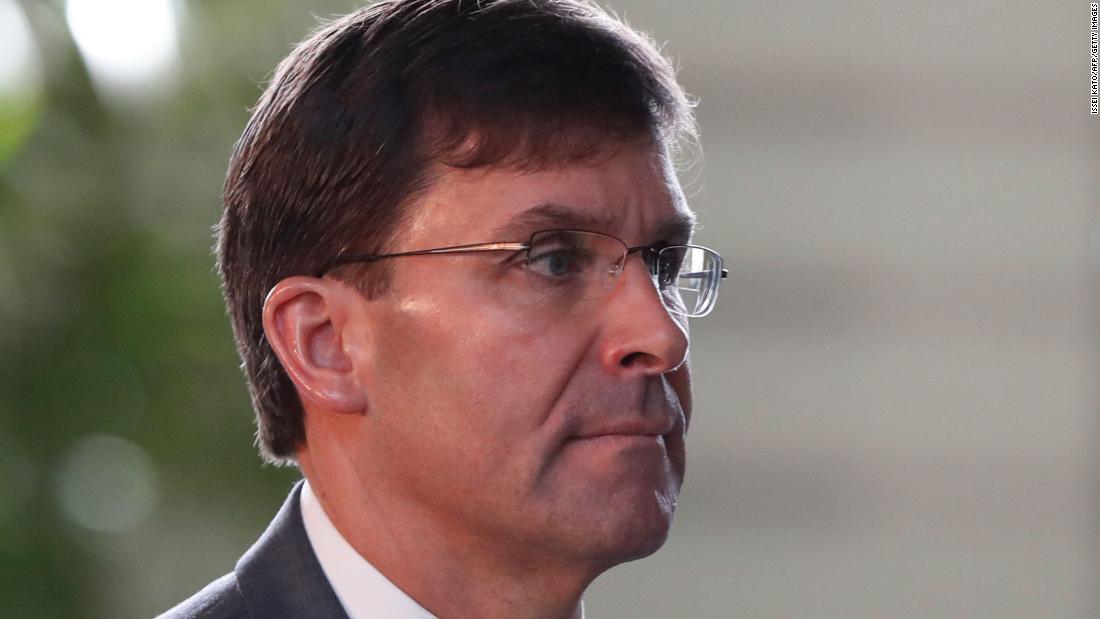 Esper arrived in Tunisia to meet with top officials, including the country’s president, Kais Saied, and to lay a wreath and give a speech at a World War II cemetery to honor US service members who fell during the North African campaign.

The trip was not announced until after Esper departed the country.

Tunisia which has been touted as the sole democratic success story to come out of the 2011 “Arab Spring,” was designated “a major-non NATO ally of the United States” in 2015 and has partnered with the US on counterterrorism efforts aimed at ISIS-linked groups.

During a meeting at the Tunisian Defense Ministry, Esper and his counterpart signed a “ten-year Roadmap of Defense Cooperation.”

“The United States will continue to deepen our alliances and partnerships across the continent, including with Tunisia, where your democratic government and sovereignty have made much of our work in the region possible,” Esper said during his speech at the North Africa American cemetery and memorial in Carthage.

“We look forward to expanding this relationship to help Tunisia protect its maritime ports and land borders, deter terrorism, and keep the corrosive efforts of autocratic regimes out of your country,” he added.

The US has worked to help Tunisia secure its border with Libya which has been beset by civil war and recently deployed 40 American military advisers to the country, part of a the Army’s Security Force Assistance Brigade, in order to aid Tunisia’s fight against terrorist groups which have carried out high profile attacks in the country since 2011.

The US is also Tunisia’s largest supplier of weapons, providing nearly 50% of all arms imports from 2015 to 2019 according to the Center for International Policy and in February the Trump Administration approved the sale of four AT-6C Wolverine light attack aircraft to Tunisia, an arms package estimated to cost $325.8 million.

While in North Africa, Esper is seeking to push back on Russian and Chinese activity in the region, according to defense officials.

“Today, our strategic competitors China and Russia continue to intimidate and coerce their neighbors while expanding their authoritarian influence worldwide, including on this continent,” Esper said.

The US has accused China of seeking to expand its influence in the region via predatory loans and the US military has accused Moscow of deploying Russian mercenaries and fighter jets to bolster Libyan Gen. Khalifa Haftar, the commander of the self-styled Libyan National Army, one of the belligerents in that country’s civil war.

“Together we continue to counter the malign, coercive, and predatory behavior of Beijing and Moscow, meant to undermine African institutions, erode national sovereignty, create instability, and exploit resources throughout the region,” Esper said.

Esper also visited the island republic of Malta Tuesday, becoming the first US defense secretary to visit there since President Richard Nixon’s Secretary of Defense Mel Laird visited in 1970, just six years after the country became independent of the UK.

While in Malta, Esper on Wednesday met with the country’s Prime Minister Robert Abela and President George Vella.

While Malta’s military is small, totaling some 2,000 personnel, it sits in a strategic location off the coast of North Africa and possesses a significant port and was until the 1970s was the site of a major UK Royal Navy installation.

A senior defense official told CNN that Esper planned to discuss maritime security with Maltese officials, a major issue given the country’s proximity to shipping and smuggling lanes connecting Europe to North Africa.

Trump says he’ll campaign against Murkowski in Alaska next year

Everything You Need to Know About NFTs

Tech The News Article - March 7, 2021 0
NFT or Non-Fungible Tokens are cryptocurrency assets that represent a wide range of unique items, both physical and virtual like real estate...