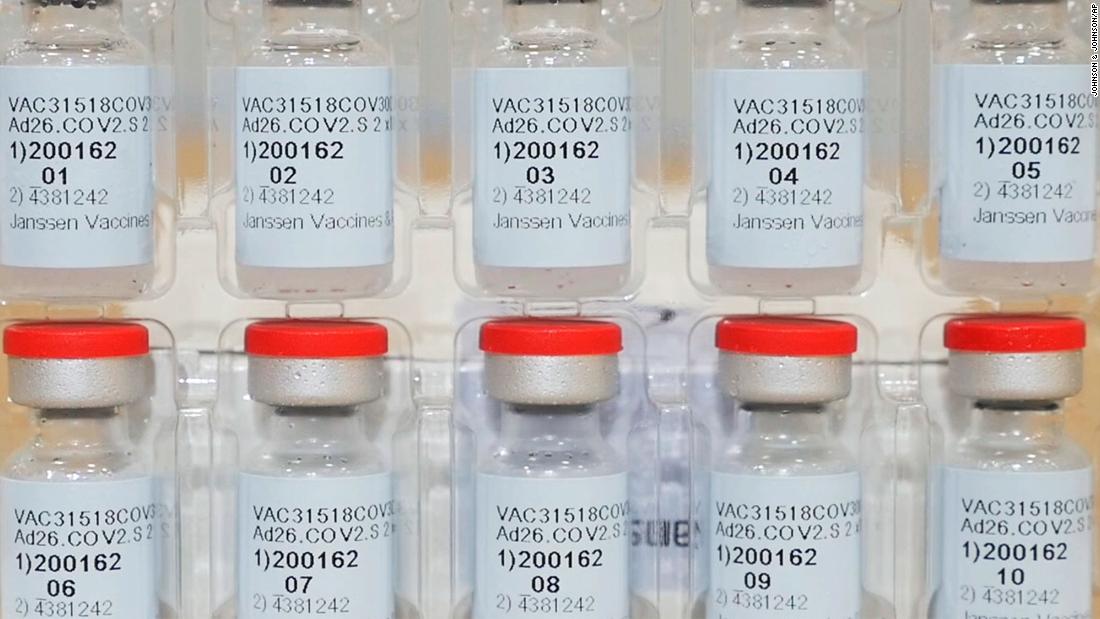 “Starting tonight, 3.9 million doses of J&J will be distributed across all channels, states, tribes, territories and pharmacies and community health centers,” one senior administration official said in a Sunday night briefing call. “Those J&J doses will be delivered as early as this Tuesday morning.”

“As a one-dose vaccine, people do not have to return for a second dose to be protected,” CDC Director Dr. Rochelle Walensky said Sunday. “In addition, this vaccine does not need to be kept in a freezer and can be stored at refrigerated temperatures — so it is easy to transport and store and allows for expanded availability in most community settings and mobile sites, as supply scales up.”

While the official said Johnson & Johnson told the White House the weekly supply of vaccines will be limited over the next couple of weeks after the initial distribution, experts hope the additional doses will help boost vaccination numbers and aid the country in its race to vaccinate as many Americans as possible before another predicted Covid-19 case surge.

“There’s a kind of new urgency to it,” Dr. Eric Rubin, a member of the FDA vaccine advisory committee and a professor at the Harvard T.H. Chan School of Public Health, told CNN Sunday. “Because there are new viral variants coming out right now, with some chance that some of them could eventually become somewhat resistant to the protection provided by vaccines, it’s really important to get it out there fast.”

More than 2,460 cases of coronavirus variants first spotted in the UK, South Africa and Brazil have so far been reported in the US, according to CDC data.

The vast majority of these cases — 2,400 — are of the highly contagious variant known as B.1.1.7. The variant was first detected in the UK, and the CDC has previously warned it will likely become the predominant variant in the US this month. The agency has previously said these numbers do not represent the total number of variant cases circulating in the US, but only those that have been found by analyzing positive samples.
Several experts have already sounded the alarm about a possible surge fueled by the B.1.1.7 variant that could be just weeks away.
One report from Dr. Michael Osterholm and his colleagues at the University of Minnesota’s Center for Infectious Disease Research and Policy said the proportion of cases of this variant are increasing rapidly in parts of the US, and a “major peak in cases, hospitalizations, and deaths in the near future remains a strong possibility.”

Walensky, the CDC director, warned late last week it was possible the US was seeing the “beginning effects” of the spread of variants, with a recent steep decline in cases now seemingly slowing down.

On Sunday, she said the Johnson & Johnson vaccine comes “at a potentially pivotal time.”

“CDC’s latest data suggest that recent declines in COVID-19 cases may be stalling and potentially leveling off at still very high numbers,” Walensky said in a statement. “That is why it is so critical that we remain vigilant and consistently take all of the mitigation steps we know work to stop the spread of COVID-19 while we work our way toward mass vaccination.”

Here’s how many Americans have been vaccinated

For now, mass vaccination is still quite a ways away.

More than 49.7 million Americans have gotten at least their first dose of a Covid-19 vaccine, CDC data shows.

More than 24.7 million have received both doses, according to the data. That’s roughly 7.5% of the US population.

Track Covid-19 vaccinations in the US
While states across the country have struggled with supply shortages — among other challenges in getting shots in arms — officials remain hopeful vaccinations will only continue ramping up with more doses on the way.
Pfizer and Moderna have pledged to make a combined total of 220 million doses available for shipment by the end of this month. And Johnson & Johnson has pledged to make 20 million doses available in the same time frame.

Johnson & Johnson said blood clots have been reported with all Covid-19 vaccines. The author of the study they cited says they’re wrong.

The US made little progress this week in preventing more Covid-19 deaths, an influential forecasting team says

Biden administration to provide $150 million to boost Covid response in underserved and vulnerable...

Top Stories The News Article - April 19, 2021 0
"To get resources to health care providers serving at-risk populations and to promote equitable distribution of vaccines, today (the Department of Health and...