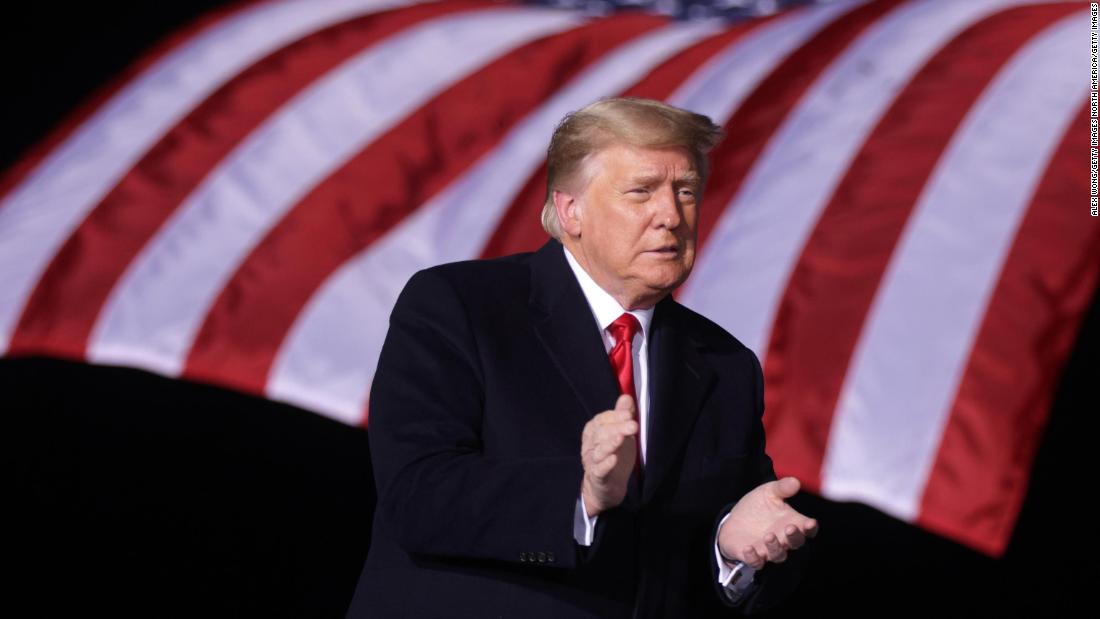 “I stand before you today to declare that the incredible journey we began together four years ago is far from over,” Trump is expected to say in Orlando, Florida, according to excerpts of his remarks released before the speech.

In his first public comments since leaving the White House, Trump plans to target President Joe Biden, attacking his immigration policies and demanding that he “get the schools open right now.”

“The future of the Republican Party is as a party that defends the social, economic, and cultural interests and values of working American families — of every race, every color, and every creed. Republicans believe that the needs of everyday citizens must come first,” the former President plans to say.

Trump won the unscientific straw poll of CPAC attendees when they were asked who they favored as 2024 GOP presidential candidates. But the results suggest that there is interest in other potential candidates. Two polls were conducted, one that included Trump’s name and one that did not. In the straw poll that included Trump, 55% of attendees said they preferred the former President as their nominee for 2024, another 21% favored Florida Gov. Ron DeSantis, while South Dakota Gov. Kristi Noem was third with 4%.

In a second poll that excluded Trump, DeSantis was far ahead of the other contenders at the event that took place in his home state. In that poll, 43% of CPAC attendees supported DeSantis, a close ally of Trump. Noem was second with 11%, followed by Donald Trump Jr. at 8%, then former Secretary of State Mike Pompeo and Texas Sen. Ted Cruz with 7% each.

The overwhelming majority of CPAC attendees who participated in the gathering’s informal surveys said they approved of the job that Trump did as president. But only 68% said they wanted him to run again in 2024; 15% said they don’t want the former President to vie for the GOP nomination and 17% said they were unsure — indicating the opening for a fresh face within the party.

While charting his next political act over the past month from his post-presidential retreat at Mar-a-Lago in Palm Beach, Trump has refused to take any responsibility for his role in inciting his supporters to violence during the January 6 storming of the Capitol during the certification of the November election results — an event that has exacerbated divisions within the GOP about Trump and his role in the party moving forward.
“The Republican Party is united,” Trump plans to say Sunday at the gathering, which has served as an audition for other potential Republican presidential hopefuls. “The only division is between a handful of Washington DC establishment political hacks, and everybody else all over the country.”
But GOP Sen. Bill Cassidy — who voted to convict Trump earlier this month — said Sunday that he believes if the Republican Party focuses on Trump to win back seats in 2022 and the presidency in 2024, “We will lose.”

“If we idolize one person, we will lose,” the Louisiana Republican told CNN’s Dana Bash on “State of the Union.” “And that’s kind of clear from the last election.”

Although he has prominent critics in the party, most GOP leaders have stood by Trump as state and local party officials have moved to censure Republican lawmakers who favored his impeachment. The former President has been holding court in Florida not only with one-time aides like his former campaign manager Brad Parscale, but also visitors like House Minority Leader Kevin McCarthy, who has pledged to work with Trump to regain the majority in 2022, and Republican National Committee Chairwoman Ronna McDaniel.
When asked about Republican losses in November, McDaniel defended Trump during an interview Sunday on CBS News’ “Face the Nation” and touted his policy agenda, stating that “voters are saying overwhelmingly they agree with what President Trump did in office.” After meeting with Trump last week, she said she wasn’t sure if Trump would run again in 2024.

“That’s going to be a decision he’s going to have to make down the road. I do know he’s committed to helping us win back majorities in 2022, which is, of course, what I’m focused on right now,” she said.

In a sign of Trump’s standing in the Republican party, even Senate Minority Leader Mitch McConnell, who blamed Trump for the insurrection in a Senate floor vote after voting to acquit him, told Fox News last week he would “absolutely” support the former President if he became the GOP presidential nominee in 2024.

Foreshadowing Trump’s influence on the 2022 races, McCarthy lavished praise on Trump during a Saturday panel at CPAC, crediting him with Republicans’ better-than-expected showing in the 2020 House races: “We got closer than anybody thought we could get… No one said we’d win seats,” McCarthy said of GOP efforts to win the majority last November. “But this is the little secret. You know why we won that? President Trump worked on all these races.”

Indiana GOP Rep. Jim Banks, the chairman of an influential group of House conservatives, took a shot at Republicans who have been disloyal to Trump during the same panel, warning that efforts to curtail his influence could harm the party in 2022 as they try to regain the majority in the US House and the Senate.

That certainty about Trump’s reign in the Republican Party will embolden the former President as he seeks to put his imprint on the upcoming elections. After raising millions of dollars off his false claims of election fraud, Trump is weighing the creation of a new super PAC that could raise unlimited amounts of money with very few restrictions, CNN’s Fredreka Schouten and Jim Acosta reported Saturday.

In filings with the Federal Election Commission Saturday, Trump also expanded his potential reach by converting both his presidential campaign committee, Donald J. Trump for President, and his leadership PAC, Save America, into two political action committees that can support other candidates for office.

In the discussions with aides about the 2022 midterms and future election cycles, Trump has been weighing how to exact revenge on the House members and Senators who cast impeachment votes against him — and the new committees could serve as his vehicle for doing that.

He made one of his first steps in that direction Friday when he threw his support behind Max Miller, who is challenging one of the House members who voted to impeach Trump — Ohio Rep. Anthony Gonzalez. Explaining his reasons for running Friday, Miller charged that Gonzalez “betrayed” his Northeast Ohio constituents when he voted to impeach the former President.

The deference to the former President after the events of January 6 that stunned the world has underscored Trump’s firm command of the party’s base even as much of America recoiled from his election lies and his dangerous maneuvering to overthrow the democratic process.

The fealty to Trump has been on full display throughout CPAC, where panel discussions revived Trump’s debunked claims of election fraud and many of the speakers downplayed the devastating effects of the Covid-19 pandemic — in keeping with the former President’s pattern — with many speakers portraying restrictions to stop the spread of the virus as an infringement on Americans’ personal liberties.
Though polls showed a dip in Trump’s support after the Capitol insurrection, his approval ratings among Republicans have since rebounded. Three-quarters of Republicans said they wanted to see Trump play a prominent role in the GOP going forward, according to Quinnipiac University Poll released earlier this month, even though 68% of Americans said the former President did not do enough to stop the insurrection.

Trump’s speech at CPAC will also give him another shot at revisionist history about his handling of the Covid-19 pandemic not long after the nation marked 500,000 deaths from coronavirus. Speakers at the political conference have largely panned President Joe Biden’s $1.9 trillion relief package, which narrowly passed the House early Saturday morning with all Republicans and two Democrats opposing the bill.

CPAC attendees stood to applaud Noem when she criticized Dr. Anthony Fauci, the nation’s top infectious disease specialist, Saturday. “I don’t know if you agree with me, but Dr. Fauci is wrong a lot,” the former congresswoman said.

Noem has risen to prominence within the GOP over the past year by refusing to issue stay-at-home orders in her sparsely populated state and rejecting calls for government mask mandates.

“In South Dakota, I provided all of the information that we had to our people and then I trusted them to make the best decisions for themselves, for their families and, in turn, their communities,” Noem said Saturday. “We have to show people how arbitrary these restrictions are — and the coercion, the force and the anti-liberty steps that governments take to enforce them.”

Biden offered a diametrically different message about fighting the virus on Saturday morning as he hailed the passage of his relief package in the House: “We have no time to waste. If we act now, decisively, quickly and boldly, we can finally get ahead of this virus.”

“We can finally get our economy moving again, and the people of this country have suffered far too much for too long,” Biden said in remarks at the White House. “We need to relieve that suffering.”

This story has been updated.

Jim Acosta and Eric Bradner contributed to this report.