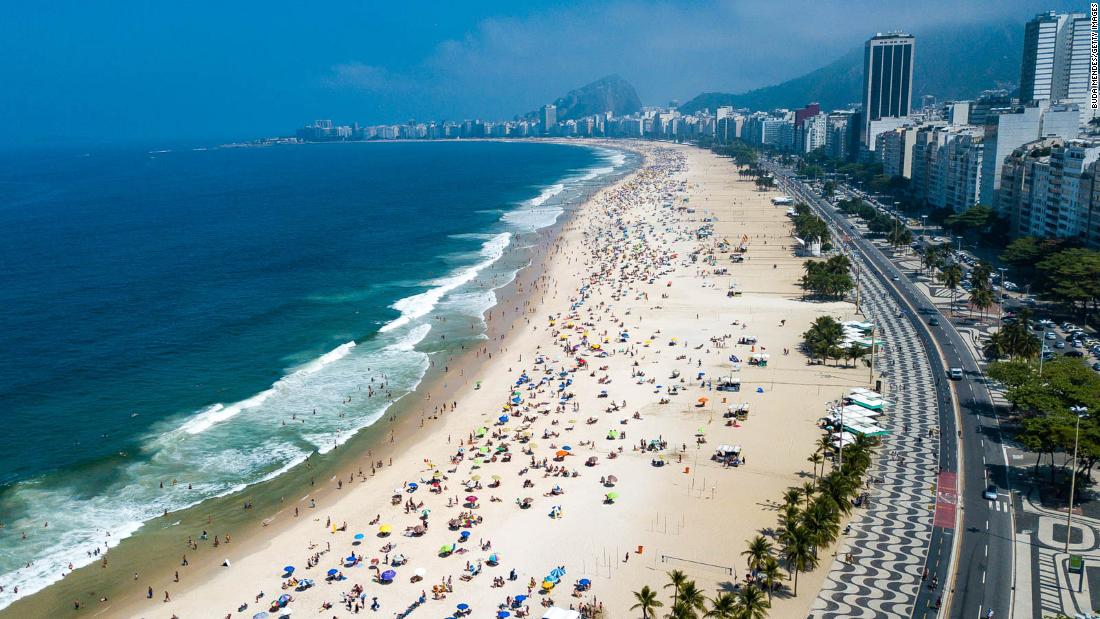 Editor’s Note — Coronavirus cases remain high across the globe. Health officials caution that travel increases your chances of getting and spreading the virus. Staying home is the best way to stem transmission. Below is information on what to know if you still plan to travel, last updated on April 8.

(CNN) — If you’re planning a trip to Brazil, here’s what you’ll need to know and expect if you want to visit during the global coronavirus pandemic.

Brazil has been one of the hardest hit countries by the pandemic. It holds the second highest death toll in the world, second only to the United States, and the Brazilian variant of Covid-19 is rapidly spreading around the globe, thought to be more contagious.

This is a bucket list destination — a country that really does have everything. Beachside Rio de Janeiro is one of the world’s most beautiful cities, capital Brasilia is a whirl of modernist architecture, and Salvador is the heart of Afro-Brazilian culture. There are some of the best beaches on the planet, plus, of course, the main part of the Amazon rainforest — which visitors can help protect, by contributing toward the conservation economy.

Almost everyone. Brazil’s government has been infamously relaxed about the pandemic — and that includes border control. Following a brief closure in 2020, the borders are now open, including to almost all tourists, for stays of up to 90 days.

British visitors are out of luck — Brazil has banned flights to and from the UK since the announcement of the English variant of Covid-19, and nobody who has been in the UK in the past 14 days can go, other than residents, family members of Brazilian nationals, and some business travel.

What are the restrictions?

If flying, before boarding, all arrivals must present a negative PCR test performed within 72 hours, and a traveler’s health declaration form to their airline before boarding (the airline will distribute the form).

Land and sea borders are closed to non-residents, unless en route to fly home. In that case, travelers must get authorization in advance, present a note from their own embassy or consulate authorizing their crossing at the border, show the plane ticket and go straight to the airport.

There is no quarantine on arrival. Even quarantine for those with symptoms is voluntary.

Dire. Throughout the pandemic, Brazilian President Jair Bolsonaro has criticized the use of masks and threatened governors who adopt lockdown measures, and as of April 8 the country has had nearly 13.2 million cases, and 340,776 deaths.

In nearly every state across Brazil, occupancy rates in intensive care units (ICUs) are at or above 80%. Some of them are at or above 90%, and a few have have exceeded 100% occupancy, forcing them to turn some patients away.
On March 25, Brazil’s Health Ministry reported the figure of more than 100,000 new Covid-19 cases confirmed in a single day — the country’s highest such figure since the pandemic began.

The country in the grip of a new wave, and scientists have said that the country is in its worst state so far.

Manaus, the capital of Amazonas state in the Amazon region, has been hit hard, with hospitals here running out of oxygen in January. The Brazilian variant is thought to have emerged here, after it had been thought that the area might even have been approaching herd immunity.

Brazil has currently fully vaccinated 2.4% of the population.

What can visitors expect?

The Brazilian government has done little to limit the spread nationally, but individual states have introduced measures — São Paulo state, for example, closed everything other than essential services for Christmas and New Year, and Minas Gerais also imposed harsh restrictions.

Currently there are lockdown restrictions in Rio de Janeiro, São Paulo, and Minas Gerais all opposed by Bolsonaro but introduced by local authorities.

In fact, Bolsonaro’s administration filed a suit in Brazil’s Supreme Court declaring that only the federal government has the right to impose such restrictions.

The court sided with the states, however, calling Bolsonaro’s argument “totalitarian.”

As such, restrictions vary in each area, so it’s worth checking the current status of the particular location before you go.

There are increasing clamors for a national lockdown, with over 500 prominent Brazilian bankers, economists and politicians recently publishing an open letter in the country´s biggest newspapers asking the federal government to rethink its approach to the pandemic.

Australia in ‘no hurry’ to open borders to visitors