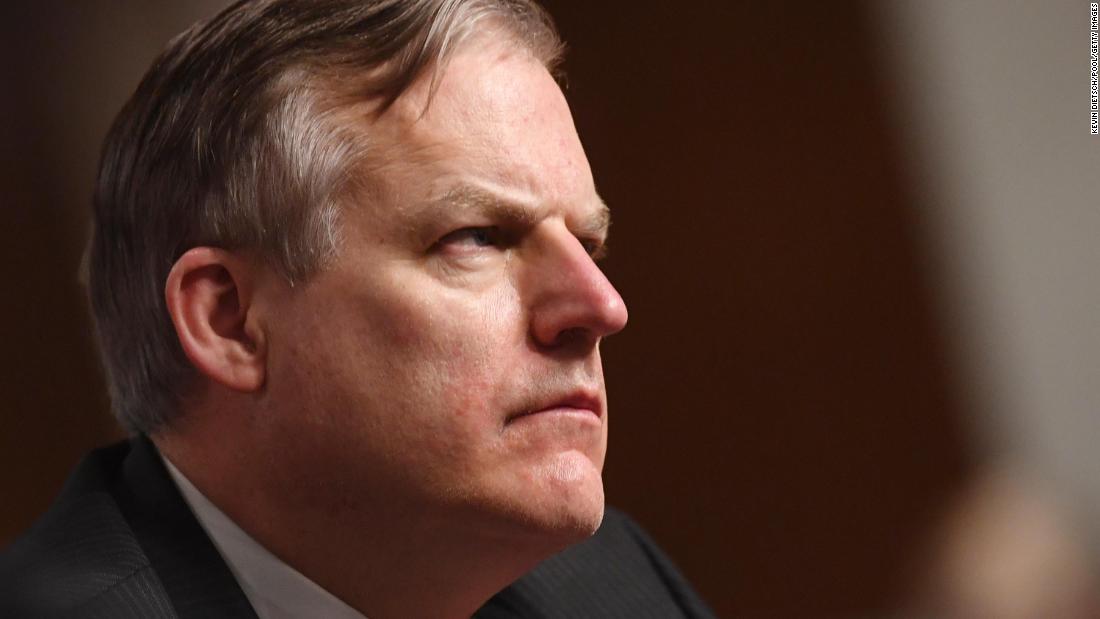 Anderson has been serving as the acting Under Secretary of Defense for Policy since John Rood was fired by the Trump administration in February due to disagreements on a range of policy issues.

It was not immediately clear whether Anderson was asked to resign.

In his farewell message to members of his staff Anderson said, “I leave knowing that the team will preserve, regardless of what lies ahead. I encourage everyone to remain mission focused, apolitical, and never to forget your oath of office.”

The President jettisoned Esper two days after his Democratic opponent Joe Biden was projected as the winner of the presidential election, a conclusion that Trump has refused to accept.

Knowledgeable sources told CNN’s Jake Tapper that the White House now seems focused on going after Esper’s undersecretaries at the Defense Department in the wake of his ouster on Monday.

The sources said the effort may be because Esper and his team were pushing back on a premature withdrawal from Afghanistan that would be carried out before the required conditions on the ground were met, and other pending security issues.

US military officials have long stressed that the US withdrawal from Afghanistan is conditions based, with those conditions including the Taliban’s breaking its ties to al Qaeda and making progress in peace talks with the Afghan government, two conditions that have yet to be met.

But despite the lack of progress, the Trump administration has already substantially reduced US troops in Afghanistan to about 4,500, the lowest levels since the earliest days of the post 9/11 campaign.

Doubts over future of other senior national security officials

Esper’s firing raised concerns that other top national security officials who have earned Trump’s wrath may be vulnerable.

CNN reported Monday that Trump and some of his conservative allies have become increasingly frustrated with CIA Director Gina Haspel in recent weeks, accusing her of delaying the release of documents they believe would expose so-called “deep state” plots against Trump’s campaign and transition during the Obama administration, according to multiple current and former officials.

FBI Director Christopher Wray has also provoked Trump’s ire, fueling some uncertainty about his future, according to the same sources.

Trump tapped Christopher Miller, the director of the National Counterterrorism Center, to lead the Pentagon for what will likely be the remainder of his administration.

Miller has been a driving force behind some of Trump’s policies targeting Iran and its proxy group Hezbollah, as well as counterterrorism efforts linked to the wars in Syria and Iraq. Prior to heading the NCTC, Miller was director of counterterrorism at the National Security Council.

An Iowa native and retired US Army officer, Miller has also served as a deputy assistant secretary of defense. Miller was seen arriving at the Pentagon Monday afternoon and, soon after, met with Milley and other top staff for critical briefings on issues such as the nuclear codes and military operations around the world. Miller told officials to not expect “significant changes at this time,” the official said.

Analysis: Questions grow about discrimination’s role in the hurdles Biden’s nominees are facing

India has potential to take world back to eco-friendly toys: PM Modi – Times...

Education The News Article - February 27, 2021 0
NEW DELHI: Prime Minister Narendra Modi on Saturday said that the ancient toy culture of the country reflects the practice of reuse and...