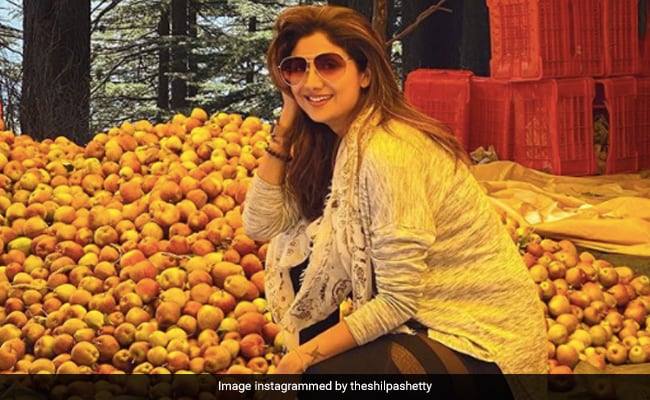 Seen Shilpa Shetty‘s latest Instagram post yet? It’s epic. The actress, who was filming her new project Hungama 2 in Manali last month, shared a page from her shoot diaries on Wednesday and it will make you drool, definitely. Remember how Shilpa Shetty, through her Instagram stories and posts previously, showed that the best part of shooting in Manali was that she got to visit apple orchards? Well, her latest is just another example of her love for apples. In the picture, Shilpa Shetty can be seen posing next to a pile of apples. “In frame: Main aur mere sabar ke dher saare phal,” she hilariously captioned the throwback picture.

Reacting to the actress’ post, Abhimanyu Dassani, who will co-star with her in Nikamma, commented: “Guess you’ll never need a doctor.”

In October, Shilpa Shetty shared a video from her visit to an apple orchard, in which she can be seen plucking an apple from a tree and eating it right away. Sharing the video, she wrote: “Apple picking – #ManaliDiaries. Apple, apple everywhere. I know I get a lil crazy and excited when I see fruits on a tree… and that too all over the place… felt like a child in a candy shop. The trees were laden with such luscious fruits that I couldn’t resist plucking one off and eating it right there. ‘Seb’ the best for the end, they said. I agreed!”

Meanwhile, check out what else Shilpa Shetty has shared from her “Manali diaries.“

Shilpa Shetty and her co-stars, including Paresh Rawal, Meezaan Jaaferi and Pranitha Subhash, shot parts of Hungama 2 in Manali last month. The film is a sequel to Priyadarshan’s 2003 film Hungama. He is also directing the sequel.

Shilpa Shetty, Back On Hungama 2 Set, Pays An Ode To “OG Queen” Helen