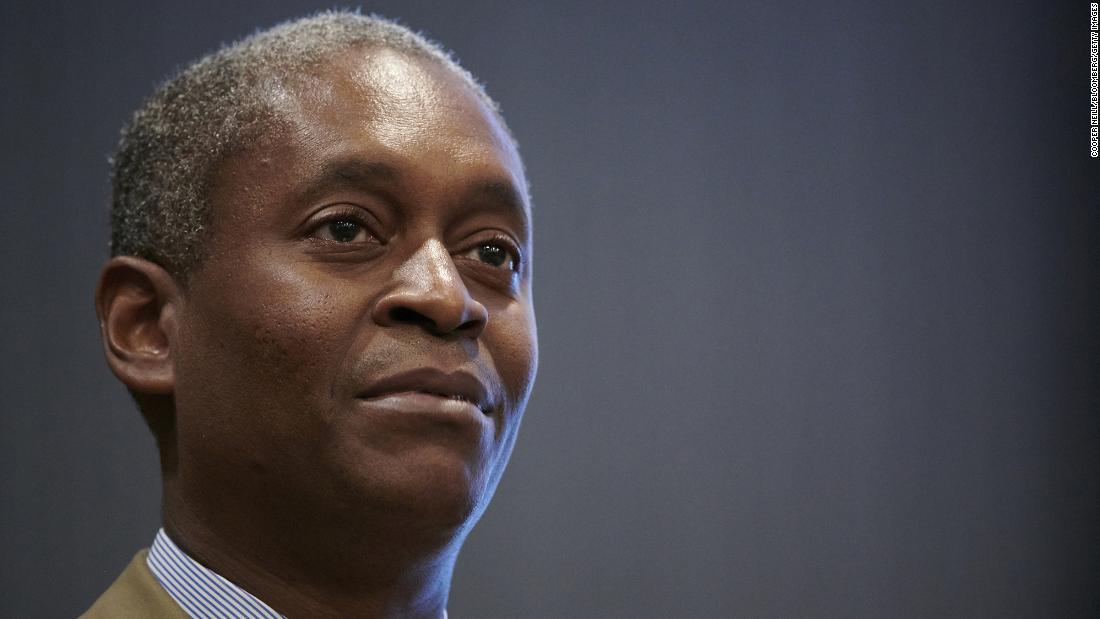 “There are definitely merits to it in the sense that, if people have been harmed by laws, then there should be a discussion about redress,” Bostic told CNN Business in an exclusive interview.

“We have African Americans today who have a lot less wealth,” he said, “in part because they have not been able to inherit the wealth that would have accrued had their ancestors been able to accrue that wealth.”

Even though redlining — an illegal form of lending discrimination — has been banned for decades, consumer advocates argue the practice lingers through predatory lending. Today, there is a 30-percentage point gap between Black and White homeownership, higher than the gap that existed in 1960, according to the Urban Institute. Last week, the Chicago suburb of Evanston, Illinois, approved the nation’s first reparations program for Black residents. Paid for by a 3% tax on legalized cannabis, the program provides funding for home loans to residents who can demonstrate harm from decades of discriminatory housing practices.

“We had to do something radically different to address the racial divide that we had in our city, which includes historic oppression, exclusion and divestment in the Black community,” Alderman Robin Rue Simmons told CNN last week.

Bostic called the idea “quite interesting” and “creative,” especially because it’s explicitly tied to those who can show they have been hurt by racism.

“This is an interesting idea that many others should be thinking about as we move forward,” he said.

Until recently, the idea of the federal government paying reparations was well outside of mainstream political thought. For decades, politicians tried and failed to get the federal government to even study such a program. However, the push to explore reparations is gaining momentum — and prominent supporters.
In 2019, Democratic Rep. Sheila Jackson Lee of Texas sponsored legislation that would establish a commission to study the consequences and impact of slavery and make recommendations for reparations proposals.
President Joe Biden supports studying whether descendants of slaves should receive reparations, the White House said in February. Last month a House Judiciary subcommittee held a hearing to discuss a federal commission that would explore how the US government might compensate descendants of enslaved Americans. Earlier this month, Amalgamated Bank became the first major US bank to announce its support for reparations.

Federal Reserve officials, including Bostic, have previously said little on the merits of reparations.

However, a working paper released earlier this year by the Minneapolis Fed concluded that reparations in the form of direct wealth transfers will not eliminate the racial wealth gap in the future, underscoring the deep-seated consequences of discrimination.

The logic behind that conclusion, the paper’s author wrote, is that “century-long exclusions” would lead Black families to “enter into reparations with pessimistic beliefs about risky returns and to forego investment opportunities.”

Bostic, who is also the first openly gay Fed president, said he “obviously” has faced racism and discrimination in his own life and career.

“If you’re an African American, people are going to judge you by how you look,” he said. “In certain situations, that means you’re going to be under different types of scrutiny.”

Bostic grew up in New Jersey and graduated from Harvard University in 1987. He earned a doctorate in economics at Stanford University. Bostic urged those facing discrimination not to let themselves be held back.

In 1995, Bostic joined the Fed’s research department, where he studied the Community Reinvestment Act. He later worked at the US Department of Housing and Urban Development. He joined the Atlanta Fed in 2017 from the University of Southern California, where he was a department chair in the university’s school of public policy.

Bostic acknowledged that the field of economics can be “difficult” for minorities and women because the culture is “sometimes not as embracing and understanding” of the challenges facing those groups.

“There were definitely times where I wondered whether this was really for me,” he said.

Yet Bostic said his passion for understanding how markets and cities work helped him persevere. “That trumped that frustration and gave me the drive to continue to push through,” he said.

The lack of diversity in the upper echelon of America’s financial regulators is remarkable. Only 10 Black men or women have been appointed to lead those agencies since the 1930s, according to research published last year by the Brookings Institution.

Bostic was reportedly in the running to be Biden’s Treasury secretary. The Fed, one of the most powerful institutions in the world, has never been led by a person of color.

Asked if he would like to run the Fed one day, Bostic said it’s not something he thinks about. “We’ll let things play out as they will moving forward,” he said. “For me, it’s just flattering that you would even ask that question and that I’m thought of in that context.”

The Fed could start removing stimulus next year

Bostic, who is a voting member on the Fed’s policy-setting committee this year, expressed optimism about the economic recovery from the pandemic, predicting “robust job growth.” But the labor market is still down nearly 10 million jobs as a result of the health crisis and Bostic said it will take “many months” to fully recovery, perhaps not until the end of next year or even into 2023.

The pandemic has worsened America’s inequality problem by wiping out four times as many low-income jobs than high-income ones. “The people who had the least are being hit the hardest,” Bostic said.

Bostic is hopeful the government can tackle inequality, but added: “There is no doubt, this is a daunting challenge.”

This may explain why the Atlanta Fed chief is in no rush for the central bank to get out of emergency mode. Bostic said he wants to see “a lot of progress” on the employment and inflation front before voting to remove the Fed’s extraordinary stimulus. Not only are interest rates still at zero, but the Fed is buying $120 billion of bonds each month through a program known as quantitative easing.

When might the Fed slow its bond purchases? Bostic said he’s “hopeful” tapering can begin in the next 12 to 18 months.

Some fear that rock-bottom rates, quantitative easing and unprecedented fiscal stimulus will overheat the economy, setting off debilitating inflation that short-circuits the recovery.

Bostic acknowledged that inflation readings will be volatile in the next few months as the economy recovers, and he stressed that the Fed won’t overreact to just a few months of sharply higher prices.

“If we see the trajectory of inflation moving far, far away from our 2% objective, then I think there’ll be time to act,” he said. “But again, we are far from that point right now.”

Yet Bostic conceded that no one knows what will happen with inflation, because this is a once-in-a-century pandemic.

Analysis: The breakaway European Super League is all about big money