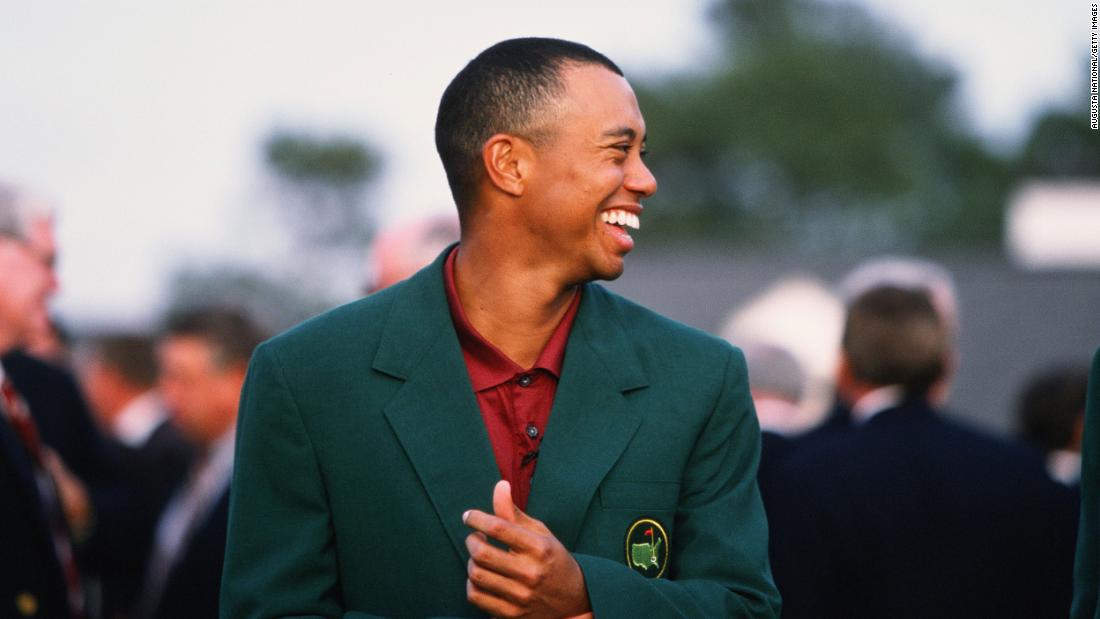 Using his hat to fight back tears, Woods began showing slight cracks in his usually stoic facade as his momentous achievement was sinking in.

Meanwhile, a relieved and ecstatic Earl and Kultida Woods were waiting to hug their son as he made his way off the iconic 18th green at Augusta National.

And so was born the “Tiger Slam.”

While not the more traditional “grand slam” in golf — holding all titles in the same calendar year — the “Tiger Slam” comprised winning the last three majors in 2000 and then the Masters in 2001.

At the time, Woods — a child prodigy and seemingly always destined to be a star — was playing at a level far above all of his competitors, and beyond being the most identifiable Black player in the golf world, he was arguably the most recognizable name in sport across the globe. According to Forbes, Woods has made $1.4 billion since turning pro in 1996.

Yet for the young man from California, none of that seemed to matter.

“It’s an eerie calmness. I’ve succeeded in what I wanted to accomplish,” he said in his 2001 Masters coronation ceremony.
The 1964 U.S. Open winner Ken Venturi was more emphatic in analyzing Woods’ achievement.

“I think it’s the greatest feat I’ve ever known in all of sports.”

READ: A Tiger’s trek: The life and times of golf’s biggest star

Blowing away the competition

In June 2000, Woods was already a two-time major winner.

In 1997, he became the youngest Masters champion for his debut major victory, finishing 12 strokes ahead of Tom Kite — the margin of victory is still the largest in the tournament’s history — before winning his second at the PGA Championship in 1999.

He seemed to be the most famous person on the planet and couldn’t go anywhere on the course without a throng of fans or photographers documenting his every move.

However, as a child star and under his father’s unrelenting guidance — in particular in relation to the racism he could face — Woods had learned how to put up walls to mitigate against the outside noise and pressure, according to Jeff Benedict, co-author of the biography on Woods, which formed the basis of last year’s HBO documentary.

“His father had truly been a victim of racism on a more intimate scale than Tiger,” Benedict told CNN Sport. “Earl Woods experienced racism at each step of his life. … And he was schooled by his father about racism. And for his dad, I think the racial implications of Tiger’s achievements were very important.

“All of [the media] was focusing on the racial angle of what Tiger was doing. When there’s that much saturation coverage, it’s impossible to ignore it, especially when you are the center of it.

“But I think part of what makes his achievement so otherworldly is that he did it in the midst of all of this other external pressure that none of the other golfers that he was competing against had to deal with.”

Not that you’d have noticed that Woods appeared to be under any undue pressure. He dominated from start to finish at the 2000 U.S. Open, securing a remarkable 15-stroke win, the largest margin of victory in a major championship in golf history.

Woods looked at ease at the notoriously-difficult Pebble Beach course as his performance sent out an ominous message to his rivals.

Mark Cannizzaro, sports columnist for the New York Post, describes Woods’ domination of the rest of the U.S. Open field as “absurd” and “unimaginable.”

“That was really one of those golf tournaments where it looked like everybody else in the field was playing a different golf course than Tiger was,” said Cannizzaro.

A month later at The Open Championship at St. Andrews, Scotland, Woods showed he really was playing at a different level to everyone else, winning by eight shots to claim back-to-back majors.

“There is a point where he has so much momentum and he’s almost like a steamroller with a club. It’s almost like you’re not really watching a competition between golfers,” Benedict remembers.

“You’re watching Tiger versus almost nature, because there isn’t anybody, in those particular tournaments, there wasn’t anybody else who was even in the same orbit he was in.”

With two majors in his pocket, Woods traveled to Valhalla Golf Club, Kentucky, for the 2000 PGA Championship with speculation intensifying as to whether one golfer could hold all four major titles at the same time and achieve the unthinkable.

After two tournaments where he’d faced little competition, Woods had a much sterner test at Valhalla from an unlikely source: PGA Tour player Bob May.

May, who had previously played in only four majors, stuck with Woods hole by hole across the four days. In fact, after the four rounds, May left Woods with a tricky, downhill putt to take it to a playoff.

However, reflecting on the tournament afterward, May said he “never once thought [Woods] was going to miss it.”

Woods indeed holed the putt to send the tournament into a three-hole playoff.

With the crowd celebrating his every move, it seemed like Woods’ victory was destined. And win he did, along the way giving us one of the most memorable moments of the “Tiger Slam,” running and pointing at a rolling ball before the putt actually entered the hole.

It was a victory that had Woods showing a different side to his game, which added another layer of impressiveness — if possible — to the “Tiger Slam” for Benedict.

“He demonstrated that whether he’s running away like that or whether he’s in a competition where there actually is another golfer who is neck and neck with him, which adds a tremendous amount of pressure and the stakes seem a lot higher and the margin of error becomes much smaller to be able to survive and win, he still does it.

“In my mind, there’s a lot more pressure on him than on the fellow golfer who’s challenging him because no one expects the challenger to actually beat him, whereas everybody is expecting Tiger to do this.”

With eight months between the PGA Championship and the Masters in April the following year, Woods had plenty of time to contemplate the possibility of holding all four majors at once.

Despite the pressure, Woods felt more at ease heading to the event in 2001, according to Cannizzaro.

After an opening day where he finished five shots off the lead, Woods gradually made his move up the leaderboard.

Despite a late charge from US golfer David Duval, Woods — adorned in his now famous red shirt and black trousers — was able to create history by winning his second Green Jacket and complete the “Tiger Slam.”

Whether you were watching on TV or listening to it on the radio, Woods rolling in that winning birdie putt on the 18th green at Augusta National was one of those “I remember where I was when I was watching” moments.

“I think everybody appreciated that they were watching something unprecedented, something that they may never see again — especially in the modern era, for someone to be that dominant, to string together that many championships in succession,” Benedict said.

“Tiger was the greatest golfer we’d ever seen.”

At the start of Benedict’s biography on Woods, he and co-author Armen Keteyian liken Woods to William Shakespeare, in the sense that the golfer is a “once in history” individual — one we most likely will never see again.

During that amazing 12-month stretch during which he was playing golf to a level we’ve not seen before, the pressure was, “an extra piece of luggage that the superstar hauls around that other people can’t see,” says Benedict, who adds that Woods developed his own mindset to cope and allow him to play his own game.

“When you get to be that exceptional, it’s hard for even your fellow competitors to quite appreciate and understand the mentality that those few bring to their sport,” Benedict explains.

“When you’re the greatest, and Tiger was the greatest who had ever played the game, he is at a place it’s impossible really for anyone else to fully appreciate the mental aspect of their approach to sport.”

As with LeBron James, Tom Brady or Michael Jordan, Woods’ desire to win never seemed to be sated and he was always “thinking about the next one,” according to Benedict.

He went on to win two majors in 2002 and nine more in total, including his memorable comeback victory at the Masters in 2019.

“How do you generate the drive to stay on the top of the mountain? After you’ve conquered the mountain and you own it, how do you get hungry enough to now want to beat down everybody who’s coming up to try to be the next one on the mountain?” Benedict asks.

Si Woo Kim breaks putter in frustration, forced to putt with wood at the Masters