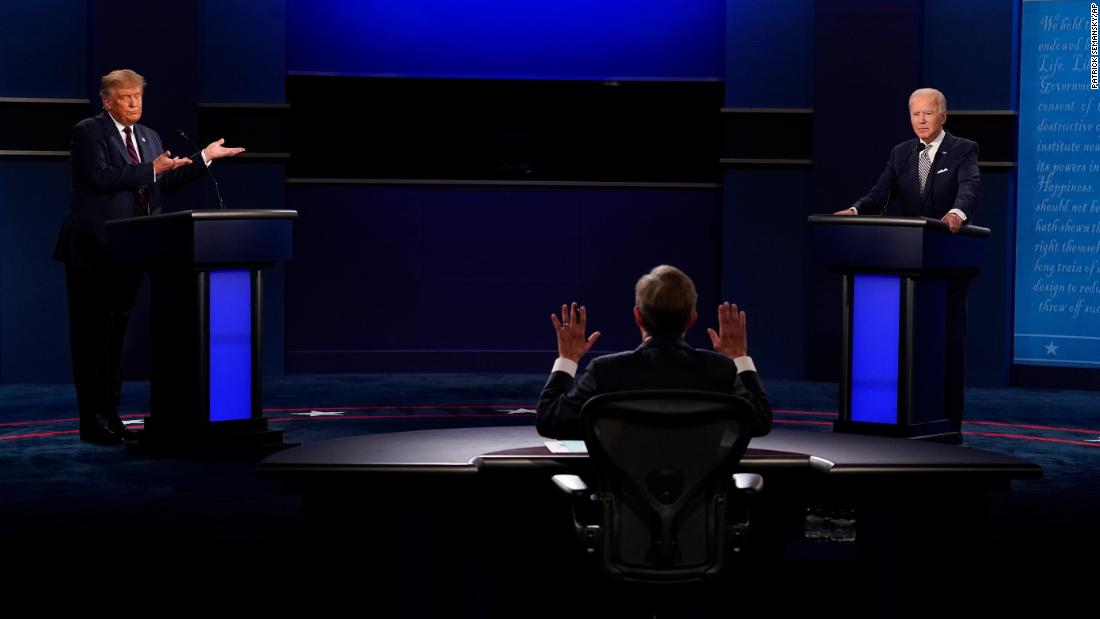 What’s happening: Stocks are lower following an acrimonious and chaotic debate between the two candidates, during which Trump repeatedly interrupted his opponent and failed to engage on questions of policy.

Investors have been particularly worried by Trump’s refusal in recent days to commit to conceding the election if he loses. That could lead to a long period of uncertainty after voters cast their ballots.

On Tuesday, Trump repeated baseless claims about the proliferation of fraud tied to mail-in voting, and declared he wouldn’t support a result under certain circumstances.

“If I see tens of thousands of ballots being manipulated, I can’t go along with that,” Trump said.

It’s the kind of comment that’s causing traders to rush to hedge some bets in case markets go haywire around the election.

“Market participants are concerned that Trump will not leave peacefully if he loses the election, bringing political risks to the fore,” Axi market analyst Milan Cutkovic said.

See here: Futures contracts tied to the VIX, a key measure of stock market volatility, are getting more expensive as investors brace for a rocky October, November and December.

“We’ve got a premium attached to the US election, it’s just knowing when to add the premium,” Jordan Rochester, a currency strategist at Nomura, told me. “Is it for the election date? A week after? A month after?” Traders aren’t sure — so they’ve been applying a premium across all of those dates, he said.

The fractious debate also undermined confidence that Congress can come together to agree on a new stimulus package to support businesses and workers this year.

“Despite recent progress, the chances of Democrats and Republicans reaching a deal on a new stimulus package ahead of the presidential election remain slim,” Cutkovic said.

A wave of fall job losses is crashing down

Economists warned that layoffs could jump again this fall as government support for businesses wanes and the pandemic continues to hit vulnerable firms.

Those predictions appear to be coming true, with top companies in industries most affected by the coronavirus announcing fresh job cuts this week.

The latest: Disney (DIS) is laying off 28,000 people in the United States as the pandemic hammers its parks and resorts business. Royal Dutch Shell (RDSA), meanwhile, said Wednesday that it will will slash as many as 9,000 jobs as it accelerates a shift away from fossil fuels.

The huge slump in demand for oil and gas caused by Covid-19 restrictions is pushing some of Europe’s biggest energy companies to speed up a shift to cleaner fuels. In June, Shell wrote down the value of its assets by as much as $22 billion and cut its oil price forecasts.

Tens of thousands of airline jobs are also at risk this week.

US airlines promised to keep on workers until October 1 when they accepted federal bailout funds earlier this year. That prohibition ends Thursday. Some carriers say they’ll hold off on layoffs, at least temporarily, while they see if Congress can come together to pass a new stimulus package, but others could start cutting jobs immediately.

The collapse in air travel caused by the pandemic could wipe out up to 46 million jobs worldwide, according to a new report from the Air Transport Action Group.

What to watch: Palantir and Asana’s trading debuts

Shares of Palantir, the secretive data analysis company, and Asana, which makes workplace software, are due to start trading on the New York Stock Exchange Wednesday. But the process may not be effortless.

That’s because both firms are directly listing their shares, an unconventional method that’s only been utilized by two other major companies. Spotify and Slack went the direct-listing route in 2018 and 2019, respectively.

“It wouldn’t surprise me if these [listings] don’t go that smoothly,” said Phil Haslett, co-founder of EquityZen, a company that lets investors buy pre-IPO shares of private companies. With a scant track record of direct listings, having two on the same day could be logistically tricky, Haslett told me.

The appeal: Going public via direct listing tends to be quicker and involves less scrutiny, since firms are just selling existing shares. It also allows longtime investors to cash out without a flood of new shares diluting the value of their holdings.

Should Palantir and Asana pull off direct listings successfully, it could shake up the IPO market, encouraging more companies to follow suit.

Once shares list, investors will also closely watch how they perform in early trading. Asana, in particular, could benefit from huge enthusiasm for software companies as the pandemic drags on.

“The multiple that investors are willing to pay on software revenue is growing a lot faster than anything we’ve seen before,” Haslett said.

The frenzy, he said, is “unsustainable” long-term. But for now, it appears to be working for companies that fit the mold.

Palantir and Asana are scheduled to starting trading on the New York Stock Exchange. More below.

Also today: The ADP private employment report for September posts at 8:15 a.m. ET, a teaser ahead of the official US jobs report from the Department of Labor on Friday.

Coming tomorrow: US economic data on personal income and spending, manufacturing and jobless claims will give investors plenty to sort through.

Investors are betting on a Macy’s revival. Should they be?

Investors are betting on a Macy’s revival. Should they be?

A spike in prices could change everything for Wall Street