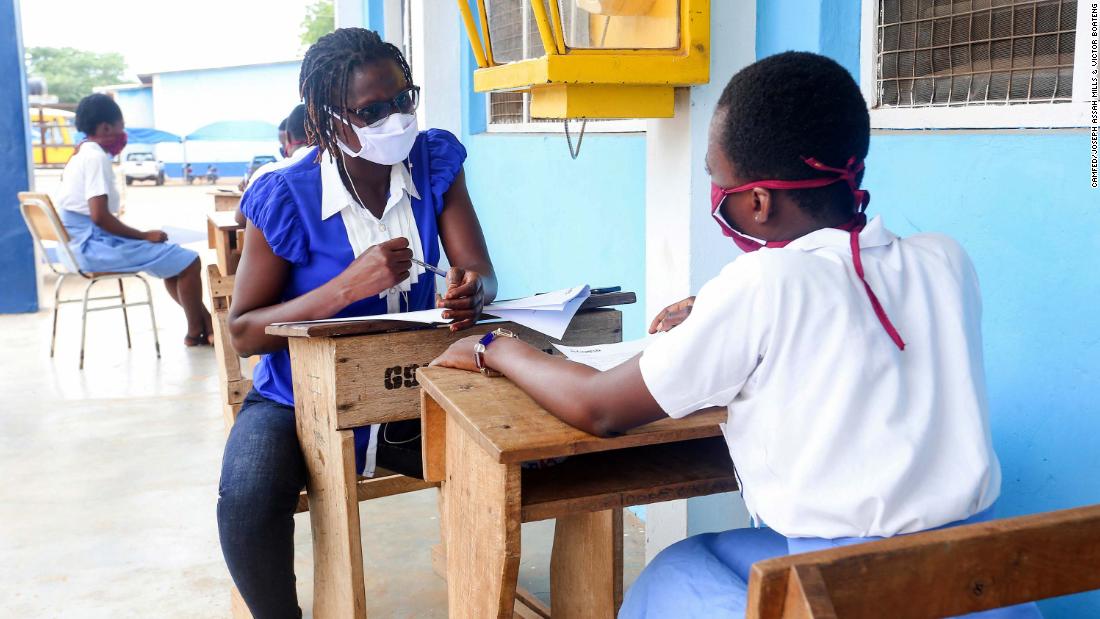 “My story is proof of what education does in rural communities, especially for young women,” she told CNN.

Learning tried to move online, but inadequate access to internet, computers or electricity meant challenges for children who found themselves with an even less hospitable avenue to education than Mavhinga did in her youth.

While educational organizations developed inventive stopgap solutions, the pandemic highlighted that the future of education lies with a more digitized approach to learning.

This means that without long term action, the most marginalized, especially those in remote rural areas without devices or connectivity, will be at a disadvantage, Mavhinga told CNN.

Learning through WhatsApp, radio and TV

Mavhinga is now an executive adviser to Camfed (Campaign for Female Education), the international nonprofit which awarded her the bursary to study law.

The organization’s mission is to eradicate poverty in Africa through the education of girls and the empowerment of young women. Through financial and motivational support, Camfed helps girls transition from primary to secondary schools across 6,853 government partner schools in Ghana, Malawi, Tanzania, Zambia and Zimbabwe.

The nonprofit helped ensure learning continued during the pandemic in some of these countries through innovative remote learning methods like radio and television programs, offline data sharing apps and WhatsApp.

It worked with a core team of young women who have access to the internet, who downloaded and shared available educational content with the learners through offline data sharing apps.

These “learner guides” can gain access to interest free loans to grow their own businesses, as long as they are paying ‘social interest’ as role models and mentors.

“I keep in touch with my students, I call them and make sure that they study well, and whenever they have a question, they ask me and I make sure to explain to them when I can,” said Saitama Hamidu, a learner guide in Tanzania. “When I cannot, I make sure to direct them to the ways that they can get the answers right.”

In Zambia and Tanzania, Camfed reaches nearly 80,000 students through radio programs. Frontline workers are sometimes invited on to talk about the virus, with the broadcast broken down into local dialects so everyone gets a clear understanding.

These sessions are also replicated on WhatsApp, where students can ask questions and interact with the teacher.

“These innovative measures can potentially be implemented to ensure even the most marginalized learners have access to learning despite the pandemic, and that they don’t lose hope for the future,” Patience Mkandawire, a member of Camfed, told CNN.

UK charity organization Voluntary Service Overseas works with radio stations in Rwanda to provide educational content. Its team calls parents to make sure their can children listen to the radio program and that they had support during the airing time.

Ajayi Basirat, a Lagos-based teacher, created a small WhatsApp group in March called Mathematics Clinic, which targeted final year students at a comprehensive college. By the end of April, the class group exceeded the WhatsApp user limit for a single group and she moved to Instagram, where her student population has grown to nearly 2,000.

To ensure disadvantaged students did not drop out of the classes, she began to record her teaching sessions as short videos, compressing them for low data usage and uploading them on Telegram, Twitter, Instagram and YouTube.

“It hurts to see the students missing classes as a result of not having data,” Basirat told CNN. Her videos have now reached students in different parts of the world, including India, South Africa and Canada.

“I was shocked when I received a card from her one day, when I told her I didn’t have data to take our classes that period. It was so unusual and I had to ask her a lot of times if this was genuinely meant for me. I know she could go to any length to assist her students,” Margret Alada, one of Basirat’s pupils, told CNN.

Leaving school means the start of a vicious cycle, and education is key to social development, according to numerous international NGOs.

This is especially so for women because there is a high chance that they will marry early and not be able to meet the health and economic needs of their children, according to the World Bank.

Mavhinga and others at Camfed were able to break this cycle using education.

This has not been lost on the international community and Camfed has received funding from notable benefactors for their work.

Of the nearly $1.7 billion that Mackenzie Bezos, the billionaire philanthropist and ex-wife of the world’s wealthiest man Jeff Bezos, recently donated to charitable organizations, $25 million went to Camfed.

To celebrate their birthdays, the Duke and Duchess of Sussex, Meghan Markle and Prince Harry, donated $130,000 to the nonprofit.
In September, Lucy Lake, CEO of Camfed, and another executive director, were awarded the $3.9 million Yidan Prize by a foundation set up by one of the co-founders of Chinese internet giant Tencent, (TCEHY) Charles Chen Yidan, said Camfed.

The need for digital transformation

Globally, almost 10 million children may never return to school due to funding cuts and poverty caused by the pandemic, the international NGO Save the Children has warned. This is adding to the 258 million already out of school before the outbreak.

In March, Africa Teen Geeks (ATG), a computer science nonprofit organization, launched the STEM Digital Lockdown School in partnership with South Africa’s Department of Basic Education. Of the 12 million learners in the country’s basic education system, only 500,000 signed up for ATG’s Zoom classes.

The low uptake was due to the cost of data and a lack of devices, Lindiwe Matlali, founder and CEO of ATG, told CNN.

“Even the kids who were able to access our classes used mostly their parents’ cellphones and tablets because we found that most parents used computers for work,” said Matlali, who was recognized by Queen Elizabeth II as a “Point of Light,” an honor bestowed on volunteers from Commonwealth countries for the differences they are making in their communities and beyond.

Teachers also need to receive more comprehensive technology training, said Matlali, but the challenge is a lack of opportunity, rather than ability.

“We found that it was easy for the teachers to pivot to online. 99% of our teachers taught online for the first time after receiving literally four hours of training,” she added.

Ben Pudyane, a teacher from Limpopo province in South Africa, taught his classes under a tree using his cellphone because he did not own a laptop and internet connectivity was better there than in his home.

US tech giant Microsoft works with about 34 educational authorities across the region to support Africans with the development of skills that benefit their community, country and the continent at large.

“It’s crucial to drive that low cost connectivity across Africa,” said Angela Nganga, Microsoft’s African and Middle East education industry lead. “We must also have a device that is affordable and ideal for education.”

The Future of sub-Saharan education

Governments in sub-Saharan Africa and across the world are prioritizing other social and economic challenges, Nganga told CNN. Since the outbreak of Covid-19, $11.8 trillion has been spent on stimulus packages as fiscal response to save lives and mitigate economic shocks, according to UNESCO. Of this, only $91 billion, or less than 1%, was allocated to education.

But there are encouraging signs that the pandemic has made officials wake up and that telecommunications companies are becoming more helpful.

Earlier this year, Basirat said she received a call from education authorities in Lagos state, who praised her work, interviewed her and shot a documentary about her teaching techniques. A month later, in June, the government began distributing cellphones to students from low income families so they could benefit from e-learning programs, according to information on the government’s official website.

In April, authorities in Oyo State, southwestern Nigeria, announced the offer of 500MB of free data to students participating in the state’s e-learning programs. Other states, education authorities claim, have adopted similar ideas, engaging students via radio, television, WhatsApp and other channels.

Morocco and Tunisia were able to move quickly into blended learning during their lockdowns purely because they’ve made multi-year investments in these areas, said Nganga.

Meanwhile, Microsoft has partnered with MTN in South Africa and Vodacom across others to come up with affordable packages to address connectivity issues.

Spotify Launches Into 85 New Markets in ‘Next Few Days’

Nigeria crashed aircraft was on rescue mission for kidnapped schoolchildren