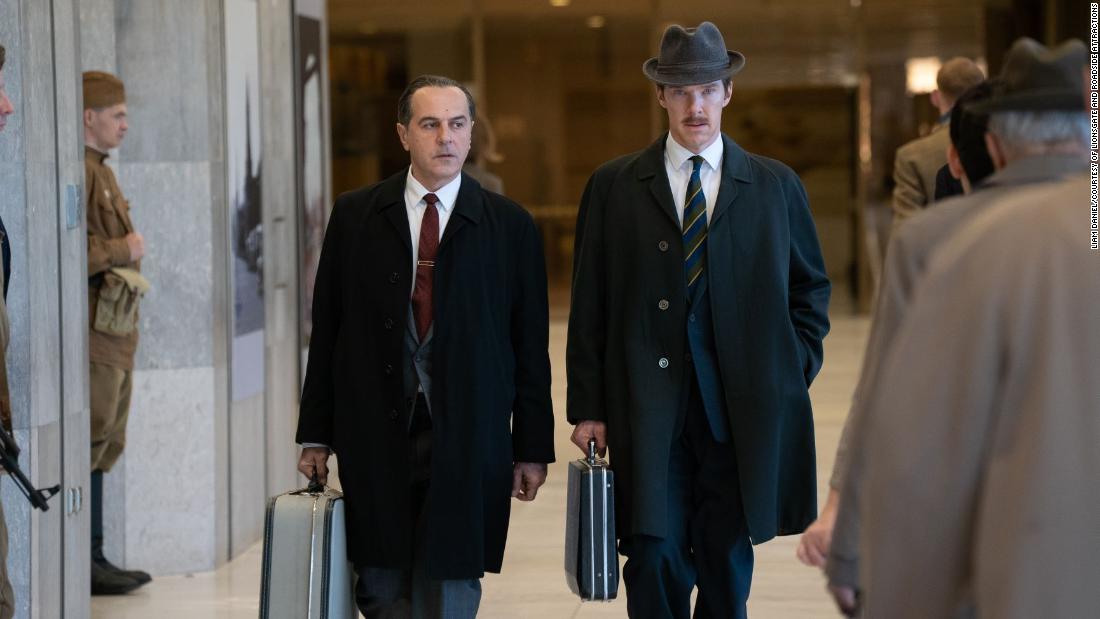 British and American espionage officials were understandably eager to gather information from Oleg Penkovsky (Georgian-born Merab Ninidze, also terrific), a high-ranking Soviet official who has grown increasingly alarmed by leader Nikita Khrushchev’s willingness to seek confrontation with the West. But they need a way to gain access to what Penkovsky knows, using someone “who the KGB won’t suspect” in order to collect his secrets.

They wind up approaching Cumberbatch’s Greville Wynne, a rather staid family man who periodically travels to Moscow on business. “I’m just a salesman,” Wynne protests, and he appears to be genuinely concerned and apprehensive, before finally agreeing.

What follows, as directed by theater director Dominic Cooke from a script by Tom O’Connor, is a fair amount of cloak-and-dagger gamesmanship, with Penkovsky trying to reassure Wynne by telling him of the prying eyes on both of them, “I’m better at this than they are.”

Wynne, meanwhile, must keep the whole operation secret from his wife (Jessie Buckley), who becomes suspicious of his behavior, which includes more interest in physical fitness — and energy in the bedroom — than he previously possessed.

Cumberbatch is very good at portraying Wynne as an ordinary bloke thrown into extraordinary circumstances, whose MI-6 and CIA handlers (the latter played by “The Marvelous Mrs. Maisel’s” Rachel Brosnahan) are concerned about his welfare but still willing to endanger him thanks to the valuable information that Penkovsky is feeding them.

The movie’s heart, however, resides in the bond forged between the two central characters, whose loyalty to and compassion toward each other eclipses international boundaries and tensions, unfolding prior to the Cuban Missile Crisis as a sobering reminder of the stakes involved.

Cumberbatch has excelled in a number of different espionage-type projects, including “The Imitation Game” and a version of John Le Carre’s “Tinker Tailor Soldier Spy” a decade ago. He brings a whole lot of understated star power to a movie that otherwise benefits from how tightly constructed it is, without a lot of fat on its bones or embroidery around its edges.

On that level, and others, “The Courier” more than delivers.

With award ratings in freefall, Oscar organizers hope for the best in a lost year

Kate Winslet’s daughter slipped ‘under the radar’ as an actress

Top Stories The News Article - April 21, 2021 0
Putin said "maximum coverage" of the population by inoculation was now a priority for the country. "It is the only way to stop...

Education The News Article - April 21, 2021 0
SRINAGAR: National Institute of Technology (NIT) Srinagar on Wednesday ordered starting of online classes and closure of hostels within one week to ensure...