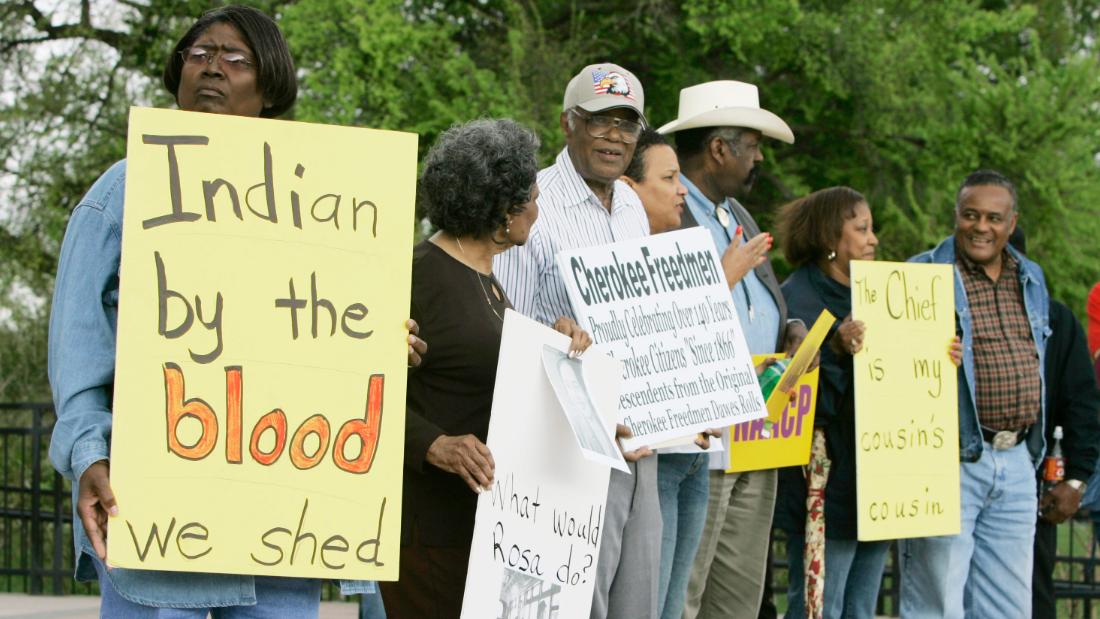 The Cherokee Nation Supreme Court ruled on Monday that the tribal nation remove the phrase “by blood” from its constitution and other tribal laws. That change formally acknowledges that the descendants of Black people once enslaved by the tribe — known as the Cherokee Freedmen — have the right to tribal citizenship, which means they are eligible to run for tribal office and access resources such as tribal health care.
The recent decision by the Cherokee Nation Supreme Court is a response to a 2017 ruling by a US federal district court, which determined that the descendants of the Cherokee Freedmen are entitled to full tribal citizenship rights under a treaty the Cherokee Nation made with the US in 1866.

“Freedmen rights are inherent,” Cherokee Nation Supreme Court Justice Shawna S. Baker wrote in the opinion. “They extend to descendents of Freedmen as a birthright springing from their ancestors’ oppression and displacement as people of color recorded and memorialized in Article 9 of the 1866 Treaty.”

The history of the Cherokee Freedmen is an example of just how complex and layered issues of race, inequality and marginalization are in the US.

Many Native Americans were enslaved alongside African Americans during the colonial period — Brown University historian Linford D. Fisher estimates that 2 million to 5.5 million Native people were enslaved from the time of Christopher Columbus to around 1880.
But some wealthier tribal citizens, particularly in tribes in the Southeast that had adopted certain norms of White settlers, also practiced slavery themselves. That includes the Cherokee people, some of whom in the early 1800s had started to enslave African Americans.
Then in the late 1830s, the US government forcibly expelled the Cherokee from their homeland and ordered them to relocate to present-day Oklahoma — an exodus known as the Trail of Tears. What’s not as widely known, though, is that enslaved African Americans made the journey along with the Cherokee citizens who enslaved them.
About 4,000 enslaved Black people were living among the Cherokee people by 1861, according to the National Museum of the American Indian.
The tribe abolished slavery in 1863. And shortly after the Civil War ended, the Cherokee Nation signed a treaty with the US government that granted full citizenship rights to those formerly enslaved by Cherokee citizens.
But in practice, Freedmen were often denied those rights and excluded from the tribe, wrote Lolita Buckner Inniss in a 2015 article published in the Columbia Journal of Race and Law. Over the past several decades, Cherokee Freedmen have fought to protect those rights through various legal proceedings.

Freedmen have long been fighting to protect their rights

In 2007, the Cherokee Nation amended its constitution to restrict tribal citizenship to those with “Indian blood.” That expelled about 2,800 descendants of Cherokee Freedmen from the tribe, the website for the National Museum of the American Indian states.

Chad Smith, the Principal Chief of the Cherokee Nation at the time, argued that the tribe was a sovereign nation and should therefore have the right to determine who qualifies for tribal citizenship. But the Freedmen pushed back, resulting in a series of legal battles between both parties over the next decade.

In 2017, a federal district court ruled in favor of the Freedmen — a decision that the Cherokee Nation Supreme Court has now reaffirmed.

“The ‘by blood’ language found within the Cherokee Nation Constitution, and any laws which flow from that language, is illegal, obsolete, and repugnant to the ideal of liberty,” Baker wrote in the recent opinion. “These words insult and degrade the descendants of the Freedman much like the Jim Crow laws found lingering on the books in Southern states some fifty-seven years after the passage of the 1964 Civil Rights Act.”

“Cherokee Nation is stronger when we move forward as citizens together and on an equal basis under the law,” he said in a statement on Monday. “…The court has acknowledged, in the strongest terms, our ancestors’ commitment to equality 155 years ago in the Treaty of 1866. My hope is that we all share in that same commitment going forward.”

About 8,500 descendants of Freedmen are currently enrolled as citizens of the Cherokee Nation, according to a news release from the tribe.