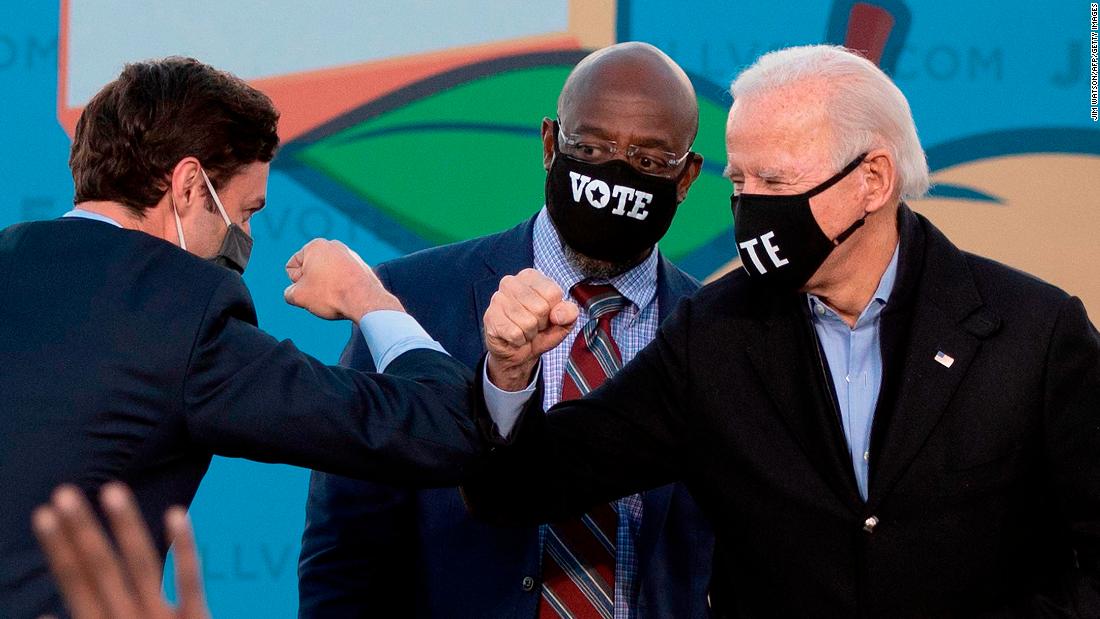 Wall Street, however, is acting like an Ossoff win is likely, as investors scramble to readjust their portfolios. Nasdaq futures were last down 2.2%, while the yield on benchmark 10-year US Treasuries jumped above 1% for the first time since March.

Since November, investors have been betting that government in Washington would remain divided, restraining more ambitious Democratic policy efforts that could hit corporate earnings and the stock market.

But with Democrats closing in on 50 seats in the Senate, that calculus is changing.

Concerns about a crackdown on the tech sector are front and center. Facebook’s stock is off 3% in premarket trading, while shares in Amazon, Apple and Google parent Alphabet are all down more than 2%.

The extent of the risk, however, remains up for debate. Alec Phillips, chief US political economist at Goldman Sachs, pointed out Wednesday that 60 votes will still be needed for most Senate legislation. Bipartisan support “would still be necessary to pass legislation on issues like infrastructure, a minimum wage increase, tech regulation and environmental policies,” he said.

“While change is in the air for the US, changes in US legislation may not be very radical,” Berenberg chief economist Holger Schmieding told clients, noting that more progressive bills may fall flat with moderate Democrats.

Plus, a “blue wave” is expected to unleash another round of stimulus spending to support the economy during the pandemic — a big positive for markets. Phillips said Goldman Sachs has penciled in another $600 billion package “in the near-term” under this scenario.

The latest: The kingdom said Tuesday that it will reduce output by 1 million barrels per day from January’s levels.

“We do that willingly and we do that with the purpose of supporting our economy, the economies of our colleagues,” Saudi Minister of Energy Prince Abdulaziz Bin Salman said during a press conference.

Broadly, the Organization of the Petroleum Exporting Countries and allied producers have agreed to hold production steady in February and March, my CNN Business colleagues Charles Riley and Chris Liakos report. While Russia and Kazakhstan will produce more oil over the coming months under a deal reached this week, the impact may be offset by Saudi Arabia’s pullback.

The news has sent Brent crude futures, the global benchmark, to $54.24 per barrel. Prices haven’t been that high since last February. US oil is trading at $50.24 per barrel.

Beyond the headlines, however, analysts are concerned that disagreement among oil producers is growing as the pandemic drags on. While some countries — like Saudi Arabia — are worried that new lockdowns and economic uncertainty could weigh on demand, others, like Russia, are eager to get pumping again.

“The division is a blow to the alliance, raising again the question of whether or not its members, with very different agendas and production structure, can continue to work together,” Dickson said.

The last time the group splintered, back in March, a brief but intense battle for market share ensued between Saudi Arabia and Russia, sending oil prices crashing.

President Donald Trump keeps piling pressure on Chinese tech companies in the closing days of his administration — though it’s not clear his latest actions will have real bite.

An order banning WeChat downloads in the United States was temporarily blocked by a federal judge, and multiple courts have issued temporary injunctions against the administration’s attempts to ban the short-form video app TikTok.

The new order is also set to take effect in 45 days. That’s after Trump leaves office.

“The Trump administration is still rushing through its list of penalties to restrict the US-China relationship in hope of inducing China into retaliating, further worsening ties, and tying [President-elect Joe] Biden’s hands,” said Scott Kennedy, senior adviser at the Center for Strategic and International Studies in Washington. While the restrictions on these apps are meant to be “highly disruptive,” it remains to be seen whether they will actually be implemented, he added.

Coming tomorrow: Initial claims for unemployment benefits are forecast to rise to 800,000.

Stocks are falling. But it’s not all bad news

That didn’t take long. Manic markets are back again

When Alia Bhatt spoke about her boyfriend Ranbir Kapoor

Entertainment The News Article - March 1, 2021 0
​When Alia acknowledged her love publiclyThe duo made it official at the 64th Vimal Elaichi Filmfare Awards 2019. In her acceptance speech, Alia...

Biden vowed to hold MBS accountable. Now he’s being accused of letting him get...