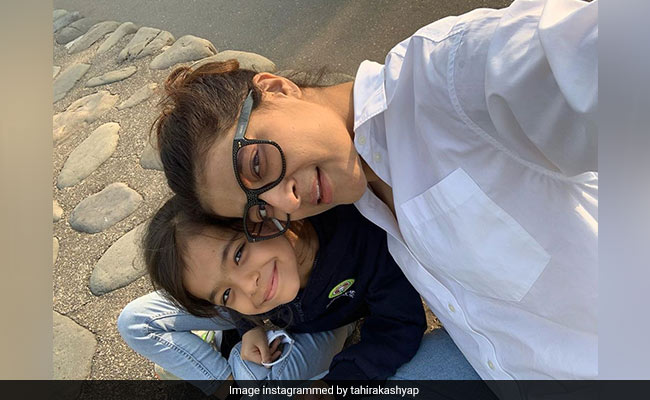 Tahira Kashyap with a pocket full of sunshine and the best company, is enjoying her time in her hometown Chandigarh (going by her Instagram posts). The author shared a set of adorable photographs along with her daughter Varushka Khurrana. She described the mother-daughter moments with the best set of words in her caption and she wrote: “Basking the winter sun, sharing the headphones, listening to each other’s music list and then clicking one another.” Tahira accompanied the post with the hashtags #nofilter, #chandigarhwinter, #lake, #bliss and #daughters. Check out Tahira’s post here:

In a separate Instagram entry, Tahira Kashyap wrote: “There is magic between us (unkempt hair is the best childhood).” Take a look at the post here:

On Daughter’s Day this year, Tahira posted a note for Varushka that read, “I celebrate you every day! ‘Perhaps she wants to change the world. Perhaps it’s a world that needs changing’ – Enola Holmes.”

Tahira is married to actor Bollywood actor Ayushmann Khurrana. The couple are parents to a son named Virajveer and daughter named Varushka. The actor was last seen in Shoojit Sircar’s Gulabo Sitabo with Amitabh Bachchan which released on OTT platform Amazon Prime Video.

Tahira Kashyap has written four books. Her latest book is called The 12 Commandments Of Being A Woman. Tahira wrote her first book I Promise in 2011, followed by her next novel Souled Out. She also co-authored husband Ayushmann Khurrana’s biography Cracking The Code: My Journey In Bollywood. She has also has directed short films like Pinni and Toffee. The latter was screened at the 30th Cinekid International Film Festival, Amsterdam and at the 14th Bahamas International Film Festival.

Exclusive interview! Tahira Kashyap: I would love to adapt my books into films – Times of India

On Tahira Kashyap’s Birthday, Ayushmann Khurrana Shared This Pic While She Was Still Sleeping