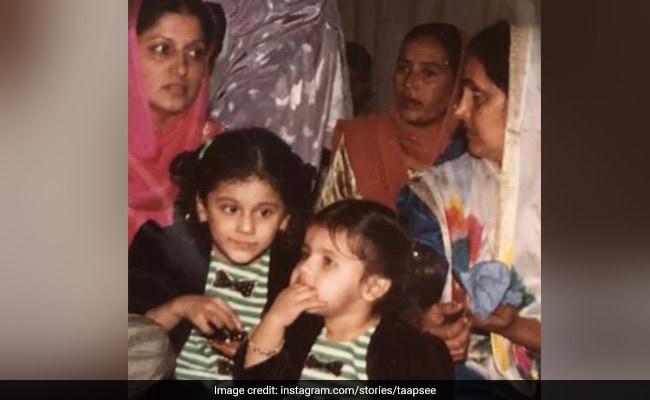 Taapsee Pannu, in a throwback state of mind, posted a super cute picture of herself with her sister Shagun Pannu on her Instagram story on Monday night. The photograph happens to be from Taapsee and Shagun’s childhood days. In the picture, little Taapsee can be seen admiring her sister and she looks cute as a button and her expression is just priceless. Taapsee, tagging Shagun Pannu in the picture, captioned it, “Me: Muh se ungliyaan nikal le kabhi toh.” Shagun Pannu frequently appears on her sister Taapsee’s Instagram profile. A few months ago, they went on a holiday to Maldives along with cousin Evania Pannu.

Take a look at the picture here:

Here are some of Taapsee’s posts with Shagun Pannu:

Taapsee Pannu’s fans will get to see a lot more of her as she has a busy schedule ahead, with back-to-back projects lined-up. The actress’ forthcoming projects include Vinil Mathew’s Haseen Dillruba (also starring Vikrant Massey), Aakash Bhatia’s Looop Lapeta and Shabaash Mithu. Looop Lapeta, which will also feature Tahir Raj Bhasin, is the Hindi adaptation of the 1998 German hit Run Lola Run while Shabaash Mithu is based on the life of Indian women’s cricket team captain Mithali Raj. The actress will also be seen in the film Rashmi Rocket., in which she plays the role of an athlete.

Last year too, Taapsee Pannu made many onscreen appearances. She starred in Game Over, Badla, Saand Ki Aankh and Mission Mangal. The actress is best-known for her performances in critically acclaimed as well as hit films like Pink, Naam Shabana, Soorma, Mulk and Manmarziyaan, to name a few. Her last project was Anubhav Sinha’s 2020 film Thappad.

Taapsee Pannu, Richa Chadha take a dig at Haryana minister for his comment on farmers’ death – Times of India

Dia Mirza to tie the knot with Mumbai-based businessman Vaibhav Rekhi on February 15? – Times of India