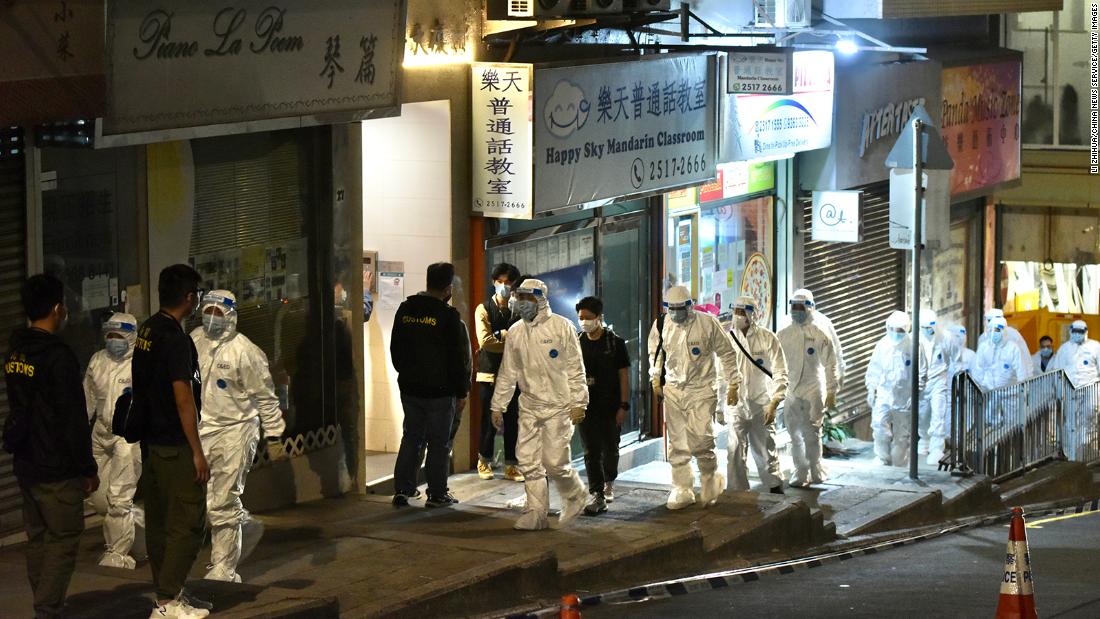 Ariel stepped inside the room and looked at her eldest.

“We both started crying,” she said.

Ariel’s family found themselves caught in the crosshairs of Hong Kong’s inflexible but efficient pandemic prevention measures in late February. Though it’s been more than 14 months since the territory identified its first coronavirus case, Hong Kong has shown few signs of easing numerous restrictions.

Nearly all residents arriving in the city must spend 21 days in hotel quarantine at their own expense. Restaurants shut at 10 p.m. and beaches are closed. Public gatherings are limited to four people.

The territory’s track and trace program remains among the world’s strictest. Anyone testing positive for the virus is required to go to the hospital, while their close contacts must enter government-run quarantine facilities for up to 14 days. The government frequently conducts “ambush-style” lockdowns, forcing entire apartment buildings or blocks to undergo Covid-19 testing.

That approach makes Hong Kong somewhat unique. While many governments are relaxing restrictions as vaccination rates increase, Hong Kong instead appears to be doubling down on its proven methods as it ramps up its own vaccine drive.

From a public health standpoint, there’s little arguing with the results. This city of more than 7 million people has only identified about 11,300 cases and 200 deaths, according to government figures. And there have been zero hard lockdowns.

But the lack of flexibility has, in several cases, left parents like Ariel with a heart-wrenching decision: go to quarantine and send their children to the hospital alone, or accompany them to the hospital and risk infection themselves.

Ariel joined her boys about a day after their admission after spending hours on the phone trying to navigate the bureaucracy of a major health care system and allay the fears of her crying son.

The scene she arrived upon was not what she or her husband had expected when her children were admitted to the hospital as asymptomatic cases a day earlier. Ariel said they were told their children would be “well taken care of by the pediatric nurses and doctors there,” not bound to their beds.

The restraints and diapers, the nurse told Ariel, were standard practice because hospitals do not have the labor pool to care for every child with Covid-19 and want to limit the risk to staff.

“I understand the protocol,” Ariel said, “But as a parent, this is not acceptable.”

Ariel is a pseudonym CNN agreed to use to protect her family’s privacy. She was hesitant to share her story because of the personal nature of family health care decisions, and said she did not want to sound like she was blaming anyone. She agreed to speak on the matter so other parents could learn from her situation — and insist they not be separated from young children.

Covid-19 cases in Hong Kong have been on the rise since an outbreak tied to a high-end gym in the Sai Ying Pun neighborhood last week.

The cluster has struck affluent areas of the city, with bankers and teachers among the scores who have been sent to quarantine camps across the territory. Many are housed in rooms as small as 18 square meters (200 square feet) until they are discharged, including families with small children.

They are given meals and allowed deliveries under certain conditions, but several say they may not leave the room. Running afoul of these policies can result in massive fines for people and businesses — or even jail time.

There have been dozens more since the gym cluster emerged. However, it’s unclear if the uptick is because more expatriates — a segment of the population that may be more likely to complain and speak to foreign media — are being forced to endure them.

Multiple new mothers who have tested positive or were in close contact with positive cases say they have been pressured to comply with government policy to either quarantine or isolate away from their breastfeeding infants, irrespective of their children’s ages. The World Health Organization recommends breastfeeding mothers and infants should remain together if the mother tests positive for Covid-19.

Carrie Lam, the city’s leader, said Tuesday the government has “no policy to deliberately separate children from their parents.”

“But public health concerns have to be respected, because it is good for the community at large,” she said.

Hong Kong’s Department of Health did not confirm any of these incidents. In an email to CNN, it said family members living with positive Covid-19 patients “will be treated as close contacts and they need to undergo quarantine in quarantine center.”

“For Covid-19 cases involving children, the public hospital will, under special circumstances, decide whether or not their parents can stay with the children in hospital,” it added.

After numerous cases of separations were reported this week, the government on Tuesday sent out a lengthy statement clarifying its policies on quarantine and isolation arrangement for families involving young children.

“Hong Kong has comprehensive and robust measures to combat Covid-19, which include quarantine and isolation where necessary, and these measures achieve to stabilize the recent wave of epidemic in safeguarding the well-being of our community as a whole. Yet, we also wish to emphasize that for cases where children are involved, each and every decision has been made in the interests of the children and their families,” the statement read.

Many in Hong Kong’s expatriate community have voiced concerns over the measures. A survey by the American Chamber of Commerce of 239 members found that most “were worried or somewhat worried about entire school classes being sent to government quarantine facilities, and that the policy is unjustified when it comes to the health of children.”

More than half said if such actions became routine, it would “factor into their decision about remaining in Hong Kong.”

Though the quarantine strategy has been criticized as overzealous and inhumane — especially for those stuck in small spaces for weeks without fresh air — many also appreciate how effective the government has been when it comes to keeping the general public safe.

After a slower than expected uptake in vaccine rollout, authorities announced Monday anyone over the age of 30 — some 80% of the population — could apply for vaccinations.

Analysis: Another national lockdown is not realistic for India

Anushka Sharma shares a helpline number for expectant mothers who are in need of...

Entertainment The News Article - May 18, 2021 0
Anushka Sharma, who is quite active on social media, has shared a helpline number to help expectant mothers who need medical help during...