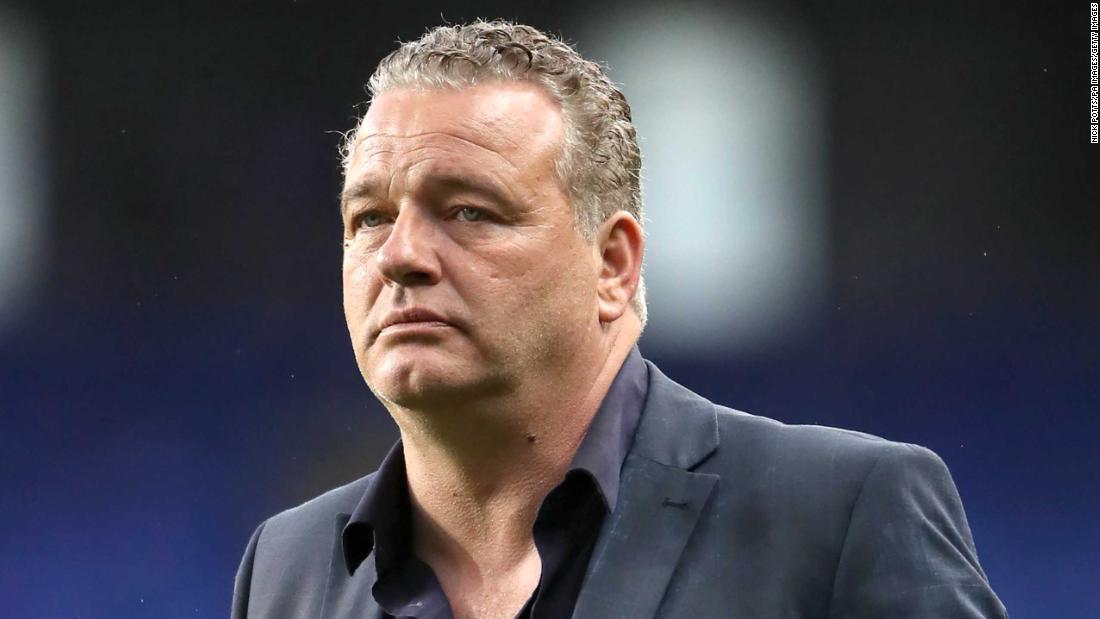 It’s a career to be proud of, but Stewart’s memories are often consumed by the horrific daily cruelty he says he suffered between the ages of 11 and 15 as a youth footballer.

This week, Stewart says he’d hoped to find solace in the independent review from prominent lawyer Clive Sheldon, commissioned by the Football Association (FA), into the scandal.

Instead, he says survivors of this sexual abuse have suffered “another kick in the teeth” following the release of a report detailing the “significant institutional failings” from English football’s authorities.

Stewart told CNN that the findings have left victims angry and disappointed when they had sought closure and vindication after decades of life impacted by the painful memories of abuse.

“This was commissioned by the FA, it was paid for by the FA and we’re going to be disappointed, aren’t we?” Stewart told CNN Sport’s Don Riddell. “They’re not going to completely hold their hands up and be liable for what happened.”

In the review by Sheldon, which was commissioned by the FA in 2016 after several former footballers came forward to discuss their experiences of sex abuse in the game, it was noted that the FA showed “significant institutional failings” in delaying the introduction of “appropriate and sufficient child protection measures” between October 1995 and May 2000.

But having spoken to many of the other survivors since the review was published, Stewart says that they reject this conclusion.

“Prior to ’95, there is no blame on any of the clubs, on any of the establishment because they said that nobody spoke out,” he says.

Stewart says the abuse he suffered as a child — “very, very early on … for a sustained four-year period” — has darkened how he views his outstanding achievements.

“I was so good at putting an act on, looking like I was this successful footballer, but inside I was an empty soul. I was dying and behind closed doors, I was struggling, really, really struggling.”

Contacted by CNN for comment on Stewart and others being disappointed by the report, the FA referred back to its statement released earlier this week.

In the statement, Mark Bullingham, chief executive of the FA, said the release of the review was a “dark day for the beautiful game” in which “we must acknowledge the mistakes of the past and ensure that we do everything possible to prevent them being repeated.”

Bullingham added: “I’ve had the privilege of meeting some survivors, whose courage is inspirational and whose stories are incredibly moving. They will never forget what has happened to them, and this report will now ensure the game will never forget either.

“So, today I address the survivors directly, as the people that matter most. To them I say: You have the deepest admiration of the FA. Your bravery throughout this process has been incredible. Your voices have been so powerful.

“I’d like to start by giving a heartfelt apology on behalf of the Football Association and the English game to all survivors, that this happened to you within football. No child should ever have experienced the abuse you did.”

When former Crewe Alexandra player Andy Woodward revealed in 2016 that he had been subjected to horrific abuse as a child at the hands of paedophile and football scout Barry Bennell, it compelled Stewart to speak about his own experience.

“I knew that having played for some of the biggest clubs in the UK and playing for my country, I knew that the story would then really gain momentum,” says Stewart.

In regard to the solidarity victims have felt, Stewart says: “I didn’t expect the tsunami of individuals that came forward. I don’t know why I didn’t expect it. But, you know, I was as shocked as everyone when it actually went nationwide and global.

“There were so many young footballers who had suffered the same as I did, and their dream was the same, to be a footballer.”

The accounts of Woodward and Stewart, among others, led the National Society for the Prevention of Cruelty to Children and the FA to set up a hotline for footballers who had experienced sexual abuse. According to The Guardian, it received over 800 calls in the first week.

Before the end of the year, the FA had commissioned the Independent Review into Child Sexual Abuse in Football 1970-2005.

After four years of waiting — further delayed by increased allegations against Woodward’s abuser Bennell, who was jailed in 2018 for 31 years at Liverpool Crown Court for 50 counts of child sexual abuse — the 710-page report was released this week.

“In my judgment,” Sheldon said in the review, “from October 1995 to May 2000, the FA acted far too slowly to introduce appropriate and sufficient child protection measures, and to ensure that safeguarding was taken seriously by those involved in the game. These are significant failings for which there is no excuse.”

The review found that there were at least 240 suspects and 692 survivors of sexual abuse within football as of August 2020.

In Stewart’s time as a young footballer, he says he felt powerless to stop the abuse he suffered as the very person doing the damage oversaw his career’s progression.

Paedophiles in sport, he says, position themselves as “dream makers” with the ability to fulfil a child’s ambition, giving them an ability to perpetuate the abuse.

“There are many reasons why you don’t say anything,” Stewart says.

“There were threats that he would kill my parents and kill my brothers, there were the gifts, but I suppose the overriding reason you don’t speak out is because you genuinely believe that that coach has the power in his hands to give and take away the only thing you ever want to be, which for me, was a footballer.

“When I was a child, the worry that this coach had the power to give and take away that dream was why he was able to abuse me for as long as he did. And I think that’s the same in a lot of sports.”

What he says are the only positives he can take from the Sheldon report are 13 recommendations to increase safeguarding in the sport which will add “another layer on top of the safeguarding that’s already there.”

Nevertheless, he worries for the grassroots of the game.

“You have volunteers who are normally in charge of the safeguarding,” he says. “Now, these people have jobs and some of our grassroots football clubs have upwards of 1,500 children, boys and girls. And they may only have one safeguarding officer.

“These people [abusers] operate in these areas, and whilst we have come a long way, we need not sit on our laurels, we need not get complacent.”

VISIT: CNN.com/sport for more news, features and videos
Stewart does admit that football, due to the money in the game, is best placed to implement safeguarding measures for children. Other sports — as has recently been shown with the revelations of sexual abuse in gymnastics — are also vulnerable.

In his own journey, Stewart finds comfort in the work he does helping youngsters.

Speaking to CNN, Stewart didn’t name his abuser but has done so in previous interviews.

His abuser died in Manchester in 2005. While his family were devastated as this prevented the chance for retribution, he was determined to move on.

“I’d had 42 years where this abuser had affected my life and I refused to allow it to affect any more,” Stewart says.

“I’m 56 now and in the few years that I may have, I’d like to think that I can find some solace somehow, and I do that by the work that I do with the football league.”

He added: “I wish when I was at Blackpool starting out, that I had somebody that I thought I could go and speak to, I think I would have enjoyed my football career then.”

According to a statement from Blackpool carried by the Blackpool Gazette, the club said it “commends the bravery of those who came forward to share their experiences with Mr Sheldon and his team and the club expresses its sincere sympathy to those who have suffered abuse.”

The English Premier League said that it is “deeply saddened” by the content of the review and that “our thoughts are with all those affected,” while the English Football League said the review “illustrates the devastating impact that child abuse within football has had on survivors and continues to have on their everyday lives.”

Matthew McConaughey: How actor’s wife ‘injected’ soccer into his blood