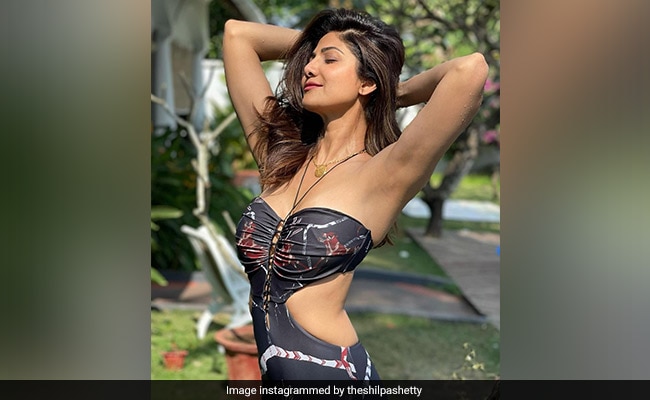 Call it a Shilpa Shetty appreciation post if you please but there is no denying the fact that she is a vision at 45. The actress, who is currently on a vacation in Goa along with her family, shared a picture perfect moment from her holiday diaries. While there’s still time for weekend, Shilpa Shetty is busy enjoying already. In her words: “I’m weekending on a Wednesday.” Shilpa looks gorgeous in what looks like a printed bodycon dress as she soaks up the sun on Goa. She captioned the post: “In the mood to beat every age-old cliché… I’m weekending on a Wednesday.” She accompanied the post with the hashtags #vacationtime, #familytime, #goadiaries, #gratitude, #blessed and #vacay.

Shilpa Shetty’s Instafam filled up the comments section of her post with heart emojis and compliments. Jacqueline Fernandez wrote: “Oh my God! You are a goddess.” Take a look at Shilpa Shetty’s post here:

ICYMI, here are some pictures with Shilpa Shetty’s  Goa vacation, where she has been accompanied by her husband Raj Kundra, their son Viaan Raj Kundra and daughter Samisha. Shilpa’s sister Shamita Shetty and their mom Sunanda Shetty are also vacationing with the actress.

Shilpa Shetty was seen as one of the judges on the TV reality show Super Dancer Chapter 3, alongside choreographer Geeta Kapur and filmmaker Anurag Basu. The actress will next be seen in Sabbir Khan’s upcoming film Nikamma. She will next be seen in Hungama 2, co-starring Paresh Rawal, Meezaan Jaaferi and Pranitha Subhash.

Shilpa Shetty stepped into Bollywood with the 1993 thriller Baazigar, which also featured Kajol and Shah Rukh Khan in the lead roles. She is best-known for her performances in films such as Main Khiladi Tu Anari, Dhadkan, Life In A…Metro, Apne, to name a few.

Shilpa Shetty, Back On Hungama 2 Set, Pays An Ode To “OG Queen” Helen

Top Stories The News Article - February 25, 2021 0
The new code, which the Australian parliament approved Thursday, "will ensure that news media businesses are fairly remunerated for the content they generate,"...

World News The News Article - February 25, 2021 0
The rover's Mastcam-Z instrument, a pair of zoomable color cameras, returned 142 images of its landing site on February 21. The teams at...