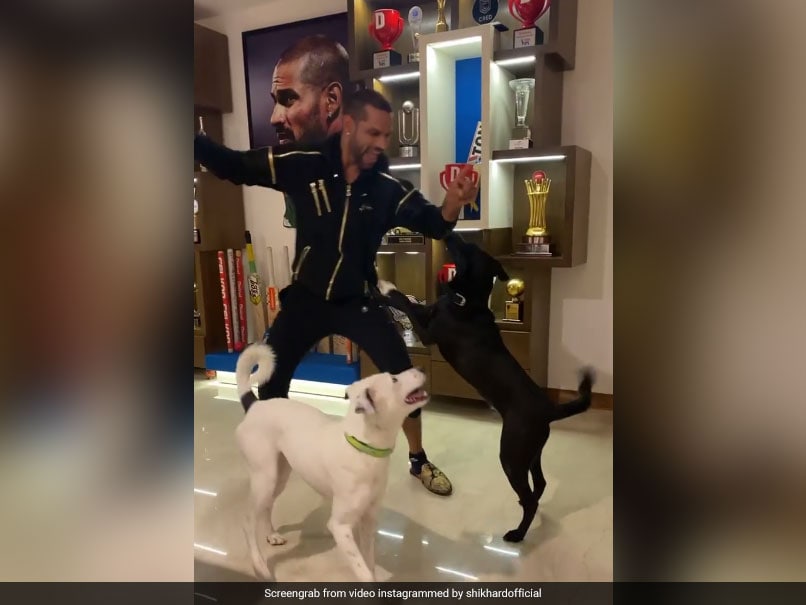 Shikhar Dhawan was seen dancing to a catchy song along with his dogs.© Instagram


KL Rahul was left in splits following a hilarious video posted by teammate Shikhar Dhawan on social media. Dhawan was seen dancing to a catchy song along with his dogs, and that left Rahul in splits. Rahul commented “Hahhahahahahahahhaah” on the post that had the lyrics of the song in the caption. Dhawan was part of India’s limited-overs squads on the tour of Australia while Rahul is currently on tour with the Test team after having played in the limited-overs series.

KL Rahul was deeply amused by a video of Shikhar Dhawan dancing with his pet dogs.

Here is the video posted by Dhawan:


Dhawan and Rahul have opened for India across formats and were most recently seen in the ODI and T20I series in Australia in November-December.

India lost the ODI series 2-1 but came back to win the T20I series by the same margin.

Although Rahul is part of the Test squad, he is yet to play a Test in a series where the teams are tied 1-1 after two games.

Australia emerged victorious by a margin of eight wickets in the first Test at the Adelaide Oval before India bounced back to take the second Test in Melbourne by the same margin to level the series.

India were dismissed for their lowest-ever total of 36 for 9 in the day-night Test in Adelaide after they had lead Australia in the first innings.

In the second Test, though, India made use of a first-innings lead, helped by skipper Ajinkya Rahane‘s hundred, and beat Australia on the fourth day of the match.

The third Test of the series will be held in Sydney followed by the fourth Test in Brisbane.

The third Test will be played at the Sydney Cricket Ground and will begin on January 7, 2021.

IND vs ENG: Wasim Jaffer Is Asked For Meme On Pitch Row, He Comes Up With A Gem | Cricket News

Travel to Hawaii during Covid-19: What you need to know before you go

World News The News Article - March 5, 2021 0
Editor's Note — Coronavirus cases remain high across the globe. Health officials caution that travel increases your chances of getting and spreading the...

China dodged a recession last year. Now it needs to pick up the pace

Top Stories The News Article - March 5, 2021 0
The "Two Sessions" meeting, China's biggest political gathering of the year, kicked off this week. On Friday, all eyes will be on Premier...