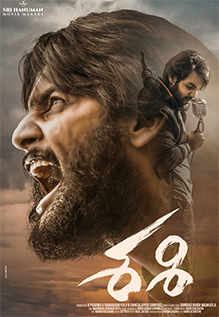 Story: A singer in a local band has issues with anger management and alcohol. A tragedy that occurred in his past tipped him over the edge and turned him into an alcoholic. He then starts stalking a girl whose mental health was impacted due to a similar tragedy that occurred in her life. Will the two of them help each other get over their past or will their union trigger the trauma that is buried within them?

Review : Picture this, a young heartbroken hero with an unkempt beard gulps down bottles of alcohol, smokes packs of cigarettes and unnecessarily gets into a fight with strangers. It is an indication that he is dealing with a tragedy in his life and this is his way of coping with it. Seen it somewhere? So have we. Srinivas Naidu’s Sashi follows the tried-and-tested route of the heartbroken yet combative hero and it hardly makes an impact.
As Sashi opens, we are introduced to Ram Kumar (Aadi Saikumar), a talented singer who has the talent and ability to go places, but is being held back due to his past. His reckless behaviour affects his family, especially his elder brother (Ajay), who tries to get him to settle down and move on from his past. To drive the point home that Raj Kumar is heartbroken, the filmmaker shows him getting involved in numerous fights, which are shown as an outlet for relieving him of his pain. And then Raj Kumar meets Sashi (Surabhi) and is intrigued by her. He begins to stalk her but never talks to her. He soon comes to know that she had suffered trauma in the past which has impacted her mental health. Raj Kumar wants to help her, but her presence also triggers an incident in his own past.
The filmmaker tires you with the portrayal of the protagonist as a sullen, bitter hero and after a point, you stop feeling sorry for him. In fact, by the time the protagonist begins to reveal the reason behind his heartbreak, you’ve lost interest already. We’re introduced to a new character midway in a supposed twist but it hardly resonates with you. The biggest problem with Sashi though is the utter lack of sensitivity while dealing with the issue of mental health. Sample this, a lady who is suffering from a mental health condition is miraculously cured as soon as she is hit on the head with an iron rod. Wonder what professional psychiatrists will make of this, considering an iron rod seems to solve an issue that doctors couldn’t resolve for years.

The only refreshing thing about the film is the song Oka Oka Lokam, which is shot and composed well. But a weak script doesn’t leave much scope for performances. Aadi is impressive in parts but is letdown by a stereotypical characterisation. Surabhi looked good on screen but could have been more expressive.

Sashi fails to get past a tried-and-tested formula of heartbreak, friendship and love and the formula doesn’t quite work. The characterisation of the lead character — as an irresponsible, spoilt brat with anger management issues — brings a deja vu to a certain hit film that made waves in Telugu cinema. Four years later, however, it is hardly feels fresh anymore. With Sashi, you just get a feeling of ‘been there, seen that’.

Exclusive interview! Seerat Kapoor: I was a diehard fan of Winnie The Pooh – Times of India

Tollywood celebs have a relaxing Sunday