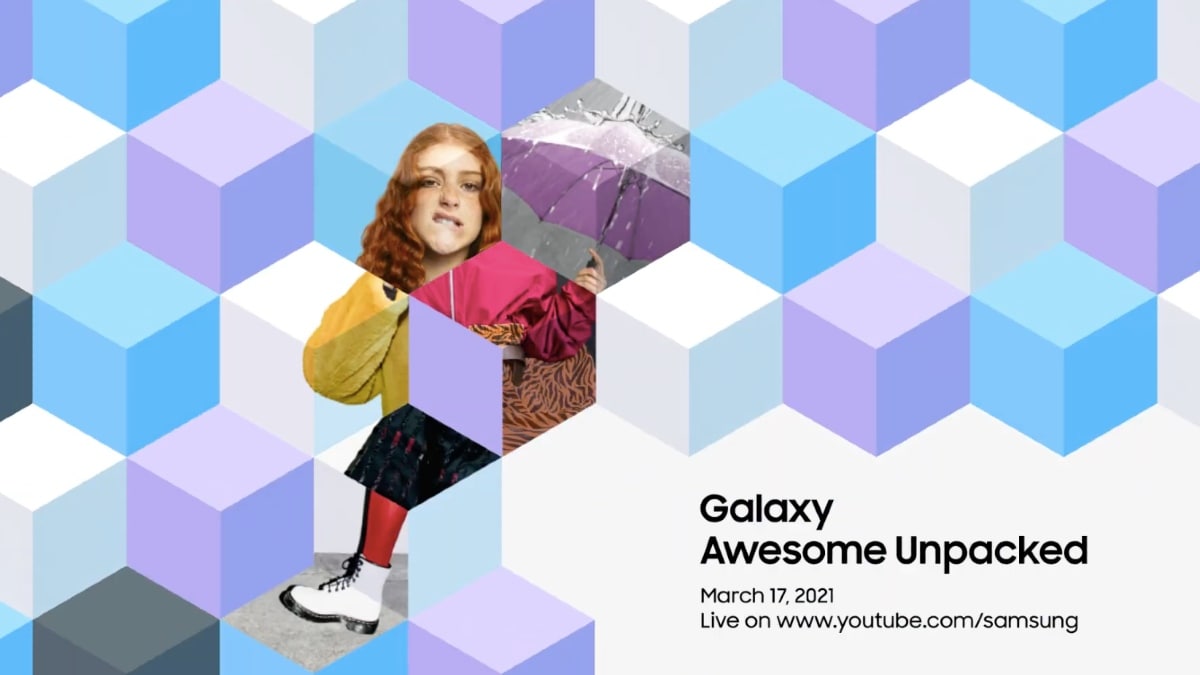 Samsung is hosting its Galaxy Awesome Unpacked event later today where it is expected to unveil the Galaxy A52, Galaxy A52 5G, and Galaxy A72 smartphones. The event will take place virtually through a livestream. As far as the new smartphone models are concerned, much about them may be already fairly well known thanks to the recent spate of leaks and rumours. Both Samsung Galaxy A52 and Galaxy A72 are expected to have quad rear cameras as well as a hole-punch display design. The Galaxy A52 5G is also rumoured to be in the works for today’s launch, with a distinct processor. All three new models could come with IP67-rated dust- and water-resistant build.

The Samsung Galaxy Awesome Unpacked event will begin at 10am ET (7:30pm IST) today. It will be livestreamed through the Samsung Newsroom site and Samsung’s official YouTube channel.

The Samsung Galaxy A52 is tipped to have a 6.5-inch Super AMOLED Infinity-O Display and an octa-core SoC, along with up to 8GB of RAM. The phone could also feature the quad rear camera setup that will include a 64-megapixel primary sensor, along with an 8-megapixel ultra-wide-angle shooter, 5-megapixel tertiary sensor, and a 2-megapixels depth sensor. Particularly for selfies and video chats, the Galaxy A52 is rumoured to have a 32-megapixel camera sensor at the front.

Samsung is said to bring the Galaxy A52 in up to 256GB of onboard storage that may come along with a microSD card slot for further expansion. The phone is also said to have a 4,500mAh battery and include an in-display fingerprint sensor.

The Samsung Galaxy A52 5G is expected to have mostly the same specifications that come with the Galaxy A52, but with a distinct processor that could be Qualcomm Snapdragon 750. The phone is also rumoured to have 120Hz refresh rate.

Unlike the Galaxy A52 and Galaxy A52 5G, the Samsung Galaxy A72 is likely to have a larger, 6.7-inch full-HD+ Super AMOLED Infinity-O Display. The phone is also rumoured to have Qualcomm Snapdragon 720G SoC, along with up to 8GB of RAM. In terms of optics, it is said to have the quad rear camera setup that could include a 64-megapixel primary sensor, 12-megapixel ultra-wide-angle shooter, 5-megapixel macro shooter, and an 8-megapixel sensor with a telephoto lens. The Samsung phone is also said to have a 32-megapixel selfie camera sensor at the front.

The Samsung Galaxy A72 is rumoured to have a 5,000mAh battery with 22.5W fast charging. Moreover, it could come with an in-display fingerprint sensor.

Is Samsung Galaxy F62 the best phone under Rs. 25,000? We discussed this on Orbital, our weekly technology podcast, which you can subscribe to via Apple Podcasts, Google Podcasts, or RSS, download the episode, or just hit the play button below.

Foxconn’s iPhone output in India down amid Covid surge: Sources – Times of India