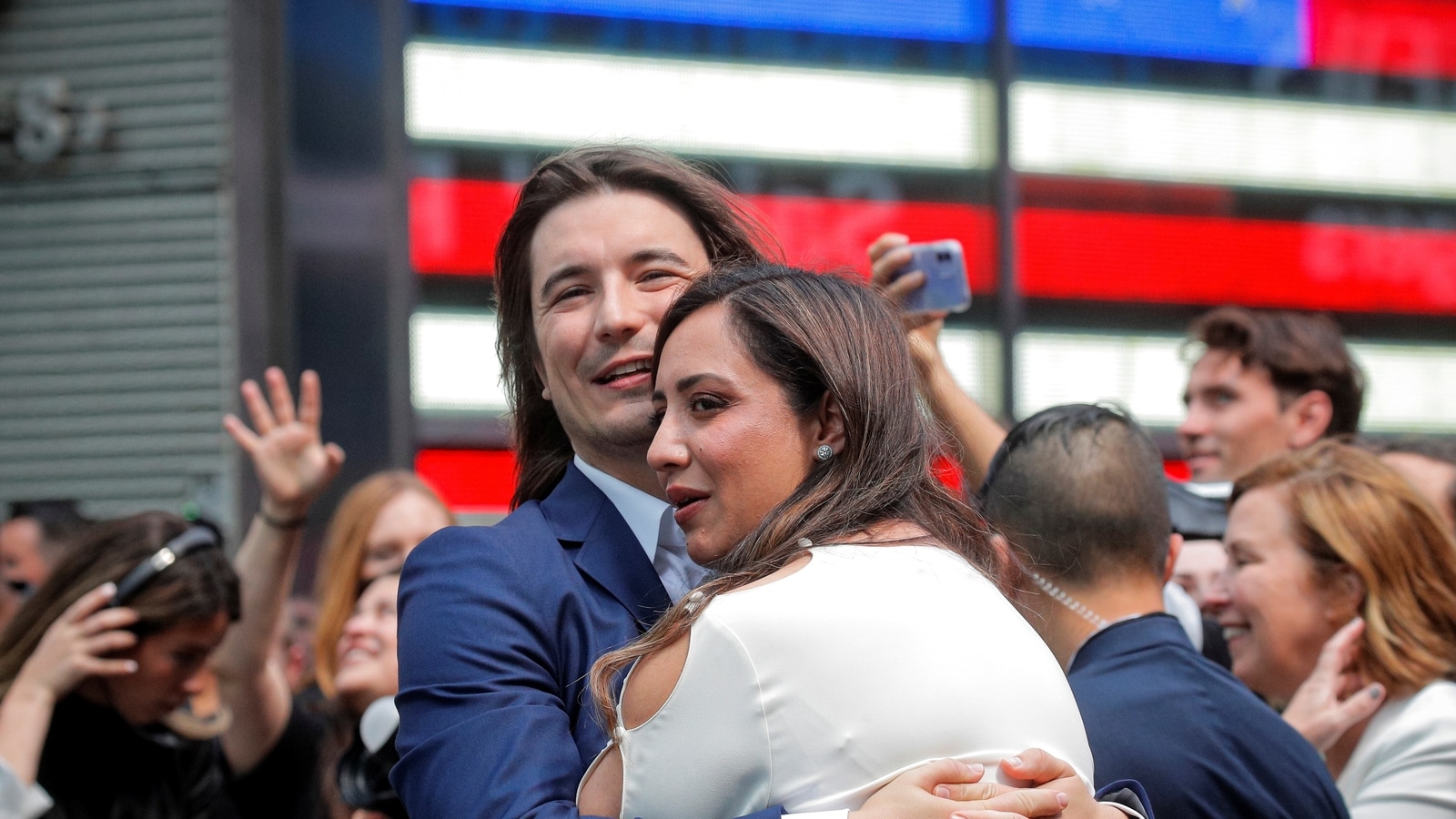 Robinhood made its own leap into the stock market Thursday, the one it helped reshape by bringing millions of new investors to Wall Street, and its shares were falling in their first day of trading.

Robinhood Markets’ stock was at $36.16, as of 1 p.m. Eastern time, down 4.7% from the initial price of $38 set late Wednesday. It’s a disappointing opening for the highly anticipated offering, which had already priced at the low end of its expected range. But the stock could swing sharply through the day given Robinhood’s unusual move to reserve a big chunk of shares for its own smaller-pocketed customers rather than big professional firms. It had been above $38 briefly after opening trading.

At its current price, the company is valued at roughly $30 billion, which puts it on par with companies like Kroger and Old Dominion Freight Line, but its heft on the pop-culture landscape may be even weightier. Robinhood has created plenty of passion, both by users and critics alike.

The company has grown explosively since its 2013 founding, with an estimated 22.5 million funded accounts, after it did away with trading fees and made investing easier and even fun to do with its mobile app. More than half its customers are first-time investors, giving them more ability to keep up with the stock-holding, wealthier households that had been pulling away for years.

But Robinhood has also drawn heaps of criticism from users and regulators alike, with a lengthening list of regulatory settlements. Critics say Robinhood encourages unsophisticated investors to make trades too often that may be too risky.

Some users, meanwhile, are still angry at Robinhood after it and other brokers temporarily locked them out of trading GameStop shares earlier this year, when hordes of smaller-pocketed investors were pushing the stock up in part to spite the monied elite on Wall Street.

Now that Robinhood’s stock is trading on the Nasdaq, its performance gives a real-time look at the market’s judgment of Robinhood’s prospects. The company is already delivering the strong growth that Wall Street is always hungry for: Revenue soared 245% last year to $959 million. It then hit $522 million in the first three months of 2021 alone, more than quadrupling from the year-ago level.

But questions remain about whether regulators may tighten oversight of its main money maker. That’s routing its customers’ orders to big Wall Street trading firms, which pay Robinhood to take the other side of the trade.

Beyond that, Robinhood stands to lose if the boom in trading it’s helped create among smaller-pocketed and novice investors fades. That could come if its oftentimes younger customers go back to doing other things than trading on their phones as the pandemic hopefully eases or if users leave for competitors.

The company has plans for big growth in the future, continuing its evolution since launching as a stock trading app only for iPhones.

“Over time, we want to be the single money app, the most trusted and most culturally relevant money app worldwide,” CEO Vlad Tenev said in an interview. “So, everything that you use your money for, you should be able to do through Robinhood.”

Among them, he said, were direct deposits of paychecks and paying bills online.

He also pushed back on criticism that Robinhood is making the stock market a casino by encouraging its customers to trade more often.

“I think it’s a big, big mischaracterization because if you look at it, the stock market has been one of the greatest wealth creation tools,” he said. “We should be encouraging access to it and not denigrating people that are able to use it. So in a sense, you’re hearing when wealthier customers are engaging in the stock market, it’s investing. But when the rest of us are accessing the stock market, it’s gambling.”

Robinhood’s stock debut is coming at a very welcoming time. With bonds paying very little in interest, investors are willing to pay much higher prices for stocks than they usually have been through history, and the S&P 500 is close to its record high.

Between 2001 and 2020 the average U.S. IPO returned 14.5% from the offer price on day one, according to Renaissance Capital. So far this year, the jump is even greater, at 34%. For IPOs that have raised at least $100 million, the average first-day return this year is 25%.

Robinhood itself raised nearly $1.9 billion in the deal, which it plans to use to expand and to help pay for expected tax obligations.