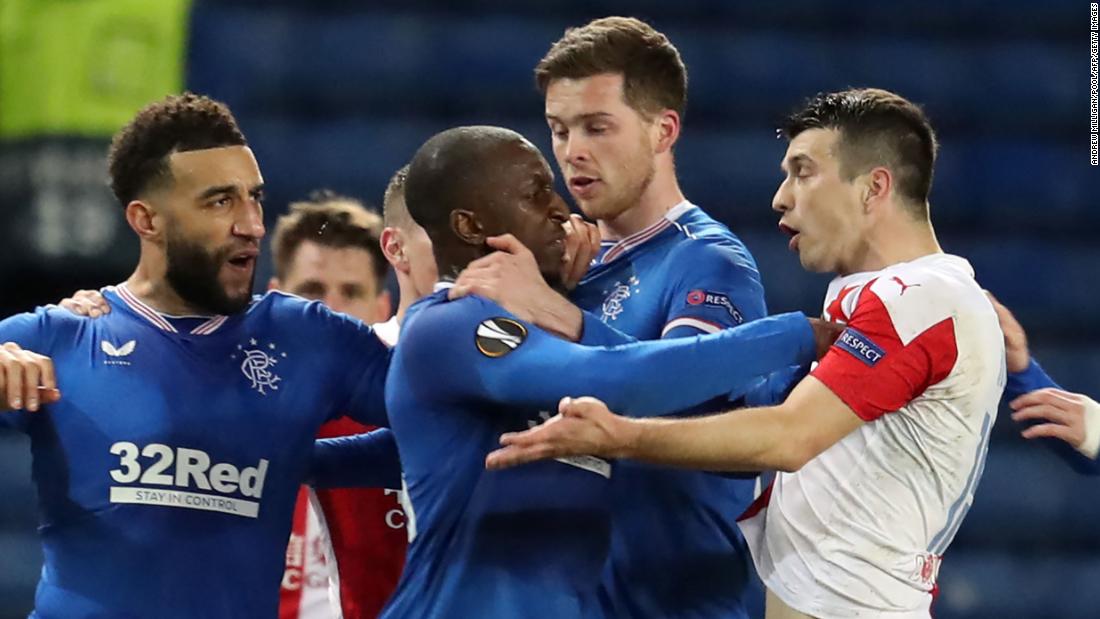 Following his side’s 0-2 Europa League defeat to Slavia Prague, Gerrard spoke to the media where he confirmed that Kamara told him that he was racially abused by Slavia’s Ondrej Kudela.

The incident occurred late in the match when Kudela was seen saying something into Kamara’s ear with his hand covering his mouth.

CNN could not immediately confirm what was said, but Kamara and a nearby teammate reacted instantly, sparking a melee between both teams at the Ibrox Stadium.

Slavia Prague has outright denied the claims in a statement on the club’s website.

“It was said in emotions, but I absolutely deny there was anything racist in those words,” Kudela said, insisting he just swore into Kamara’s ear.

The Czech club also claimed Kudela was assaulted after the team was unable to enter its dressing room at the end of the match but CNN has so far been able to verify these claims.

When asked about the alleged racist incident, Gerrard said he will stand beside Kamara and hoped European soccer’s governing body UEFA would deal with the incident appropriately.

“Other players around it heard it so I will stand toe to toe with Glen Kamara and I will deal with this however Glen Kamara wants to deal with it,” said Gerrard, who insisted he would have backed his player had he decided to walk off the pitch.

“I am proud of all my players tonight for showing solidarity and from the top of this club to the bottom we stand with the players.

“It is over to UEFA now this situation and I just hope it doesn’t get brushed under the carpet.”

UEFA told CNN it was “aware of an incident which occurred in the tunnel after the end of the match and which involved some players of both teams” and said it was waiting to receive reports from match officials before commenting further.

CNN has reached out to Police Scotland for comment but has yet to receive a reply.

READ: Violence towards Asian Americans is ‘hitting differently’ amid the pandemic

The striker — who had been sent off after a brutal collision with goalkeeper Ondrej Kolar — posted a screenshot of the abuse on his Instagram account.

“I could be here all night screenshoting all of these types of comments,” Roofe said in the post.

It’s yet another example of soccer players receiving racist abuse on their social media platforms, a consistent problem that has been highlighted this season.

Last year, Facebook and Instagram announced they would set up a team to fight racism on their platforms and assess racial bias in their algorithms but clubs have called on such platforms to do more to hold users responsible.

Instagram told CNN that it’s continuing to investigate Roofe’s post and said it had removed a number of comments and accounts that broke the rules.

Matthew McConaughey: How actor’s wife ‘injected’ soccer into his blood