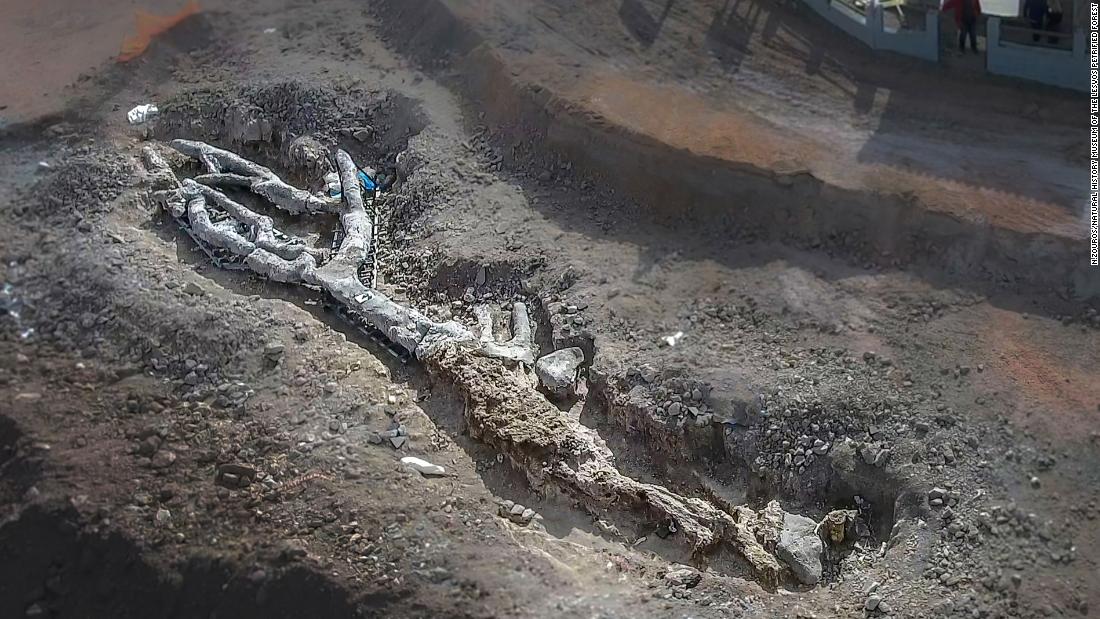 Lesbos’ Petrified Forest was formed 20 million years ago when a volcano exploded in the island’s north, covering the entire area with ash and lava. The area, which spans 15,000 hectares, is renowned for its vivid and colorful fossilized tree trunks.

Nickolas Zouros, a professor of geology at the University of the Aegean, had been excavating the fossilized forest ecosystem but told CNN he had never uncovered such a find.

“We have a lot of findings over these years but the latest ones are the most important — really extraordinary,” he told CNN on Thursday.

Experts uncovered the huge tree, which measured 19.6 meters (21.4 yards) — complete with branches and a root system — during in an excavation along the Kalloni-Sigri highway.

“This is not something very often found in excavations,” Zouros said. “We usually find logs without branches and roots.

“It’s the only one found in the excavation found with the branches, the root system, and was found on a layer full of leaves — we have all the organs of the tree in the regional system. This is unique, until now — we have been excavating for 25 years and have never found such a tree,” he said.

“These trees show that the climate changed in the area of Lesbos — this tree is subtropical. The climatic conditions were subtropical 20 million years ago when the tree was destroyed by the volcanic eruptions. Nowadays by studying this flora — the petrified forest — we can have an idea on how climate change affects the ecosystem,” Zouros said.

Zouros told CNN that vegetation records showed that half of the species once found on the island had died off.

“They could not survive climate change,” he said. “This is important information we can use in order to explain to visitors that climate change has severe consequences to the species living here, to the modern ecosystems.”

In addition to the “extraordinary” tree, experts uncovered more than 150 logs at another site, around 200 kilometers (124 miles) from where the complete tree was discovered.

“The new finds by Professor Zouros are stunning,” Chronis Tzedakis, a professor of physical geography at University College London who is not associated with the excavation, told CNN.

“Retrieving a tree with its branches, roots and leaves still attached is extremely rare, while 150 trunks recovered together will provide a unique snapshot of one point in time that will allow us to assess the biodiversity of the ecosystem.”

Tzedakis added: “More generally, although there are several petrified forests around the world, Sigri is exceptional because several trees are found in their original position, with their root systems intact. This provides a rare glimpse of a Miocene forest, in terms of its size and density.”

The excavation during which the tree was found was completed in January, Zouros said.

Judgment of Paris: The tasting that changed wine forever

These beautiful Italian towns will pay you to work remotely

World News The News Article - May 14, 2021 0
Although these are parts of life taken for granted for adolescents, they have been absent the past year for millions of young Americans....