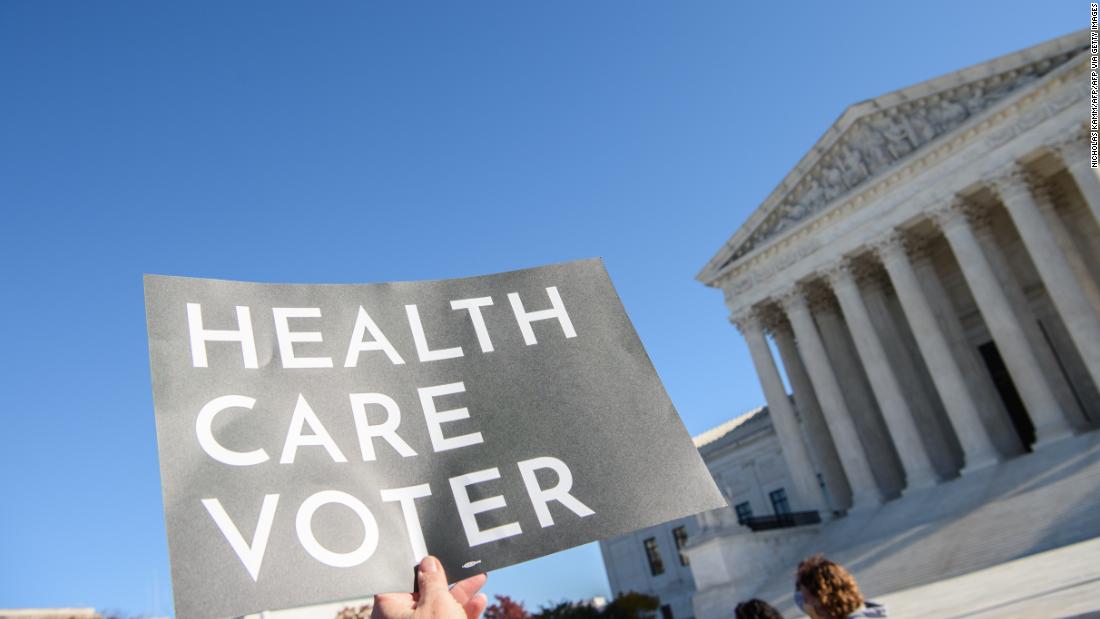 The newest Supreme Court Justice, Amy Coney Barrett, was sworn in just two weeks ago despite Democratic objections, including over her previous writings while a law professor, suggesting that she might vote to overturn the ACA. Now, Supreme Court watchers are trying to read the tea leaves: How might the court rule in a case that will determine whether millions of Americans can keep their health insurance in the midst of a global pandemic?
But as we try to divine the justices’ conclusions, it’s also worth pausing to ask why we’re here — with three Trump-appointed conservative justices, two of them rushed through controversial confirmation processes; with a Republican Party that can’t overturn the ACA in Congress, and so instead goes running to the courts to do their bidding; with conservative politicians and activists who claim to want to protect people’s health insurance and coverage for those with preexisting conditions, and then embark on a series of lawsuits that would guarantee just the opposite (the ACA ensures that preexisting conditions don’t make you uninsurable).

This is about the law, yes. But it’s really about politics, and one side’s attempts to undermine American health care protections against the will of the people.

Indeed, this is the third time a challenge to the ACA has made its way to the Supreme Court, as the Trump administration and a Republican Congress has tried to obliterate it.

At issue in this case is the individual mandate, the rule requiring all Americans to have health insurance or pay a penalty. The mandate was also key in a 2012 case, in which Chief Justice John Roberts held that the penalty was a tax, and Congress has the power to levy taxes. That preserved the ACA.
When President Donald Trump took office, though, he signed into law a Republican tax bill that killed the penalty. Now, Texas Republicans and the Trump administration itself are arguing that the “it’s a tax” argument is mooted by the lack of a penalty, and thus the whole law is unconstitutional. If the court goes their way, the ACA is dead, and any future attempt at a national health insurance or health care system becomes that much more difficult.

Guessing what the judges are thinking based on their questions during oral arguments is a dangerous game, but given that we’re already playing it, we can discern positive hints — and reason for optimism for the majority of Americans who want the ACA to stand. The judges, for example, spent notable time on the question of standing — that is, whether the person who brought the case can actually bring it.

Generally, to have standing to challenge a law in court, you have to prove you were actually harmed — “I don’t like this law” or even “I believe this law is unconstitutional” is insufficient. Does it make sense, Chief Justice John Roberts asked, to allow “somebody not injured” by a specific portion of the ACA to “roam around through those thousands of pages,” picking and choosing which one they want to challenge? If Texas doesn’t even have standing to bring their case, then that’s that, case dismissed.

There’s also the issue of severability — that is, does the court have to decide on the constitutionality of the entire ACA, or can they sever the individual mandate from the rest of the law, which would allow them to invalidate one piece of the ACA without scrapping the whole thing?

Severability allows the court to, in the words of Justice Roberts, “use a scalpel rather than a bulldozer” in excising the parts of the law that won’t stand, while leaving the rest of the body more or less intact. Conservative Trump-appointed justice, Brett Kavanaugh, indicated that he’s sympathetic to the surgical route, saying that this strikes him as a “straightforward case for severability.”

That’s all good news. We can’t predict what the court will do, but it’s fairly safe to guess that the most conservative judges, who voted to jettison the ACA last time around, will do the same this time, and the more liberal ones who voted to retain it will stick with their previous conclusions, too. Roberts, though, is less predictable; it seems Kavanaugh may be, too. Their statements in court today indicate that the ACA may be safe for now.
Or at least, safe from Supreme Court interference. There’s no indication that the ACA is safe from Republican attacks, even as voters continue to signal that they want the law to stand. The Republican Party just lost the presidency. Their total domination of the US Senate is under threat. Voters have sent a message, and the country’s highest court may be sending one, too: Keep your hands off health care.

Now, we just have to hope they’ll listen.

Opinion: The fashion police are judging you on Zoom

World News The News Article - March 3, 2021 0
Republicans are pushing hard at the state level to generally make it more difficult to vote, and say they want to make the...

Hawley defends opposition to every Biden Cabinet nominee: ‘I take them one at a...