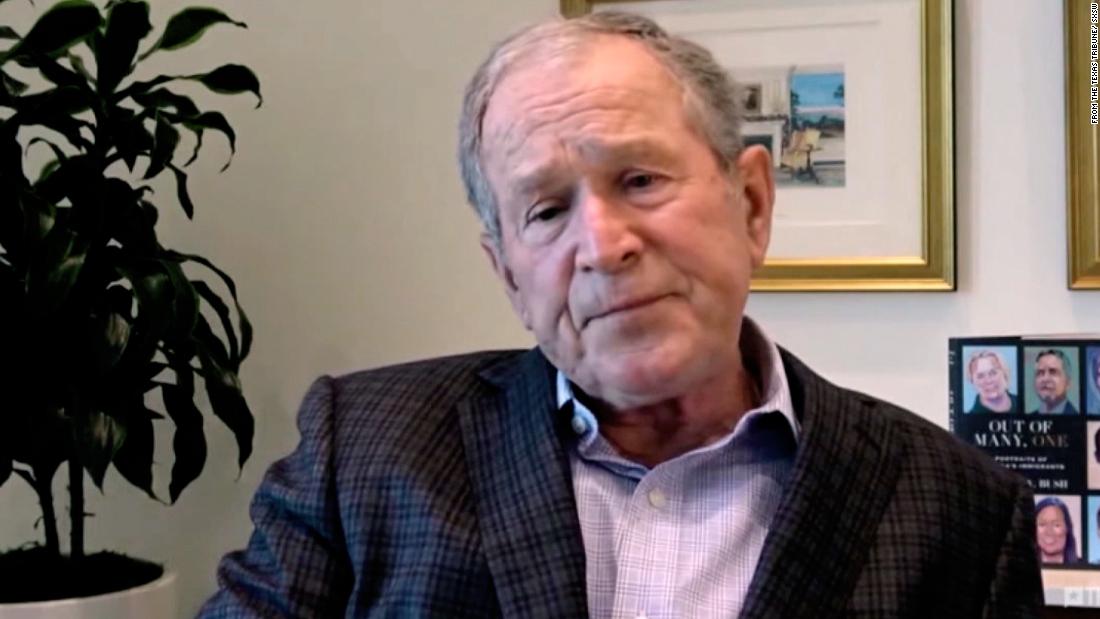 So, it was newsworthy when Bush, in an interview with the Texas Tribune as part of the Austin-based South by Southwest festival, spoke out in personal terms about the January 6 insurrection in Washington. “I was sick to my stomach,” he said, “to see our nation’s Capitol being stormed by hostile forces.”
Good for him for using clear, plain, unambiguous language. Those who attacked our Capitol were indeed “hostile forces.” They may also be traitors. For an American, to wage war against the United States is treason — the only crime specifically defined in the Constitution. Or perhaps they were terrorists.
At another level, though, it is disheartening to realize that Bush’s comments were so noteworthy. In any other time, it would hardly surprise us to learn that a former President didn’t like seeing his nation’s Capitol attacked, its police officers bludgeoned and brutalized, its hallways defiled with feces, its Senate Chamber breached and occupied and the Vice President hustled to safety from a mob screaming “Hang Mike Pence!”
These are not normal times, and the Republican Party is not a normal political party. Already, Trumpist Republicans are trying to gaslight their followers, saying what they saw on January 6 was not what actually happened. Sen. Ron Johnson of Wisconsin described the domestic terrorists whose riot caused five deaths and scores of injuries this way: “I knew these were people who love this country, that truly respect law enforcement, would never do anything to break the law.”
This is how completely Trumpian dishonesty has come to dominate the GOP. Those who attack our Capitol with pipe bombs, Molotov cocktails, a spear, tasers and bear spray are described as “people who love this country.” A Capitol Police officer is dead, and 140 officers are injured, by people “that truly respect law enforcement.” More than 300 people have been charged with federal offenses — but they “would never do anything to break the law.”
When the House voted Thursday to award the Congressional Gold Medal to the US Capitol Police, 12 Republicans voted no. Their excuses were shocking in their denial of reality. Rep. Louie Gohmert of Texas offered an alternative resolution that never mentioned the insurrection, and referred to the three police officers whose lives were lost (one as a direct result of the attack, two by suicide afterwards) as merely having “all passed in January 2021.” Some of the disgraceful dozen said they objected to the word “insurrectionists” to describe those who used violence to attack the US Capitol and thwart the proceedings of our government — which is precisely the definition of the word.
It has become commonplace to label bald-faced lies as “Orwellian”, after the author of 1984, where Big Brother gave us Newspeak in which “War is Peace” and “Ignorance is Strength.” But perhaps we need to update that label. In the 21st century, to lie so obviously, so blatantly, so incontrovertibly is, simply, Trumpian.
It is odd, perhaps, that President Bush, a politician who so frequently found himself pinned to the mat by the English language, would emerge now as a beacon of clarity. The man who once asked, “Is our children learning?” has given the world the two short phrases that perfectly bracket the Trump era, from its bizarre beginning to disgraceful conclusion. In the moments after Trump finished his dark and florid Inaugural Address, Bush reportedly captured the moment in five words: “That was some weird s–t.”
Four long years later, Bush summed up the reaction to the attack on our Capitol — or at least the reaction of all decent, patriotic Americans — in just six words, as evocative as they are accurate: “I was sick to my stomach.”

Opinion: There will be no graceful exit from the Covid-19 pandemic