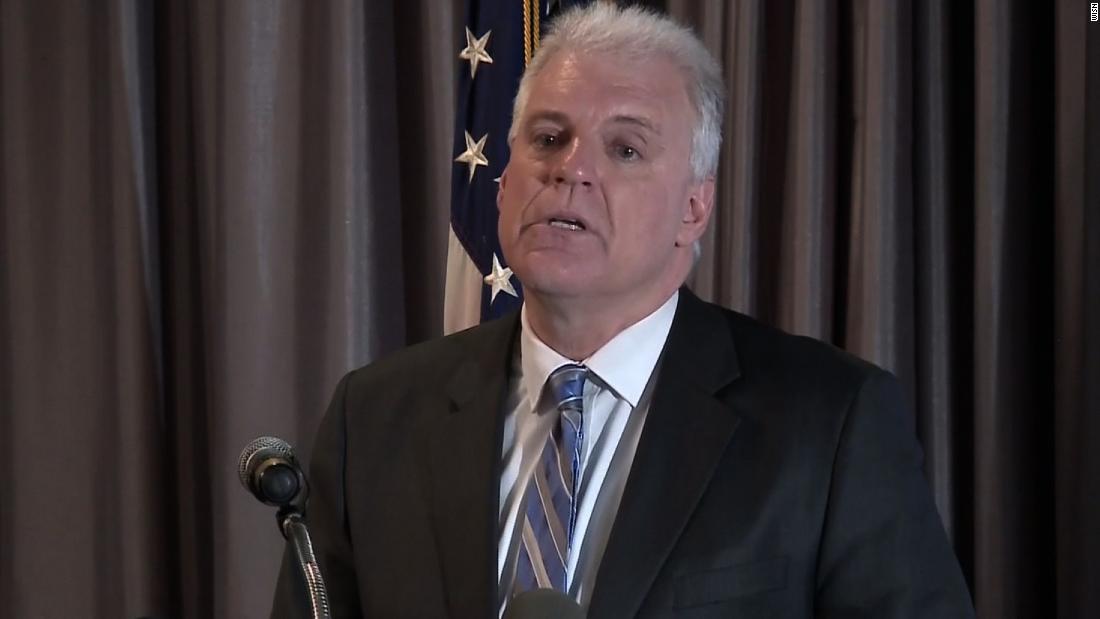 Sheskey, a White officer, shot Blake, a 29-year-old Black man, seven times in the back while responding to a domestic incident on August 23, 2020. Blake survived the shooting but was left paralyzed from the waist down.

“It is my decision now that no Kenosha law enforcement officer will be charged with any criminal offense based on the facts and laws,” Graveley said Tuesday.

Graveley announced there will be no charges for the other two officers involved in the incident. They were identified by the Wisconsin Justice Department in September as Officers Vincent Arenas and Brittany Meronek.

Sheskey told investigators that he used deadly force during the chaotic encounter because he was afraid Blake, while attempting to flee the scene, was trying to kidnap a child in the backseat of the vehicle.

The Wisconsin Department of Justice had said Blake had a knife in his possession and the weapon was found on the floorboard of his vehicle. Blake himself told authorities he possessed a knife, Graveley said.

“Jacob Blake, while actively resisting, arms himself with a knife,” Graveley said, adding that he’s heard supports of Blake say he was unarmed. “It’s absolutely incontrovertible that Jacob Blake was armed with a knife during this encounter … All the discussion that he’s unarmed contradicts even what he himself has said multiple times.”

An attorney for Blake’s family disputed that Blake posed a threat.

“There was no point in the video that is articulable for an officer to say that he was under harm at that particular point. I think that’s completely bogus and I think that is just a rationalization to try to show what is really, essentially, an intentional act,” attorney B’Ivory LaMarr said during a press conference shortly after Graveley’s announcement Tuesday.

“It’s not against the law to have a knife, people have knives for a variety of different reasons. Jacob Blake is privy to having a knife.”

Graveley said he called on US attorneys office to do a parallel civil rights investigation that would be a separate investigation with its own conclusion.

Blake family attorney Ben Crump, and co-counsels B’Ivory LaMarr and Patrick A. Salvi II, released a statement shortly after the announcement expressing their disappointment in the decision.

“We feel this decision failed not only Jacob and his family, but the community that protested and demanded justice,” the statement read. “Officer Sheskey’s actions sparked outrage and advocacy throughout the country, but the District Attorney’s decision not to charge the officer who shot Jacob in the back multiple times, leaving him paralyzed, further destroys trust in our justice system. This sends the wrong message to police officers throughout the country.”

Blake’s father, Jacob Blake Sr., on Monday called for charges against the officer while urging Kenosha to “stand up and make some noise.”

He added, “Let’s be heard around the world. We’re not going to stop in Kenosha. We’re headed to DC. We’re headed to Nancy Pelosi’s office. We’re headed to whoever is going to be in charge of the Senate. Because this has got to be federally heard, for not just my son, but for everybody who has suffered police brutality — everyone.”

Blake’s uncle, Justin Blake, said his nephew has been working to recover from the incident and has become “our new hero.”

“The way he is taking this mental approach, the way he puts all his effort into his therapy, and the passion, if anybody could walk again one day, it would be my nephew,” Justin Blake said.

Gov. Evers: ‘I hope for peace and justice for Jacob’

Gov. Tony Evers issued a statement Tuesday saying Blake’s life has been forever changed, and that his children experienced trauma “no kid should ever endure.”

“Today’s decision is further evidence that our work is not done—we must work each day in earnest toward a more just, more fair, and more equitable state and country, and to combat the racism experienced by Black Wisconsinites,” he said. “I hope for peace and justice for Jacob, his family, and the entire Kenosha community.”

“Wisconsin should adopt a statewide use-of-force standard providing that officers’ primary duty is to preserve life and that officers must use de-escalation techniques to avoid force whenever possible,” Kaul said in a statement. “And law enforcement officers conducting patrol activities should have body-worn cameras.”

Carl Takei, senior staff attorney with the American Civil Liberties Union’s Trone Center for Justice and Equality, said the decision Tuesday “emphasizes how the criminal legal system, from police to prosecutors, have functioned to oppress and harm Black people.”

“While accountability for the officer might have led to some semblance of justice, real justice would have been Jacob Blake never being shot in the first place,” Takei said.

Ahead of the decision, Kenosha officials prepared for potential unrest, with the City Council granting Mayor John Antaramian emergency powers once the announcement is made.

Wisconsin Gov. Tony Evers also announced Monday he is mobilizing 500 National Guard troops ahead of the decision at the request of local officials.

“Our members of the National Guard will be on hand to support local first responders, ensure Kenoshans are able to assemble safely, and to protect critical infrastructure as necessary,” Evers said in the statement.

Terry Rose is an attorney whose office is downtown Kenosha. As he watched crews board up businesses near the courthouse, he told CNN he thinks it represents “a community in fear.”

“I guess it’s necessary but I don’t like the feeling that this is necessary,” Rose said. “I mean they have 500 troops here. They have the police department and the sheriff’s department they have other agencies. But the assumption that we’re going to be firebombed is the wrong assumption.”

Vaun Mayes, an organizer with the Community Task force, said the precautionary steps Kenosha has taken are hurtful.

“We’ve seen these tactics, a number of times in Milwaukee and across the state where they call themselves preparing for unrest. The unrest happens when there has been an action and there is a reaction to it,” he said. “For instance, if there’s a protest and people start to get tear gas … so when you start to posture up like that without having anything going on, then it becomes inciteful within itself.”

In an op-ed published in the Kenosha News on December 27, Mayor Antaramian and Police Chief Daniel Miskinis said at the time they did not know what the decision would be or when it would arrive, but they said they will be prepared.

“What we do know is that regardless of the decision, people will have differing opinions and strong emotions about it. That is everyone’s right. Whether you agree or disagree, we ask that you express your opinions peacefully and lawfully,” the officials wrote.

The officials touched on the violence that erupted at protests in the aftermath of Blake’s shooting, during which two people were killed and a third was seriously wounded in a shooting during a protest.

“We will not — we cannot — tolerate the kind of violence we saw on our streets earlier this year and we will take definitive steps to protect our residents and businesses,” Antaramian and Miskinis wrote.

On Tuesday, Rittenhouse pleaded not guilty to all charges against him during a virtual arraignment.

Rittenhouse also is charged with possession of a dangerous weapon while under the age of 18, a misdemeanor, according to court records.

An attorney for Rittenhouse, Mark Richards, argued that Rittenhouse acted in self-defense in a preliminary hearing last month.

Rittenhouse is due back in court on March 10 for a judicial pre-trial hearing.

They are each requesting $10 million in compensation, due to “intentional acts and negligence,” Grosskreutz’s attorney Kimberly Motley said.

This story has been updated with the correct spelling of Michael Graveley’s last name.

Ex-USA Gymnastics coach John Geddert, who had ties to Larry Nassar, is charged with sex crimes and human trafficking