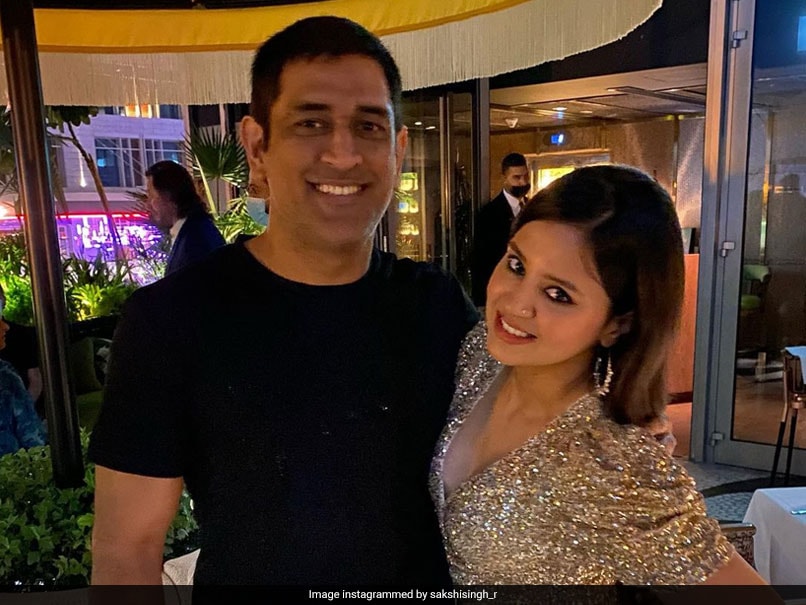 MS Dhoni can be seen wearing a black t-shirt, with Sakshi comfortable in a silver-coloured dress.© Instagram


MS Dhoni’s wife Sakshi, who celebrated her 32nd birthday on Thursday, posted an adorable picture with her husband, with both of them sporting a big smile. Sakshi posted the picture on her Instagram account with Dhoni seen wearing a black t-shirt, and Sakshi looking comfortable in a glittery silver-coloured dress. The veteran Indian cricketer was last seen representing Chennai Super Kings (CSK), during the recently concluded 13th edition of the Indian Premier League (IPL). Dhoni has been the skipper of the Chennai-based franchise in all editions of the tournament so far, helping the team emerge as one of the most successful sides in the history of the league.

However, CSK did not fare well in IPL 2020, failing to make it to the playoffs for the first time in their history. Dhoni struggled to make much of an impact, scoring just 200 runs at an average of 25 in 14 matches at a strike rate of 116.27.

The 39-year-old had announced his retirement from international cricket in August this year.

The Indian team will be next taking on Australia in an away series, comprising of three ODI ties, the same number of T20I clashes and four Test matches. Rohit Sharma will not be featuring for Team India in the limited over clashes, with uncertainty over his match fitness.

Skipper Virat Kohli will head back home following the end of the first Test, on paternity leave granted by the Board of Control for Cricket in India (BCCI).

World News The News Article - March 6, 2021 0
Charles Williams, public works director in Jackson, said in a news conference Friday that there have been improvements in water restoration in the...