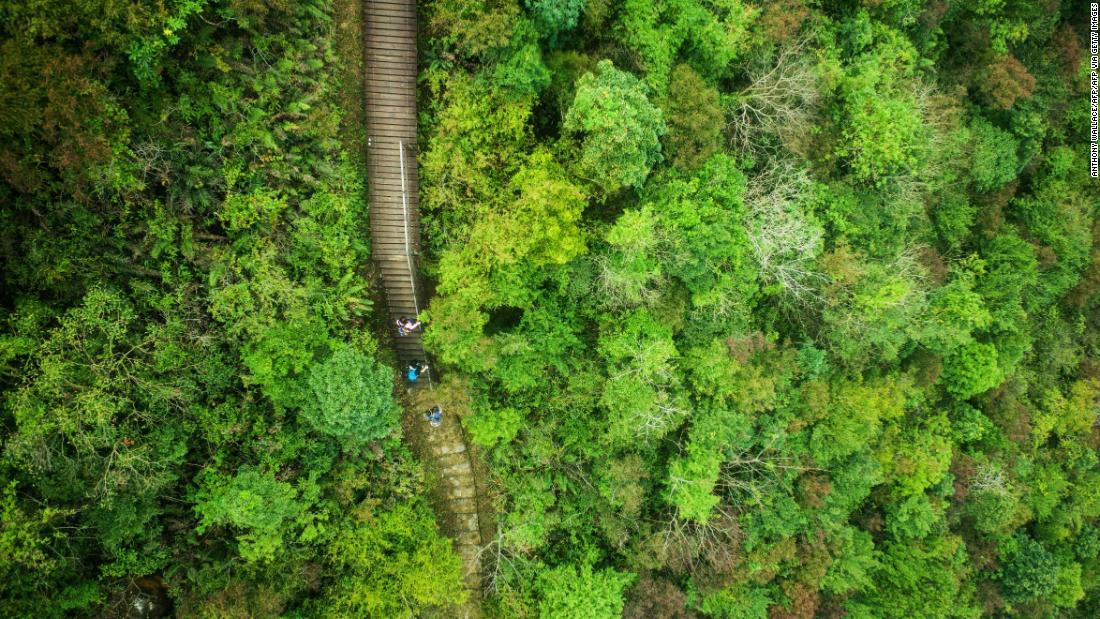 He’s standing on a hiking trail in Ma On Shan Country Park, a jumble of mountains and lush forest in eastern Hong Kong. Beneath his feet, the path itself, once neatly marked, has blurred, its stones surrounded by scuffed up dirt and trampled vegetation.

That’s a problem for Yeung, a country parks officer with the Agricultural, Fisheries and Conservation Department (AFCD), which is responsible for managing Hong Kong’s 440 square kilometers (170 sq miles) of public land — sprawling hills and mountains, beaches, and islands, dotted with trails, barbecue areas, and camping grounds.

Wild cows are one of a number of species that can be seen in Hong Kong’s country parks.

Hiking trails in Hong Kong have to endure intense temperatures, torrential rains and typhoons, which blow down trees and block paths. Regular use widens a trail, as more and more people step off the path to overtake or walk several persons abreast, and water damage exacerbates the problem by turning dirt into treacherous mud.

On top of their intended users, a path also has to accommodate buffalo, wild cows, and boars, who occasionally dig parts of it up. But these intruders are nothing compared to the primary problem: the people the trail was built for.

What does coronavirus have to do with hiking?

Trail maintenance has, like many other issues, been exacerbated by the coronavirus pandemic.

While paths are designed to be hiked, their use also means a slow destruction, forcing AFCD to engage in constant repairs and upkeep across more than 610 kilometers (380 miles) of trails.

“Frequent use and high usage of the trails has become a problem for us,” Yeung says. “At some times, deterioration has actually been faster than the maintenance, so we have to work to try and find a way to preserve sustainable usage.”

People pose for photos at a viewpoint overlooking Sai Kung in Hong Kong’s Ma On Shan Country Park on October 16, 2020.

With some 7.5 million people sharing 1,100 square kilometers (425 sq miles), Hong Kong is among the most densely populated places on earth. By comparison, the smallest state in the United States, Rhode Island, is more than double the total area, with around a seventh of the population. And unlike Rhode Island, Hong Kong has a reputation — only partly deserved — of being a “Blade Runner”-style urbanscape of neon and high-rises.

Cut off from traveling elsewhere, and with many offices, restaurants, beaches and gyms in the city closed, people have been confined more than ever to their apartments, among the smallest and most expensive in any city in the world.

“The size of public space available to most people is like the size of a toilet cubicle,” said Alicia Lui, project director of TrailWatch, a Hong Kong-based hiking app. “People have to go somewhere for fresh air and exercise.”

For many locals, hiking has been a life saver amid the pandemic. TrailWatch says it has seen a nearly 150% increase in the number of new app downloads in the first half of the year, compared to the same time in 2019, and a more than 100% uptick in the number of people tracking hikes using the app.

The busier the paths are, the quicker they degrade, and the less time AFCD staff have for repairs. While sections can be closed off, this risks people detouring around them through the forest — exactly what the department is trying to avoid.

Felix Yeung, a country parks officer, poses for a photo at a viewpoint in Ma On Shan Country Park, Hong Kong, on October 16, 2020.

AFCD does not have dedicated staff charged solely with trail maintenance. Responsibility is spread among all staff based in the parks, who also look after fire prevention, facility upkeep, assisting country park visitors and other tasks.

Since 2016, AFCD has engaged around 600 volunteers in trail maintenance workshops, but the work is still largely carried out by employees. That work can be arduous and slow. To avoid further damaging the trails or surrounding forest, AFCD largely does not use vehicles, and nearly all materials are transported by hand, sometimes for miles uphill.

While stones and other materials are usually sourced locally, they occasionally have to be lugged up the mountain from near sea level. Piles of materials are created at the top of a trail during maintenance, before being moved down it during construction.

A pile of rocks and other materials wait to be used for path maintenance outside an AFCD office in the Ma On Shan Country Park.

The effort that goes into building and maintaining the trails can sometimes be invisible. AFCD does most of its work during weekdays and off-season. And in recent times, the department has shifted away from the concrete and paving stones of decades past to give the trails a more natural appearance.

Today, there are around 130 official hiking trails in Hong Kong, plus many more unofficial paths used as shortcuts by locals or blazed (against AFCD’s wishes and advice) by adventurous enthusiasts. These range from easy “family trails” to genuinely challenging routes across and over mountains.

Hong Kong’s oldest paths date back to before the region was colonized by the British, in the second half of the 19th century, small trails connecting villages and communities scattered across the area that is now the New Territories.

Other trails pass by abandoned gun turrets and fortresses dating back to World War II. As well as boars and buffalo, hikers can occasionally spot monkeys and snakes, of which Hong Kong has multiple venomous — though thankfully rare — varieties.

A woman walks on a recently repaired trail in the Ma On Shan Country Park, Hong Kong, on October 16, 2020.

“Hong Kong is pretty unique in that you can pretty much get to a country park within an hour, often by public transport,” said Lui, the TrailWatch project director.

But with that ease of access can also come issues of overcrowding and overuse, and AFCD admits that it has struggled in the past to educate park users over the need to preserve hiking trails and avoid going off path.

“A lot of people are not aware that trails are impacted by people hiking,” Lui said. “It’s not just that they walk on the same trail, as it gets crowded, people end up fighting for space, expanding the path, you start to see potholes, the soil loosens. And everything is an Instagrammable location now, so people aren’t just walking on the trails, they’re climbing rocks, they’re overstepping boundaries (to get photos).”

Yeung, the AFCD officer, said that in the past, the government largely carried out maintenance itself, and adopted a very “top down” model which did little to engage the community. This has changed gradually, and AFCD increasingly relies on hikers to help, especially with responding to major damage, such as caused by typhoons. AFCD is also investing more in education, encouraging people to “get their hands dirty, and communicate with the spirit of the country park,” Yeung said.

This picture taken on January 12, 2016 shows a monkey sitting on a fence in the Kam Shan Country Park in Hong Kong.

Lui said that the problem may not be so easy to solve, particularly as country park use is on the rise.

“Maintaining trails is actually a scientific art form, it’s not like anyone can just go out there and maintain them,” she said. “People need to be more aware and get involved in protecting trails, including thinking about whether it makes sense to have periods where certain trails are rested completely.”

Beyond the wear and tear caused by visitors, country parks have sometimes come under threat from other areas. Some 40% of Hong Kong is currently protected parkland, and that land is sometimes pointed to as a potential solution for the city’s housing woes. Developers have also expressed a desire to carve off land for golf courses or luxury estates, though such plans are a far harder sell to the public.

Nor would the cost of shrinking country parks outweigh any benefits, environmental groups argue, pointing to other potential areas for expanding housing, particularly brownfield (ex-industrial) sites and existing, underutilized land.

“Development within country parks … would cause irreversible damage to the environment and ecosystems, which is definitely not sustainable growth,” Friends of the Earth Hong Kong said in 2018.

Trailwatch’s Lui agreed, saying that any development of the country parks or cutting back on hiking areas would be a major blow to one of the city’s best features.

Traveling to Greece during Covid-19: What you need to know before you go