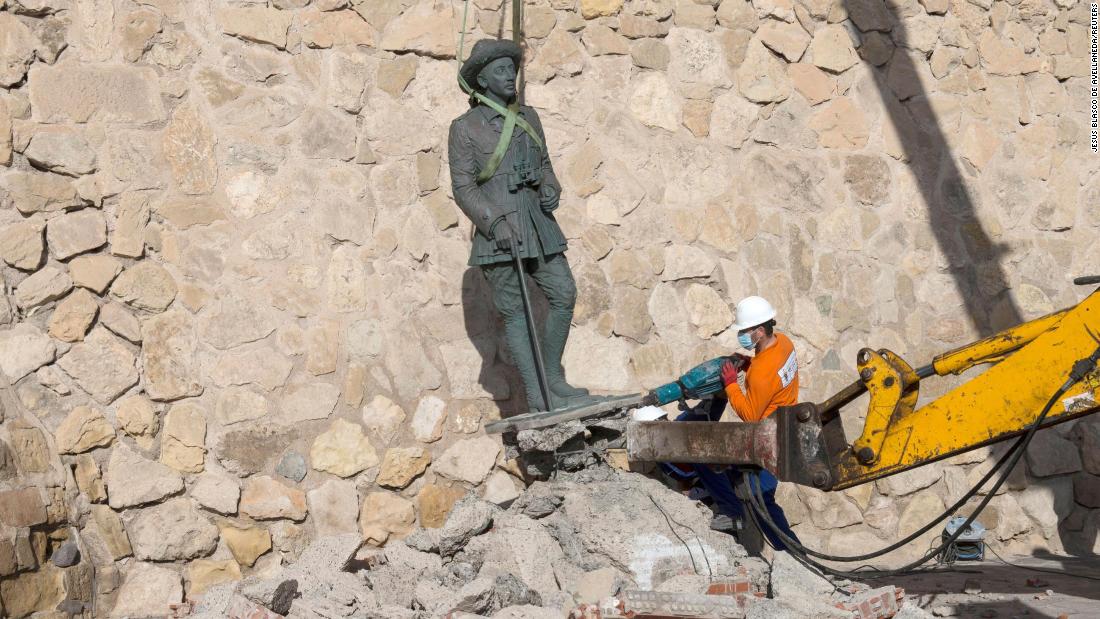 Workers took away the statue, which stood on a street in Melilla, a Spanish enclave in Morocco, after the local assembly approved its removal Monday, the local Socialist party (PSOE), which is part of the ruling coalition in the regional government, said on Twitter.

The removal was timed to coincide with the 40th anniversary of an attempted coup by Franco supporters, a government source told CNN.

There were 14 votes in favor, 10 abstentions and one vote against, from the right-wing Vox party, he said.

“From today Melilla recovers dignity and justice,” said Gloria Rojas, vice president of Melilla and a member of the Socialist party, according to a PSOE tweet.

The bronze statue was made by sculptor Enrique Novo and erected in 1978, three years after Franco’s death, the government source said.

It commemorated his 1921 defense of Melilla, during the Rif War against the Berber tribes of Morocco’s Rif mountains, according to the source.

The statue was moved in 2005 but remained in public view until Tuesday, the last statue of Franco standing on Spanish soil, he added.

It is now in storage, the source said, but its removal is permanent.

Tuesday was the anniversary of the 1981 attempted coup carried out by military officers who held lawmakers in Madrid hostage for 18 hours. The attempt took place just six years after Franco died, ushering in Spain’s transition to democracy.

Franco ruled Spain from the late 1930s and thousands of executions were carried out by his nationalist regime during the Spanish Civil War and in the years that followed.

Spain was officially neutral during World War II but supported the Axis powers of Germany and Italy.

After the war, Franco was seen by many as the last surviving fascist dictator and was ostracized by the United Nations. His regime was partly rehabilitated during the Cold War because of Franco’s staunch anti-communist ideology.

In 2007, the Spanish government passed the Law of Historical Memory, which formally condemns the Franco regime. Symbols connected to Franco must be removed from public view, the law stipulates.

In October 2019, Franco’s remains were exhumed from the grand mausoleum where he was buried in 1975 to the nearby Mingorrubio state cemetery in El Pardo, where his wife is buried.

The exhumation was a key policy pledge from Socialist Prime Minister Pedro Sanchez when he came to power in 2018.

Franco’s family and his far-right supporters opposed the plan and the family unsuccessfully appealed the decision in the courts.