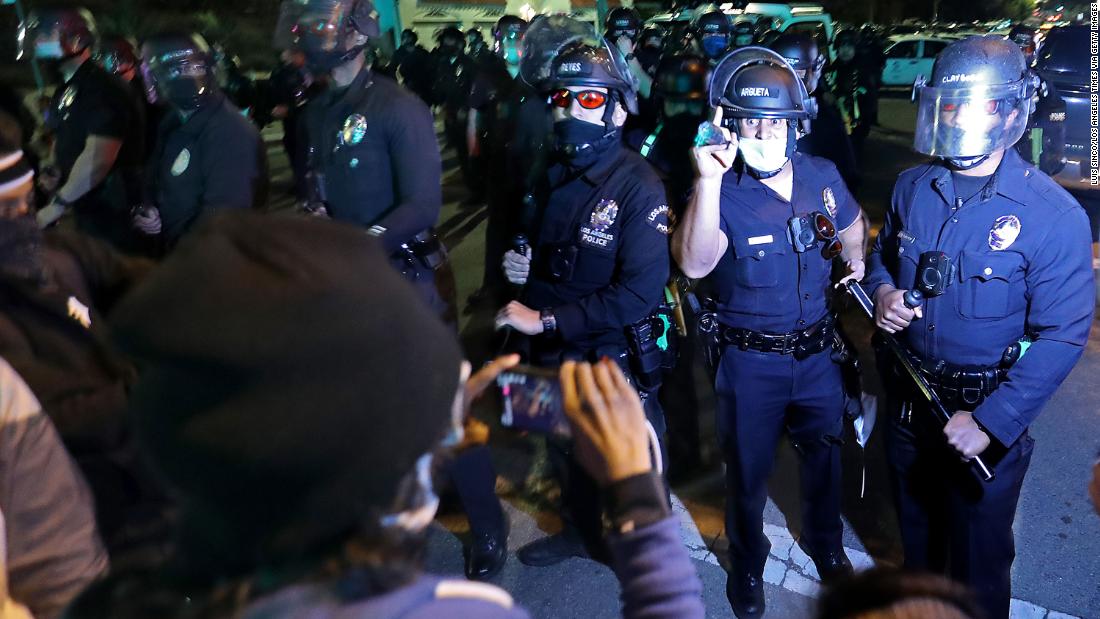 At least 40 tents used by the homeless could still be seen in the park Thursday behind fencing erected by city contractors, CNN affiliate KTLA reported.

Garcetti’s office did not immediately respond to a request for comment.

In a statement Thursday, the police department said “there were verbal confrontations from protestors” but the demonstration “remained a largely peaceful protest.”

Police were deployed “in support of our Recreation and Parks partners who began a shut down of Echo Park for much needed safety maintenance,” the LAPD said via Twitter.

The SELAH Neighborhood Homeless Coalition called on city officials to postpone the park closure. The group asked that the homeless and their shelters be allowed to remain until “all unhoused residents there have the necessary time to meaningfully connect with service providers.”

The coalition, in a statement posted on social media, said the decision to shut the park was made “without reasonable notice to those who will be most directly affected.” The closure will have “serious, detrimental implications” on the homeless.

Coalition board member Genevieve Liang said she was concerned about police physically removing people from the park Thursday night.

“We just really … do not want to see any kind of forced evictions more than what is already happening,” she said.

Community organizer Albert Corado said residents who support the homeless will return to the park Thursday.

“We’re going to be back — try to get as close as we can and make our voices heard and see if we can be of service to people who are going to be displaced,” said Corado, who is running for a City Council seat next year. “We’re here as support.”

Jesse Mendez, who told KTLA that she was experiencing homelessness, called the park a well-kept “safe haven.”

“The pandemic has not even been lifted and they’re trying to evacuate people who have nothing anymore,” Mendez told the station, which reported that neighbors have complained about drug use and trash at the encampment of more than 200 tents.

Los Angeles City Council member Mitch O’Farrell said the LAPD was “asked to support community safety efforts during installation of the fencing to assist in the rehabilitation of Echo Park. Department personnel are deployed in that area so that those efforts can begin in a safe and unimpeded manner.”

Homeless services providers will be in the park Thursday to “work with the park’s unhoused residents to offer shelter and services to anyone who wants and needs the assistance,” O’Farrell said via Twitter. He said more than 120 homeless people had already moved to transitional housing.

The LAPD said a “public safety perimeter” was established to allow city workers to put up the fence amid “a high level of social media traffic requesting resistance to any City activity in Echo Park.”

Police said one arrest was made for failing to disperse. No officers were injured and no reports were made of injuries to demonstrators, police said. Two use-of-force complaints were made.