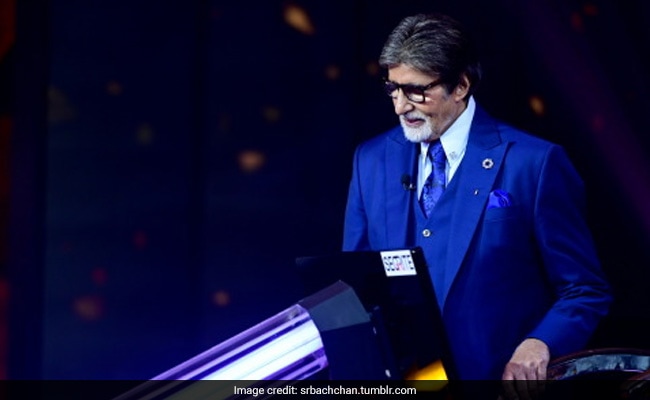 On Wednesday’s episode of Kaun Banega Crorepati 12, Amitabh Bachchan resumed the game with contestant Jai Kurukshetra. Mr Bachchan, who always urges the contestants to talk about their background and memorable life experiences, took a trip down memory lane during the course of this episode. Speaking to Jai Kurukshetra, Mr Bachchan recounted an incident from his school days which is etched in his mind till date. The 77-year-old actor said during his school days, he asked his mother Teji Bachchan for some Rs 2 to join the school cricket team. Big B recalls, he was told that they don’t have the money. On that note, Mr Bachchan added remembering that incident always kept him grounded later in life. “Rs 2 ka mulya kya hai woh aaj hume yaad ata hai,” he said.

Amitabh Bachchan also revealed that he was fond of photography and always wanted to own a camera. Mr Bachchan’s father Harivansh Rai Bachchan brought him his first camera from a trip to Russia – Big B was already an actor by then but receiving the camera from his father made it a prized possession and he owns it till date. “The value of these things stay with us all our life.”

Jai Kurukshetra quit the show with a prize money of Rs 12.5 lakh. Police constable Jaswinder Singh from Maharashtra was the second contestant on Wednesday’s episode of Kaun Banega Crorepati 12.

Here are some questions from Wednesday’s episode of Kaun Banega Crorepati 12:

# Thierry Delaporte has been appointed as the CEO and MD of which Indian IT giant?

# Who has written this poem from the movie Jab Tak Hai Haan?

# The Ongole cattle breed, normally used in Mexican bull fights, is native to which Indian state?

# The Maharaja of which place provided a scholarship to Dr B R Ambedkar for his post-graduate education at Columbia University, New York?

# According to the Treaty Of Sugauli, which river marked a natural boundary between India and Nepal?

# Which of these cards in India has an expiry date or validity mentioned on it?

# Who is the first member of the renowned Thackeray family to have contested a Vidhan Sabha election?

Watch this space for more updates on Kaun Banega Crorepati 12.

Amitabh Bachchan expresses his gratitude for all the ‘get well soon’ messages he received from fans after undergoing a surgery, shares latest pictures –...

Watch: Deepika Padukone steps out for dinner; a video of a woman trying to pull her purse goes viral – Times of India

Exclusive interview! Nayan Shukla on her struggle: Rejection came in large numbers and comforting words were too little – Times of India