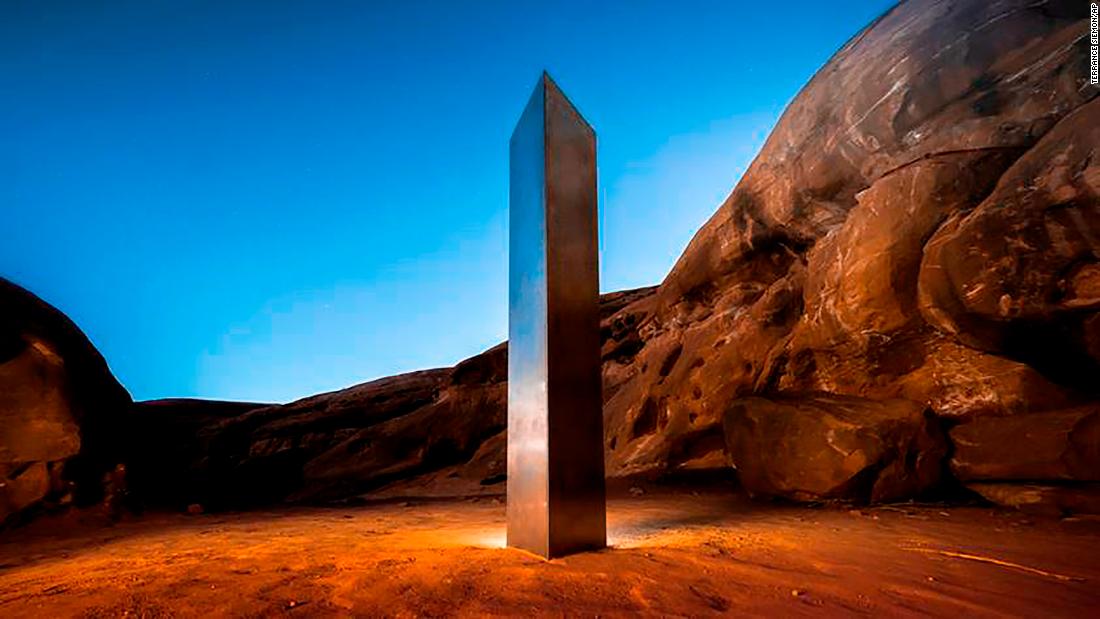 Is it art or the work of aliens? This question has enthralled the internet since the discovery and disappearance of an enigmatic 10-foot-tall silver structure among the red rocks of remote southeastern Utah last month.

Dubbed the “Utah monolith,” the object was likened to the unsettling extraterrestrial machines — also of uncertain origins — from Stanley Kubrick’s “2001: A Space Odyssey.” It was found, by chance, during a routine helicopter flight by Utah’s Department of Public Safety (DPS). And its mystery only deepened when an internet sleuth on Reddit posted Google Earth images suggesting that it had been around since 2016.

The Utah monolith may be a few centuries younger than the prehistoric stone circle of Stonehenge or the statues of Easter Island, which have both seen their fair share of alien theories, but the silver pillar had a similar aura of mystery around it. As with those works, the public wanted to know: Who made it and why?

“I think many people immediately saw it through the lens of (land art) — the history of artists making interventions in the landscape,” said senior curator at the Utah Museum of Fine Arts, Whitney Tassie, over video. The state is known for its history of awe-inspiring earthworks, including Robert Smithson’s “Spiral Jetty” on Great Salt Lake and Nancy Holt’s concrete cylindrical “Sun Tunnels,” which align with sunrise and sunset during the solstices.

The most compelling and poetic argument — that it was the work of late Minimalist sculptor John McCracken, and somehow installed after his death in 2011 — was made by his gallerist, David Zwirner, on November 27 but retracted only three days later.

“When you look closely at the photos of the Utah monolith, you will see rivets and screws that are not consistent with how John wanted his work to be constructed,” Zwirner said in a statement. “He was a perfectionist.”

A private gesture made public

Since the monolith was first discovered, the drama has unfolded across several acts.

After people began arriving at its newly revealed location, the monolith was swiftly removed — an act broadcast on TikTok — by a group claiming to be concerned about the impact that eager tourists could have on the land. In a cheeky statement, Utah DPS reminded followers that installing art without authorization is illegal “no matter what planet you’re from,” while Tassie emphasized the importance of formal processes for land art, including conducting studies to understand how the work will affect the environment.

Within days, imitation monoliths had sprung up in a Romanian forest and a California mountaintop, but both disappeared as quickly as they arrived. News of these ephemeral works went viral, too, as they seemed to add to the enigma of the original structure, and teasingly suggested that aliens could have touched down in other places, too.
The Utah monolith has all the elements required to become the year’s biggest art story, at a time when the art world has been stifled by the pandemic. This tale is starkly different from last year’s headliner, Maurizio Cattelan duct-taping a banana to a wall at Art Basel in Miami, or Banksy’s $1.4 million self-destructing artwork the year before that. Both of these were outlandish acts meant to draw attention and poke fun at the art world. The monolith, however, is a quiet mystery that might never have drawn any attention at all.

Maurizio Cattelan’s “Comedian” consisted of a banana duct-taped to a wall. One of the editions sold for $120,000 — and then someone ate it. Credit: Cindy Ord/Getty Images

“It’s an exciting thing to create something you’ve done and put it in a secret place where only you know about it,” said art historian and chief curator of Artful, an art travel company, Matthew Israel, in a phone interview. “How interesting is that?”

Such an act is rare in the art world — most artworks put out in the world have been intended for some type of audience, even if very small. In the late 1960s, land artist Holt undertook her “Buried Poem” series, concealing five poems for five different people in different landscapes around the United States. Only they received the map to each of the locations, making it a truly intimate deed.

The identity of the unknown creator is a different sort of mystery than that of Banksy, the world’s most famous anonymous artist. Banksy has kept his name and face hidden for years, dropping new works of street art, as if they were clues, on the London underground, a Venetian canal or a Tokyo pier.

Banksy’s “Girl with Balloon” was renamed to “Love is in the Bin” after the anonymous artist intentionally had the work partially shred itself during a Sotheby’s auction. Credit: Tristan Fewings/Getty Images for Sotheby’s

“We live in a culture where we’re so focused on individuals and identity,” said Israel, whose new book, “A Year in the Art World,” recounts his experiences in the contemporary art world. “When people decide to withhold their identities, it’s particularly notable.”

In Banksy’s case, keeping his identity secret has bolstered his visibility, with the clandestine nature of his practice often drawing more attention than the works themselves. If the Utah monolith was the work of an artist, however, it does not appear to be an ongoing performance, but a solitary gesture.

Hikers discovered a third monolith in Atascadero, California on Tuesday, December 2. Though copycats have added new enticing chapters to the mystery, erecting installations without permits is illegal and could attract visitors who damage the land. Credit: Kaytlyn Leslie/The Tribune of San Luis Obispo/AP

And maybe the Utah monolith wasn’t intended to be an artwork at all — though that doesn’t mean it’s not, now, art.

“It’s a blank slate. It’s fascinating in that way,” Israel said, pointing out that meaning has been ascribed to works throughout the history of art.

“It’s doing the same things that art does,” said Tassie. “(The fact) that it has inspired conversations about land management and land use is fantastic.”

Unless the Utah monolith’s creator comes forward, it may go down in modern art legend: the curious metallic object that stood in secret for years but then spread across the internet in mere hours.

“It’s not just the anonymous artist, but the lack of detail around the piece makes it more mythical,” said Tassie. “It’s open ended, and it inspires creative thought, because everybody’s theories are possible.”

‘Crazy Rich Asians’ director Jon M. Chu: ‘The American dream is not a given’

‘Another Round’: How a film about a drinking experiment became a life-affirming Oscars hit