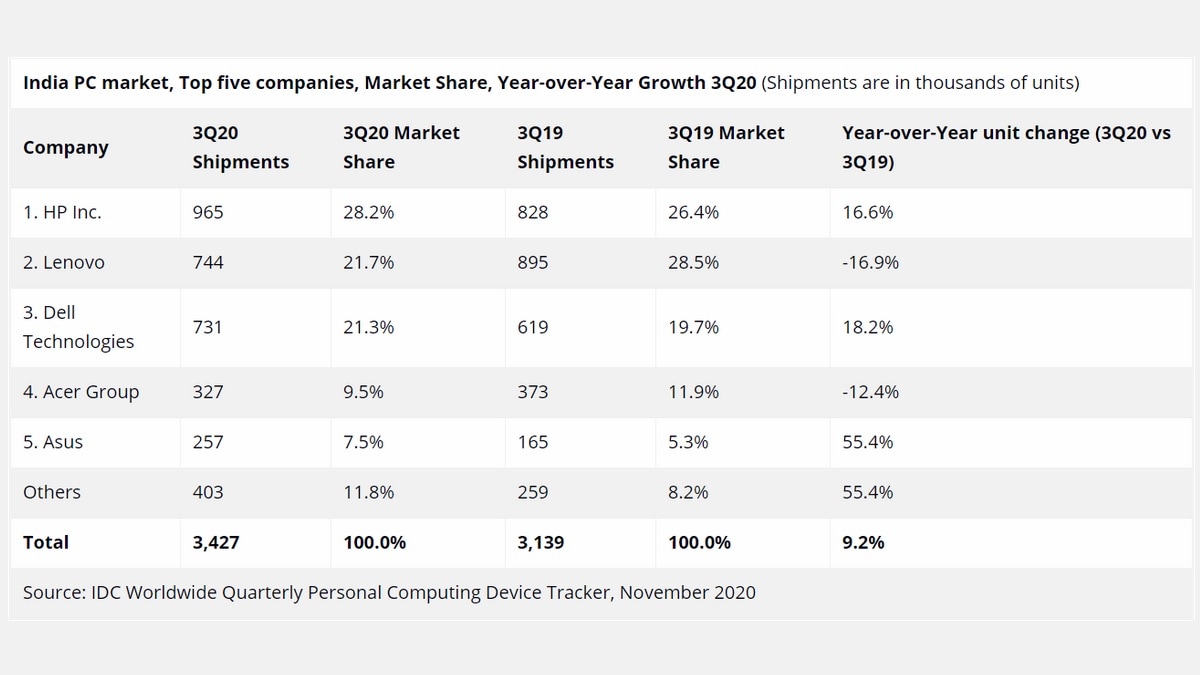 Indian PC market has seen significant growth in the third quarter of 2020, shipping 3.4 million units in total. These units include desktops, notebooks, and workstations. The analysis by International Data Corporation (IDC) shows that this is a 9.2 percent year-over-year (YoY) growth, compared to the third quarter of last year. IDC notes that this growth is due to a demand for e-learning and requirements for remote working during the ongoing pandemic. HP led the market with 28.2 percent share in Q3 2020, followed by Lenovo, Dell, and others.

IDC states that two million units were shipped in the consumer segment, marking a 41.7 percent YoY growth. When compared to the previous quarter, it is a 167.2 percent growth. The commercial segment, on the other hand, saw a more marginal 3.1 percent YoY growth whereas notebook shipments grew by 70.1 percent YoY. Shipments to the SMBs (small and medium-sized businesses) grew 5.5 percent YoY in the quarter as lockdown restrictions were relaxed and business operations started for most sectors.

Q3 2020 has become the biggest quarter for the Indian PC market in the last seven years, IDC notes.

IDC mentions that the growth in the overall Indian PC market is due to the increased demand for e-learning and the need for laptops and desktops to suit work from home settings. Schools and colleges, now being virtual, also contributed to the increased demand for consumer notebooks, especially in large cities. It is being predicted that Q4 2020 will also be a strong quarter of shipments as the demand for notebook PCs is still higher than the current supply.

Which is the best TV under Rs. 25,000? We discussed this on Orbital, our weekly technology podcast, which you can subscribe to via Apple Podcasts, Google Podcasts, or RSS, download the episode, or just hit the play button below.