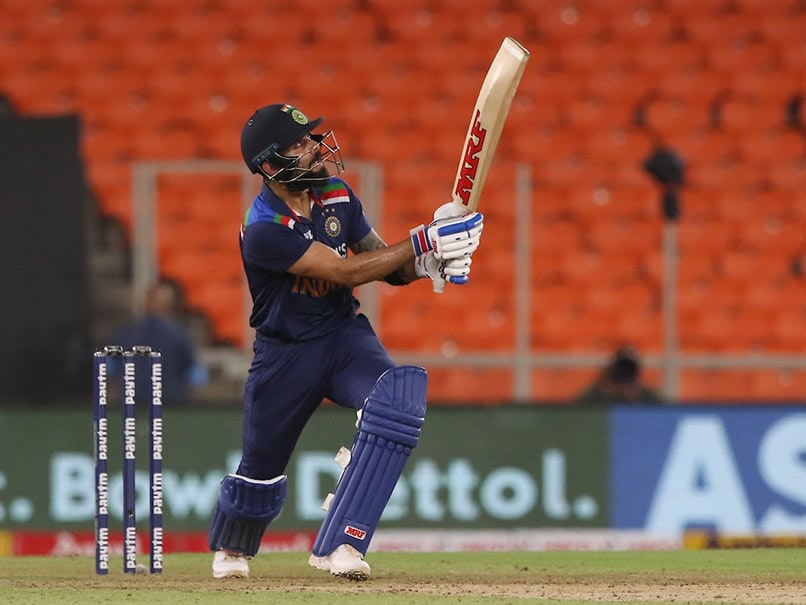 IND vs ENG: Virat Kohli plays a shot during the third T20I, at the Narendra Modi Stadium in Ahmedabad.© BCCI


Virat Kohli was in top batting form for India during the third T20I, but couldn’t prevent a defeat against England. The Indian skipper slammed an unbeaten half-century, which has been hailed by fans and pundits. Smashing 77 off 46 balls, Kohli helped his side post a target of 157 runs, which England overcame in 18.2 overs. Kohli’s knock came at a time, when India were losing wickets in a quick manner with the likes of Rohit Sharma (15), KL Rahul (0) and Ishan Kishan (4) faltering against the opposition bowling department. The India captain’s knock was praised by Dinesh Karthik, who hailed him in his own unique way. Taking to Twitter, the Tamil Nadu captain tweeted, “Starts like a corolla , finishes like a FERRARI #KingKohli”.

Kohli was called on to bat earlier than expected with England pacer Mark Wood cruising past India’s batting order. Wood registered three wickets in the match, which included the dismissals of openers Rohit and Rahul.

On his arrival, India were meandering at 20 for two and he began in style, hitting a boundary in the first delivery itself. He began in a slow manner, but soon accelerated his innings and went on to accumulate eight fours and four sixes.

But at the end, Kohli’s knock was outdone by Jos Buttler, who also registered an unbeaten century for England. Scoring 83 off 52 balls, the opener helped his side take a 2-1 lead in the ongoing five-match T20I series.

Both sides face each other again in the fourth T20I on Thursday, at the Narendra Modi Stadium in Ahmedabad.