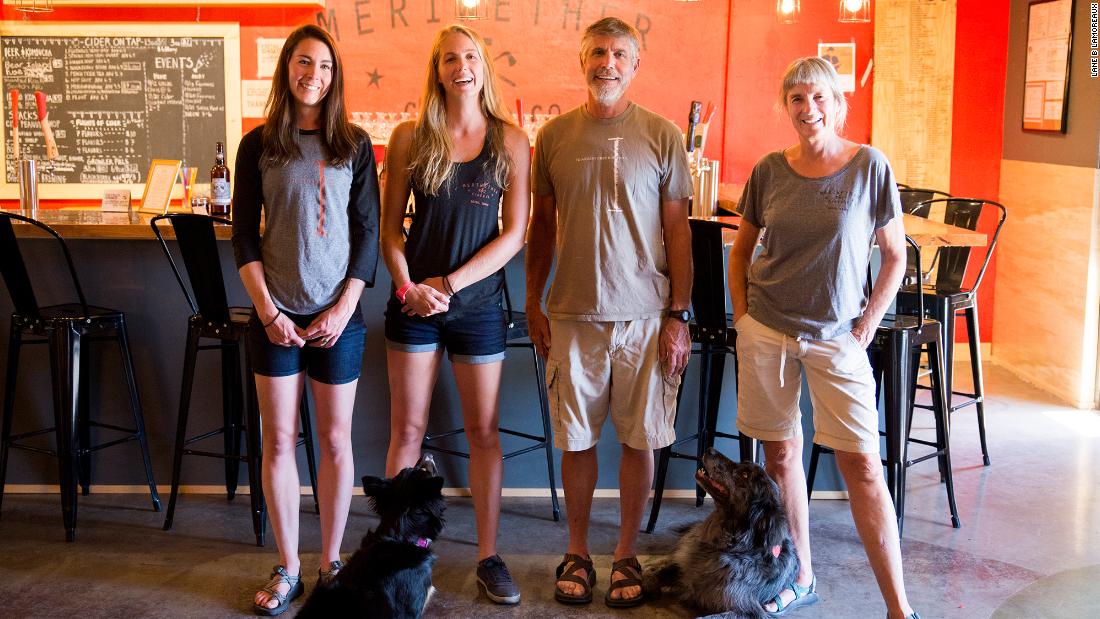 And few expect to break even given all that’s happened as a result of the coronavirus pandemic.

Yet Meriwether Cider in Boise, Idaho, is on track to meet that mark, thanks in large part to Covid-related federal assistance, according to Ann Leadbetter, who owns the business with her husband and two daughters.

Also helpful: Meriwether Cider makes money a few ways, so while some lines of revenue took a hit, others went up. Sales are down at its two sit-down venues — a cider house in downtown Boise and a smaller tap room at its bottling facility in nearby Garden City. So are its sales to bars and restaurants. But the company has made more from its distribution to grocery stores and the curbside pickup it now offers customers.

When CNN Business first connected with Leadbetter in June, she said she was in the midst of a marketing nightmare, figuring out how best to convey to customers the new Covid-safety rules and services allowed at each location, which shifted depending on which phase of reopening was in effect. And she worried about another shutdown.

She and her family outfitted their venues to be Covid-compliant and to reassure customers it is safe to drink there. They installed ionizing filters to clean the air, removed half their indoor seating, expanded and heated their patio area at their downtown location and instituted even stricter cleaning protocols.

They also posted signs with friendly but firm messages encouraging customers to be Covid courteous:

“Maintain a love buffer of 6 feet from other guests.”

“It’s a crazy time. Show kindness and understanding to everyone. We all need to be cut a little slack.”

It seems to have worked so far. Leadbetter said there have been no Covid cases at their establishments and customers have been coming in.

Looking across all their lines of business combined, she noted that so far, “We’re doing as well as we did in 2019 in terms of revenue.”

Stimulus made a big difference

Leadbetter is quick to credit the federal help they got. She received a loan through the Paycheck Protection Program in April and spent the funds — primarily on payroll — by the end of June. The loan was forgiven just last week, she said.

But what was just as helpful, if not more so, was not having to make payments on two Small Business Administration loans, which the family took out when they first opened Meriwether Cider in 2015.

Under the CARES Act, the federal government agreed to make six months’ worth of payments on all 7(a) loans, to help business owners free up some cash through the initial months of the pandemic.

As a result, Leadbetter said, even after spending more to make her facilities Covid compliant, her expenses overall went down because the business loan payments were eliminated “That’s what’s helping us break even,” she said.

So, too, is the fact that Meriwether Cider doesn’t just depend on serving customers individual drinks at its two sit-down venues, where revenue has taken a sizable hit. The company also sells bottles for takeaway at its Garden City facility and sells wholesale to grocers.

But the downtown retail location is still at risk.

While winter is normally a slow season for the Cider House in downtown Boise, Leadbetter worries it will be much worse this year even if there isn’t another shutdown because people may be too afraid to go out at all.

“If we have a harsh winter and no one is siting outside and we still can only have widely spaced tables, I can see we might have to give [the downtown location] up,” Leadbetter said.

But, she added, that doesn’t mean shutting Meriwether Cider down altogether. “We have a strong packaged-goods business and a strong fan base.”

While she always remains “more optimistic than is warranted,” she and her family wanted to cushion themselves financially against any further restrictions or shutdowns.

So this month they decided to take out a third Covid-related federal assist: An SBA Emergency Injury Disaster Loan for $100,000 at 3.75%. The payments on the loan are deferred for one year. At the end of that period, Leadbetter said, “we can give it all back if we decide we don’t need it.”

But with Idaho now starting to take more restrictive measures to contain the Covid surge, she’s glad to have it. “The worst-case scenario seems to be happening with probable lockdowns and a return to curbside and delivery.”

Education The News Article - March 9, 2021 0
NEW DELHI: A new education and skills development centre, set up in response to the impact of lockdown during peak COVID-19 months, aims...

Mars on Earth: Turkish Lake May Hold Clues to Ancient Life on the Red...

Tech The News Article - March 9, 2021 0
As NASA's rover Perseverance explores the surface of Mars, scientists hunting for signs of ancient life on the distant planet are using data...