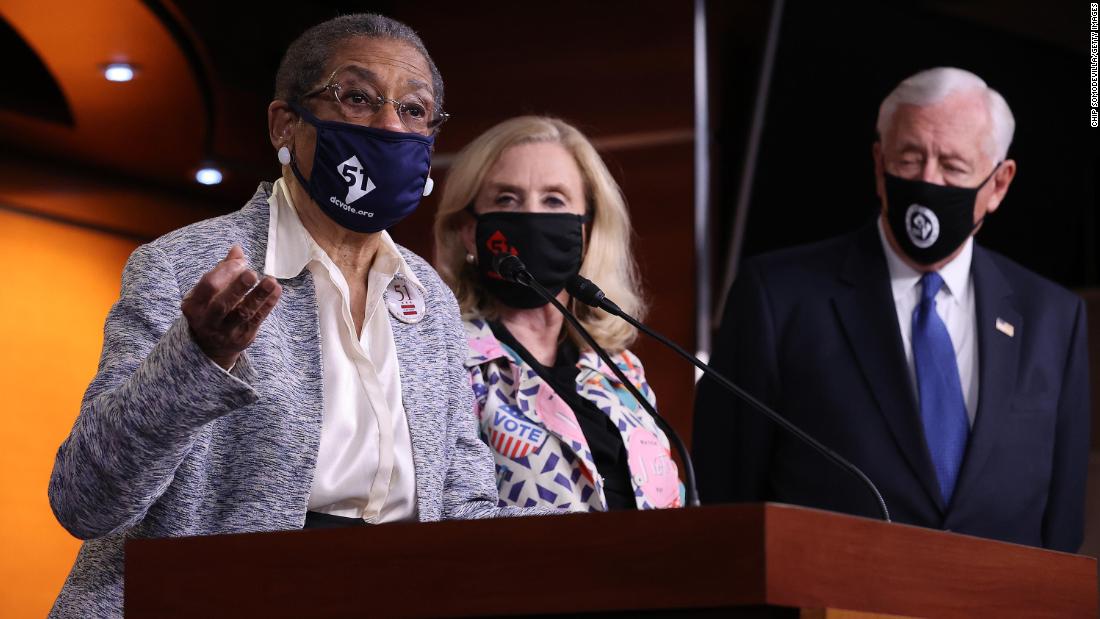 The legislation now faces an uphill fight in the Senate, where it is unlikely to get enough Republican support to clear a 60-vote threshold for passage.

It’s unclear whether even every Senate Democrat would support the measure. Democratic Sen. Joe Manchin of West Virginia indicated on Thursday that he is undecided on the DC statehood bill.

“I got so many things on my plate that I haven’t even gotten to that yet,” he told CNN when asked if he supports it.

Democrats have framed the issue of granting statehood to Washington, DC — which voted for Joe Biden over then-President Donald Trump by 92%-5% in November — as an important step for equal representation and voting rights in the United States, while Republicans have argued that the legislation represents a partisan effort by Democrats to push a progressive agenda and tip the scales in Congress in their favor.

“With HR 51, Congress is taking a significant step to enfranchise the people of DC and empower them to participate fully in our democracy,” House Speaker Nancy Pelosi said of the legislation on Wednesday. “Again, we’re excited that we will pass it. We will celebrate, and we hope that momentum will help it pass in the Senate so that the President can sign it into law,” the California Democrat said.

House Democrats also passed the bill — H.R. 51, the Washington, D.C. Admission Act — last year in a historic vote that marked the first time either chamber of Congress had advanced a DC statehood measure. But it did not advance in the Senate, which was controlled by a Republican majority at the time.

“Let’s be very clear what HR 51 is all about: It’s all about creating two new Democrat US Senate seats,” GOP Rep. James Comer of Kentucky said during a committee markup of the bill last week.

“This bill is part of the progressive pathway that President Biden, Leader Schumer and Speaker Pelosi have to reshape America into that socialist utopia that the Squad talk about,” he said, referring to the self-dubbed group of lawmakers that includes New York Democratic Rep. Alexandria Ocasio-Cortez.
Last month, a hearing on the legislation featured testimony from Democratic DC Mayor Muriel Bowser and other local officials.

Throughout the hearing, Democrats made clear that they see granting statehood to DC as a civil rights and representation issue, while Republicans claimed that making the nation’s capital the 51st state through legislation, rather than through a constitutional amendment, defies the nation’s laws, and pushed back on other logistical and political issues.

Bowser said in a statement on Thursday following House passage of the legislation: “This vote comes at a critical time when Americans nationwide are eager to deliver on the promise of liberty and justice for all. For centuries, an incremental approach to equality in America has delayed this promise for too many. Now is the time for bold action.”

This story and headline have been updated to reflect additional developments Thursday.

Arizona GOP election official defends office against Trump voting conspiracy theory: ‘We are humans, it has to stop.’

Biden ‘expressed his support for a ceasefire’ in call with Israeli Prime Minister, White House says

US court dismisses case against Cognizant, Facebook – Times of India

Business The News Article - May 18, 2021 0
BENGALURU: A US court dismissed a petition by content moderators at Cognizant that charged the company and...