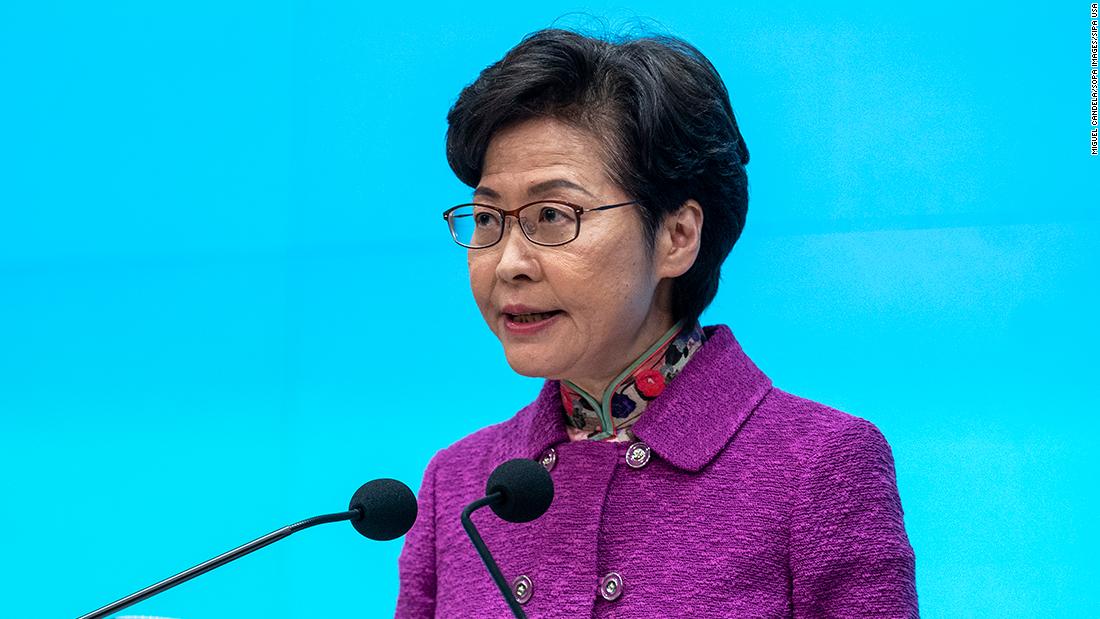 The restrictions also prevent Lam from holding any US-based assets.

“I’m using cash everyday for all the things,” Lam told Hong Kong International Business Channel on Friday. “I have piles of cash at home. The government is paying me cash for my salary because I don’t have a bank account.”

Lam’s revelation shows just how hamstrung she’s become by the restrictions. In August, she told Chinese state broadcaster CGTN that she hadn’t been to the United States in years and that the sanctions were “really meaningless.”
In another interview with the South China Morning Post published Sunday, Lam said that she only withdraws part of her salary and keeps it in a drawer in her house, with the rest of the money kept in the Hong Kong Treasury. Lam earns 5.2 million Hong Kong dollars ($672,200) a year, according to the government.

Lam’s comments have sparked a debate in China about how far-reaching the US government’s punishment is. The topic has attracted more than 2.5 million views and 500 discussions on Weibo, the Chinese social media platform.

“Can’t Chinese banks just help Lam?” wrote one Weibo user going by the handle “Mr Luo commenting on Law.”
In a staff report published Sunday, the Global Times, a state-run tabloid, wrote that Lam’s case is “a reminder that China’s national sovereignty and security is at stake with US dominance in global financial transactions.”

Lam’s problem may have a lot to do with how much sway the US dollar — the world’s reserve currency — has on the global financial system.

Chinese banks may be afraid of facing US sanctions themselves should they work with Lam, according to Terence Chong, associate professor of economics at the Chinese University of Hong Kong. That could cost them access to the dollar.

“They have a lot at stake,” Chong told CNN Business. “They just want to comply with the US rules.”

The sanctions did not explicitly spell out whether Washington would punish foreign financial institutions for working with Lam and others who were singled out by the US government.

But experts from the law firm Mayer Brown pointed out in an August report that the actions “will have implications for both US and non-US persons, including foreign financial institutions, who have dealings with these individuals.”

The Global Times also noted the importance of the US dollar to SWIFT, the messaging service that moves money around the global banking system. Banks rely on SWIFT for clearing US dollar transactions.

Citing a financial expert, the Global Times noted that the dollar’s dominance in such arenas “leaves China vulnerable to US sanctions.”

The question of how much the United States could use the greenback to pressure China is not a new one, either. Earlier this year, for example, Bloomberg reported that the Trump administration briefly entertained ways to undermine the Hong Kong dollar’s peg to the US dollar as tensions between Washington and Beijing escalated.

Analysts have noted that the United States could theoretically cut off Chinese banks from accessing the US financial system entirely. But any type of financial war could cause chaos, and ultimately hurt the United States. China is one of the biggest holders of US Treasuries.

Analysts don’t expect drastic changes to US-China economic relations when President-elect Joe Biden takes office in January. But they have pointed out that Biden’s tone will likely be a lot less fiery than President Donald Trump’s.

The 737 Max is no longer Boeing’s biggest problem, after yet another safety grounding

Insist or incentivize? Companies are deciding whether to make vaccines mandatory