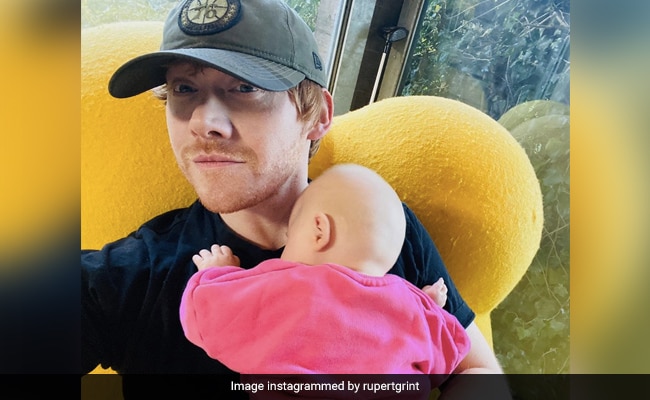 From ‘The Daily Prophet’ to ‘The Quibbler’ (Harry Potter fans would get the reference), the news that has everyone’s attention in the wizarding world today is that Rupert Grint, best-known for starring as Ron Weasley in all the eight films in the Harry Potter series, just made his Instagram debut and his fans can’t keep calm. The 32-year-old actor shared his first Instagram post on Tuesday night, where he introduced the world to his daughter Wednesday Grint. The Harry Potter star and his girlfriend Georgia Groome welcomed their first child in May, this year. Sharing the picture with his daughter, Rupert wrote: “Hey Instagram…Only 10 years late, but here I am. Grint on the Gram! Here to introduce you all to Wednesday G Grint. Stay safe, Rupert.”

Meanwhile, Rupert’s BFF Daniel Radcliffe aka Harry Potter shared Rupert’s picture on his profile and he wrote: “The happy father just joined Instagram. Welcome.” In the comments section of Rupert’s post, actor James Phelps, who played Fred Weasley, wrote: “Nougat.” In the films, they might not have been cordial but in real life, Tom Felton (who played Draco Malfoy in the Harry Potter series), gave a warm welcome to Rupert. He wrote: “Welcome Weasley , it’s about time. Love to Wednesday.”

The actor garnered more than 2 million Instagram followers in less than a day. The actor’s profile photo is a throwback with veteran actress Maggie Smith (Professor Minerva McGonagall) kissing his cheek. The photograph happens to be from the UK premiere ofHarry Potter And The Half-Blood Prince, which took place in July 2009.

Apart from the Harry Potter films, Rupert has also starred in Thunderpants, Cherrybomb and Wild Target. The Harry Potter series of films, distributed by Warner Bros, were based on JK Rowling’s famous novels. The film made stars of its principle characters Harry Potter (Daniel Radcliffe), Ron Weasley ( Rupert Grint), Hermione Granger (Emma Watson) and Professor Severus Snape (Alan Rickman), among many others. The final part of the series released on released in July 2011.

Alan Rickman’s diaries to be published as a book

Campus life by Zuni Chopra: Time and its deserted turrets

World News The News Article - March 3, 2021 0
Republicans are pushing hard at the state level to generally make it more difficult to vote, and say they want to make the...

Hawley defends opposition to every Biden Cabinet nominee: ‘I take them one at a...