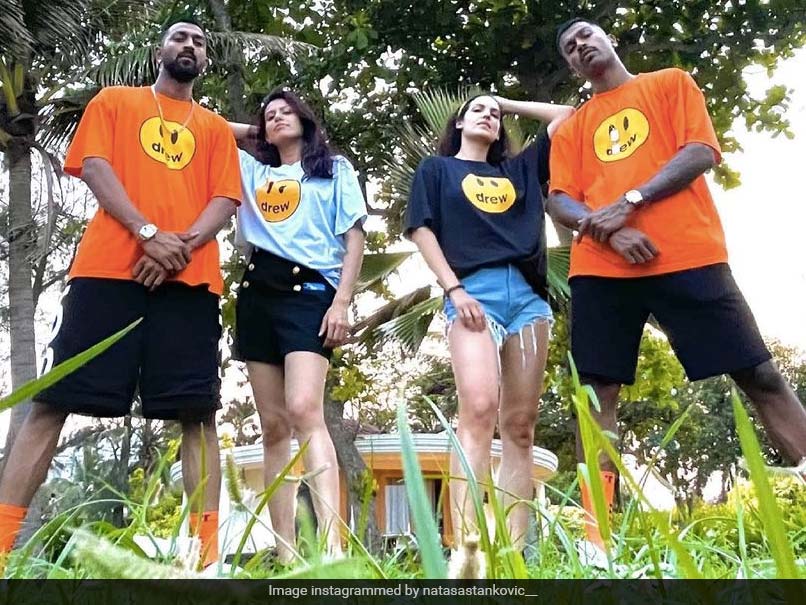 
Hardik Pandya took to social media to share a groovy dance video for his fans, where the Mumbai Indians (MI) all-rounder could be seen dancing with brother Krunal, Natasa Stankovic and Pankhuri Sharma. Hardik is engaged to Natasa since January 2020, meanwhile, Krunal is married to Pankhuri. The four of them are currently in Mumbai Indians’ (MI) bio-secure bubble, for the ongoing Indian Premier League (IPL) 2021 season. Natasa also shared a photo of the group on Instagram, and she captioned it as, “The Pandya’s swag”.

Here is the video and photo:

In the video, the Pandya brothers can be seen in identical outfits, with Natasa and Pankhuri dressed alike as well.

Both the couples are quote active on social media and they post videos and pictures on social media with each other on regular basis, which are pretty popular among fans.

Krunal and Hardik have featured in all of Mumbai’s games until now. MI are currently second in the league table, with two wins and a defeat.

The defending champions began their campaign on a poor note, losing to Royal Challengers Bangalore (RCB) in the season opener by two wickets. RCB are the only unbeaten team in the league right now.

The Rohit Sharma-led outfit bounced back in their next fixture, defeating Kolkata Knight Riders (KKR) by 10 runs. On Saturday, MI showed their class, beating SunRisers Hyderabad (SRH) by 13 runs in a low-scoring match.

MI have a chance to become the first team in IPL history to win three consecutive league titles on the trot.