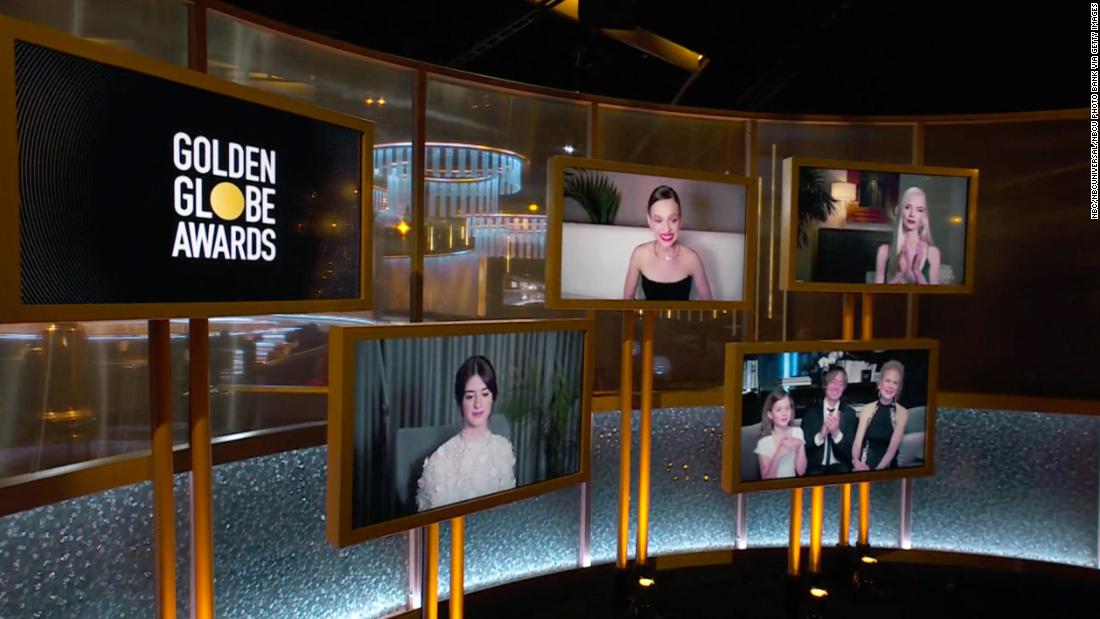 The Hollywood Foreign Press Association, the nonprofit organization behind the awards, recognized that reporting in the Los Angeles Times about its lack of Black members has created a serious public-relations issue. Yet the three representatives who appeared on stage Sunday offered only the broadest of pledges to do better in diversifying their ranks, and said nothing about separate ethical questions raised regarding the group and other reforms that are long overdue.

With a few exceptions, moreover, little was said about the matter by award recipients and presenters. If they were trying to be polite and not chastise the party’s hosts, that came at the expense of looking principled. Stars turned out and the show went on, sending a message that receiving awards trumps other considerations.

Still, failing to adequately address the elephant in the (mostly virtual) room was only one takeaway from Sunday’s poorly produced event, which felt especially true since the Globes have had five months to build on the pandemic template that the Emmy Awards more successfully established.

Those observations have implications for other award shows — mainly, the upcoming Oscars — none particularly reassuring in the prognosis for what comes next.

Delaying the awards calendar didn’t work, part I. In theory, pushing the Oscars and other award shows back by roughly two months offered a chance to buy time toward a greater sense of normalcy. We might be collectively closer to that, but we’re not there yet.

While the Emmys were an interesting novelty, the absence of in-person energy at something like the Globes — traditionally celebrated as the free-wheeling “party” in the way the Oscars aren’t — undercut the atmosphere. Beyond that, even with all the charitable pitches, some people who once might have enjoyed such frivolity, understandably, simply don’t feel that way right now.

Delaying the awards calendar didn’t work, part II. Another benefit of the expanded calendar was that there would be more movies from which to choose. But with many high-profile films held back hoping for theatrical releases, the pool of contenders is woefully light on titles with big commercial appeal. That includes not only best picture nominees, but for the Oscars, blockbuster movies that might have done well in technical categories.

The “what’s that?” response is getting worse. Streaming services might be convenient, but we don’t know how many people watch most of their offerings, and the abundance of them has further fragmented the audience, eliminating a rooting interest for many potential viewers.

How many people have actually seen “Nomadland,” Sunday’s best drama winner, or most of the other nominees? Because an awards show where people think “Nomad-what?” is really just a fashion show.
Is this a problem to fix, or the new normal? Oscar viewing has already declined more than 40% from where it was a decade ago. The Emmys fell to another record low. Networks and groups like the Academy of Motion Picture Arts and Sciences have treated dwindling viewership like a problem to be fixed, tinkering with hosts (or no hosts) and formats.

But there’s increasing reason to believe this is just the new normal — a world where the audience has splintered in a way that what were once mass-appeal events are considerably less massive. A pandemic-fueled drop could further erode those habits.

The choice, in that case, becomes should Hollywood continue to (perhaps fruitlessly) chase people who they’ve lost or who simply don’t care, or make these shows the best that they can be for those that do?

The Jane Fonda and Norman Lear tributes were highlights. There’s a lesson there. Celebrating the industry’s elders while they’re still here isn’t mere nostalgia. It can give these shows an emotional hook — at least among those old enough to remember — that they often lack, one that’s sorely needed given the limits of a virtual presentation.
The ratings problems go beyond just award shows. It’s not just award shows grappling with these issues. Even the Super Bowl looked less super this year. Ditto for the NBA Finals, the NHL playoffs and more.
As Jemele Hill noted in the Atlantic, there was an assumption that “the mere presence of sports would provide comfort, and perhaps a welcome distraction, for people who wanted to escape the horrors of the pandemic, at least momentarily.”

Instead, the opposite happened. “In practically every sport, the number of television viewers nosedived in 2020, despite the fact that more people than usual were stuck at home,” Hill wrote.

Award shows seem to be following the same script. That doesn’t mean it’s game over, but the game has changed, in a way that, for now, increasingly looks like a no-win proposition.

Earth Day programs come in many shades of green, but this year some seek rays of hope

Taylor Swift is back at No. 1 for the third time in less than a year

Lizzo has heard from Chris Evans about her drunken DMs

Trump wants you to boycott Coke. His properties are still serving it

Top Stories The News Article - April 19, 2021 0
But now that he's back at his company that does, among other things, hotels and hospitality, it is a little different for him...

SSC CHSL Exam postponed due to Covid-19 – Times of India