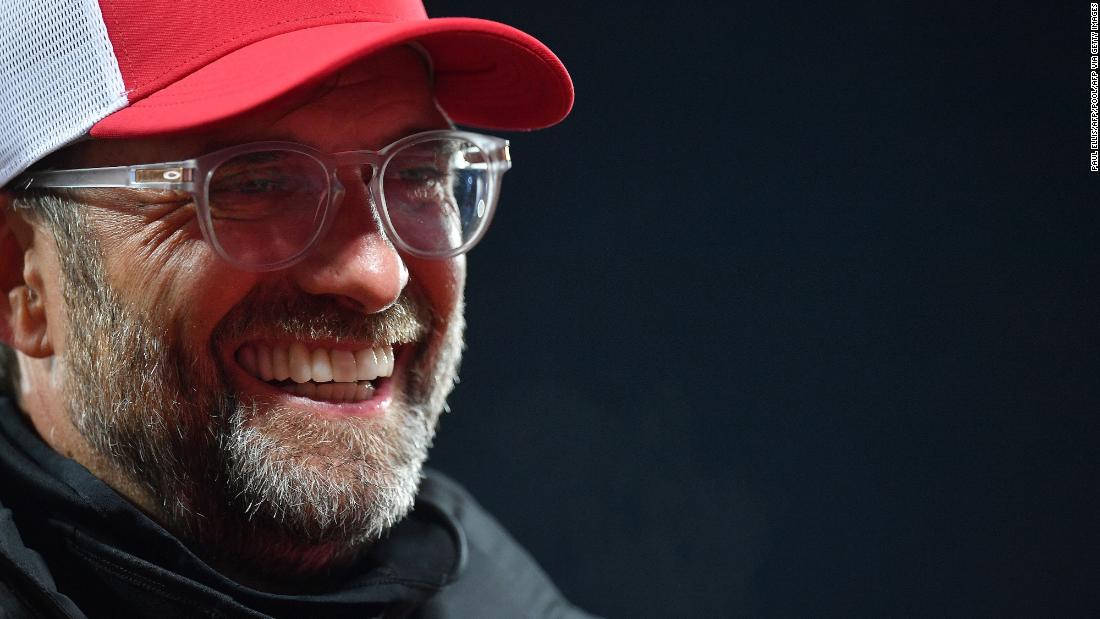 Having an affable and contagious personality is all well and good, but for Liverpool — a club that had been starved of domestic success for three decades — winning matters, too.

Last season, Klopp led Liverpool to its first top-flight English title since 1990 and his success on the red half of Merseyside, which also includes a Champions League title, has ensured his name will forever be embedded in the folklore of the city and the club.

“He’s got a special personality,” Carragher tells CNN’s Richard Quest, reflecting on Klopp’s impact at Liverpool since being appointed manager in 2015.

“[Klopp’s] got a way with words, going back to, as I said, the 60s with Shankly and there’s just something special. I think when we look back at his time he’s going to be on that pedestal with those other managers and it’s not just his ability to understand the game.

“It’s not just for Liverpool, he’s been loved at the other clubs he has been at before. That’s why Liverpool brought him here and he’s just got a connection now with the city and the people of it, where he almost feels like a German Scouser, shall we say?

“That’s his moniker right now in the city,” added Carragher. “He’s thought of like that and I think it will be a sad day when he leaves.”

Carragher says it would be impossible to bottle up exactly what it is that makes Klopp so successful.

“It would cost a few quid, let’s put it that way,” he laughs.

A city ‘born for football’

Liverpool is a city steeped in football history. It’s two teams, Liverpool and Everton, enjoy one of the oldest rivalries in English football, with their stadiums less then a mile apart, separated only by Stanley Park.

Despite both enjoying plenty of success in the 60s, each winning multiple domestic titles, Liverpool went on to become a dominant force in the decades that followed, though Everton also enjoyed a purple patch in the 1980s.

Carragher — himself an Everton fan growing up, before defecting to the red side of the city when he joined Liverpool’s academy in 1988 — believes the two clubs are the beating heart of the city.

“It almost feels like the city was born for football in some ways,” he says. “I think it is the biggest thing that the city is probably known for around the world alongside the Beatles, but I think the football clubs keep the city going.

“In terms of interest, in terms of finance coming into the city, you know, you’ve got Liverpool and you’ve also got Everton as well.”

According to a report on the 2017-18 season by Deloitte, Liverpool alone generated $583 million of economic value for the city.

“Certainly on European nights, people come from all over to see Liverpool on a European night, the filling hotels and restaurants, taxis to and from the ground,” said Carragher. “So it’s a huge thing for the economic situation in Liverpool.

“It’s not in an affluent area, it’s not down south, it’s not the biggest of cities, but what comes out of this city is pretty special and that just comes from the people, that’s all there is, and the passion for football.”

Carragher retired from football in 2013 after making more than 700 appearances for Liverpool. While he enjoyed cup success, most notably winning the Champions League in 2005, the one title that eluded him was the Premier League.

Some of those 17 years he spent in Liverpool’s first team were particularly turbulent, finishing as low as eighth in 2012, and by Carragher’s own admission the teams he played in were “never good enough” to win the league.

“That was no big secret,” he says.

Certainly, some of the players that came through the door at Anfield in those 30 years between titles were well below the high standards the club had set for itself and its fans in the previous decades.

That all changed when Klopp arrived in 2015, with the team rising from eighth after his first season in charge to become English champions in the space of five years.

“Listen, I wish I was playing [and] I was involved in this team, no doubt,” Carragher says.

“I think when you stand back as a supporter, you just think of the team, the club and with it being so successful, doing so well at this moment, it’s just been a brilliant ride for everyone to enjoy in … let’s say one half of the city, because the other half is a probably not too happy with that situation.”

The culmination of Klopp’s five years in charge came as Liverpool finally lifted the Premier League trophy at the end of last season, though it was certainly not as anyone would have dreamed it over the past 30 years.

The coronavirus pandemic forced last season’s campaign to be temporarily suspended, before the remaining matches were concluded in empty stadiums up and down the country.

Despite the somewhat bittersweet moment of triumph, Carragher says title-winning celebrations were only dampened ever so slightly.

“It was special … I mean, obviously the situation with a Covid-19 was difficult because the supporters couldn’t be in the stadium to really embrace it, enjoy it,” he says.

“But certainly there was a lot of enjoyment, a lot of alcohol consumed, because there had been such a long wait, but I think the feeling is one title is not enough for this team.

“This is a really special team Liverpool have now, a special, iconic manager in Jurgen Klopp and I think we all believe there’s more to come.”

Back-to-back victories in the Premier League over Chelsea and Arsenal, two teams on the rise and expected to be challenging for a top four place come the end of the season, have laid down an early marker to show the reigning champion is fully prepared to retain its crown.

Though riding their luck at times in Monday’s 3-1 win against Arsenal, after Alexandre Lacazette squandered a glorious late chance to equalize, Liverpool was utterly dominant for the vast majority of the game and reemphasized just how much better than the chasing pack it still is.

Along with Leicester City, Liverpool and Everton are the only sides with a perfect record after three games so far this season.

Liverpool finished last season 17 points clear of nearest rival Manchester City and, despite a number of teams strengthening heavily in the transfer market, Carragher believes Klopp’s side is still “the best team in the league.”

“I don’t see that changing this season … and long may this reign of Jurgen Klopp and his team continue,” said Carragher, who was speaking to CNN before Liverpool’s win over Arsenal.

The next step for this team, Carragher says, is to win the league title and Champions League in the same season.

Only one team in Premier League history has achieved the feat, Liverpool’s bitter rival Manchester United during the historic treble-winning season in 1999.

However, Carragher is confident Klopp’s side is good enough to do just that.

“It takes a special team,” he says. “It doesn’t happen very often, but Liverpool were very close. When they won the Champions League, they only lost the league by a point. That was a couple of years ago, so that team has proven it can do it before and I wouldn’t be surprised if it’ll do it again.

“There are three or four teams — the best teams in Europe and Liverpool are one of them — and sometimes you need to flip a coin and whether it falls your way or not, but Liverpool can certainly win the Premier League and no doubt the Champions League in the same season.”

Soccer: US women’s team ‘past the protesting phase’ of anthem debate

World News The News Article - March 7, 2021 0
Within the US, every state has had at least one tornado, and some have dozens each year. The US is special in terms...