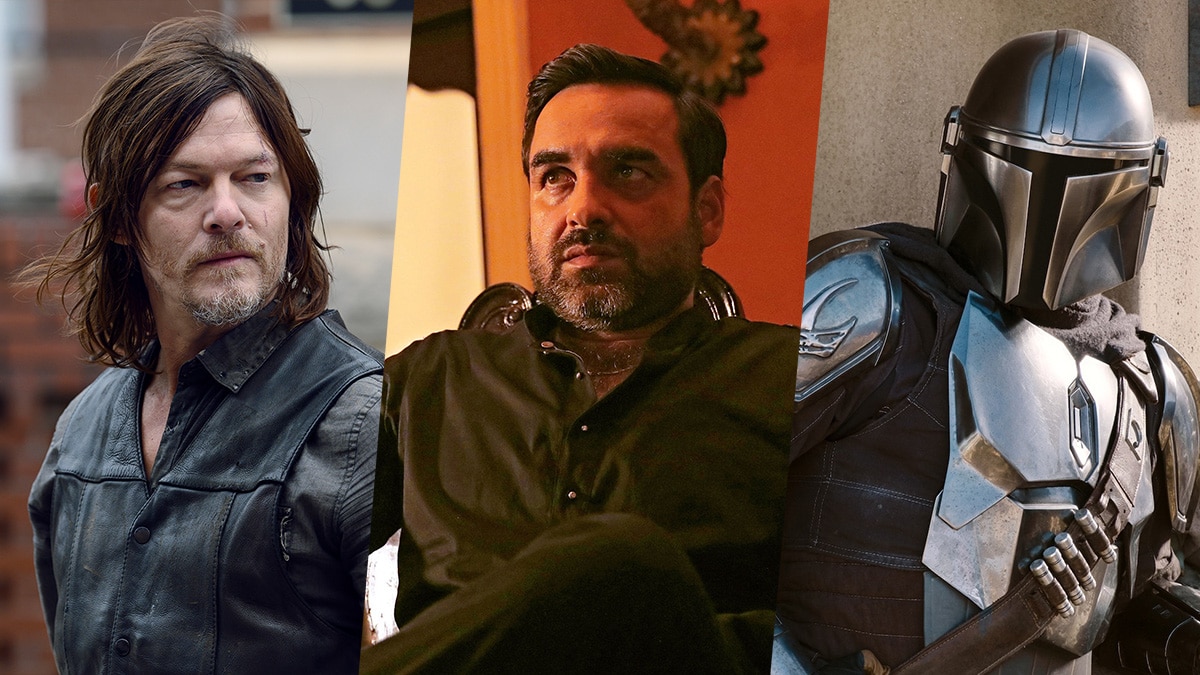 A lot is happening in October. We’ve the return of gun-toting Mirzapur, Baby Yoda in The Mandalorian, zombie horror The Walking Dead, and futuristic sci-fi Star Trek: Discovery to look forward to. Elsewhere, we’ve movies and miniseries involving the likes of Nawazuddin Siddiqui, Nicole Kidman, Adam Sandler, Bill Murray, and Ethan Hawke. That’s not all. There’s a new short film set in the Frozen universe. A new TV show about the early days of NASA’s space programme. Another about an AI gone rogue. And that’s also an Aaron Sorkin ensemble venture that has gotten good reviews.

Add to that a few holdovers from September including anti-superhero satire The Boys season 2, Jude Law and Naomie Harris in HBO’s The Third Day, a Mossad agent in Iran in Tehran, and more of Family Guy season 19. With that, here’s our September 2020 guide to Netflix, Amazon Prime Video, Disney+ Hotstar, Apple TV+, Voot Select, and SonyLIV.

When: October 2
Where: Netflix

When: October 5
Where: Voot Select

When: October 5
Where: Disney+ Hotstar

Originally slated for April, fans of the long-running zombie horror series have had to wait for a while to see how The Walking Dead seasons 10 ends, owing to post-production delays caused by the pandemic. Well, it’s not the end anymore, as AMC has added six more episodes to season 10, airing until early 2021. Season 11 won’t be available until late 2021, again thanks to the pandemic.

When: October 7
Where: Netflix

A dedicated volunteer (Adam Sandler) spends every Halloween looking after the citizens of his hometown Salem, Massachusetts USA. Nothing ever happens and the crying-wolf Hubie has become the joke of the town. But when a criminal escapes and people start disappearing, it’s up to Hubie to convince everyone that the threat is real. Kevin James, Maya Rudolph, Ray Liotta, and Julie Bowen also star.

When: October 7
Where: Disney+ Hotstar

When: October 9
Where: Netflix

A free-spirited headstrong woman (Yami Gautam) has no patience for her matchmaking mother (Ayesha Raza) and is determined to find a guy herself. But a prospective match (Vikrant Massey) who loves to spout cheesy romantic lines has made it his mission to win her over. If only he knew what he’s getting into. Former assistant director Puneet Khanna makes his directorial debut on this film, working off a script by Navjot Gulati (Jai Mummy Di).

The Haunting of Bly Manor

When: October 9
Where: Netflix

After the success of The Haunting of Hill House, Netflix has decided to turn it into an anthology series à la American Horror Story. That means Bly Manor has no connection to Hill House, even though it shares much of the same team. Victoria Pedretti, Henry Thomas, Oliver Jackson-Cohen. Kate Siegel, and Catherine Parker return as new characters, while Mike Flanagan stays as creator. All episodes on release date.

When: October 9
Where: Disney+ Hotstar

Tom Wolfe’s 1979 book about the first astronauts selected for NASA’s fledgling space programme has previously been made into an Oscar-winning film, but National Geographic is taking another go at it anyway in a series format, which will go right up to the moon landing in future seasons. For now, it will look at the early days of the “Mercury Seven”, played by Patrick J. Adams, Jake McDorman, Patrick Fischler, Colin O’Donoghue, James Lafferty, Aaron Staton, and Michael Trotter. Two episodes on release date, and the rest weekly.

When: October 9
Where: SonyLIV

National Award-winning director Hansal Mehta is behind this based-on-a-true-story tale of stockbroker Harshad Mehta (no relation) who’s behind one of the biggest stock market scams in India. Based on Debashis Basu & Sucheta Dalal’s 1993 book, “The Scam”, it tracks Mehta’s rise and downfall during the ‘80s and ‘90s in then-Bombay. Pratik Gandhi, Shreya Dhanwanthary, Sharib Hashmi, and Ananth Mahadevan star. The Abhishek Bachchan-led film The Big Bull, slated for 2020 on Disney+ Hotstar, is also about the same man.

When: October 16
Where: Netflix

The Discovery crew find themselves in the 32nd century devoid of the Federation in the third season of the Star Trek series, where they must rely even more on each other and live by the values of the Federation if they are to survive in this new reality they have been thrust into. David Ajala (Supergirl) joins the main cast, and there are recurring roles for Blu del Barrio, Ian Alexander (The OA), and Adil Hussain (Mukti Bhawan). New episodes weekly.

The Trial of the Chicago 7

When: October 16
Where: Netflix

When: October 21
Where: Netflix

A young second wife (Lily James, from Cinderella) finds herself battling the shadow of the titular first wife after arriving at a grand English family estate owned by her new husband (Armie Hammer, from The Social Network) in this period adaptation of Daphne du Maurier’s 1938 novel. It’s been previously made in 1940 by Alfred Hitchcock — and won the Oscar for best picture. A high bar to clear for director Ben Wheatley (Kill List).

When: October 23
Where: Amazon Prime Video

Lost in Translation’s Sofia Coppola and Bill Murray are reunited in this comedy-drama film that follows an impulsive playboy father (Murray) and her married-with-a-baby daughter (Rashida Jones) who begins to suspect that her husband (Marlon Wayans) is having an affair. As father-daughter team up to investigate, they bond, and clash over their different approach to relationships.

Once Upon a Snowman

When: October 23
Where: Disney+ Hotstar

The Frozen franchise further expands with a third short film — after 2015’s Frozen Fever and 2017’s Olaf’s Frozen Adventure — that will chronicle the first steps of the innocent, insightful, summer-loving snowman, as he discovers his purpose in in the snowy mountains outside Arendelle. Yes, it’s an Olaf origin story. Trent Correy (Frozen II) and Dan Abraham (Space Jam) co-direct.

When: October 23
Where: Netflix

When: October 23
Where: Netflix

Anya Taylor-Joy (The Witch) plays a chess prodigy and an orphan who must struggle in a world dominated by men to rise on the world stage. Oscar-nominated writer Scott Frank (Logan) is the co-creator, writer, and director on this miniseries adaptation of Walter Tevis’ 1983 eponymous novel. Bill Camp, Thomas Brodie-Sangster, Marielle Heller, Harry Melling, and Rebecca Root co-star. All episodes on release date.

When: October 26
Where: Disney+ Hotstar

Big Little Lies’ Nicole Kidman and David E. Kelley reunite on this psychological thriller miniseries based on Jean Hanff Korelitz’s 2014 novel “You Should Have Known”, about a therapist and first-time author whose life unravels with a violent death, a missing husband, and a very public disaster. Hugh Grant, Édgar Ramírez, Noah Jupe, Lily Rabe, and Donald Sutherland co-star. Susanne Bier (The Night Manager) is the director. New episodes weekly.

When: October 30
Where: Disney+ Hotstar

And yes, it will be available in glorious 4K Dolby Vision HDR.

Watch the Trailer for The Mandalorian Season 2

For All Mankind Season 2 Review: Lunar Cold War Heats Up

From The Family Man to Pitta Kathalu, What to Stream in February

World Entertainment The News Article - February 26, 2021 0
"Coming to America 2": In the sequel to the 1988 hit, Eddie Murphy's Prince Akeem returns to America to search for his long-lost...