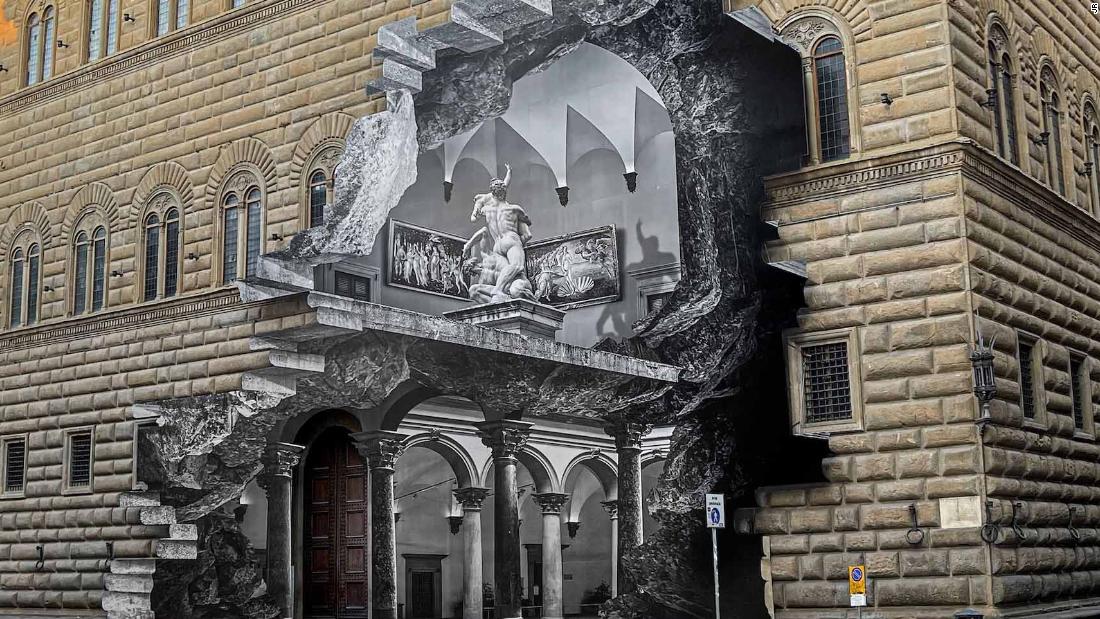 Street artist JR, known for the larger-than-life photographic installations that took over Rio de Janerio during the 2016 Olympics, has now unveiled a towering optical illusion in Florence, Italy.

The major installation revealed today is located at the Palazzo Strozzi, a historic cultural arts center in the heart of Florence.

The 91-foot spectacle, titled “La Ferita,” or “The Wound,” scales the Palazzo’s Renaissance façade and simulates a giant gaping hole in the front of the building. Inside the architectural tear is an imagined vision of the Palazzo’s interior, made real by a black and white photographic collage.

JR began his career at age 13 as a graffiti artist in France. His work, which has been exhibited on staircases, train carriages and even atop the Louvre, is a fusion of street art and photography. In his 2015 book “Can art change the world?” JR writes, “Images are not special. It is what you do with them.” JR’s readiness to place context above content has brought him international acclaim.

His latest installation explores how access to art and culture has been jeopardized by the coronavirus pandemic.

“Walking through Florence feels strange these days — without the visitors that make up such a normal part of the life of Florence, it feels quiet and less vibrant,” JR said in a statement to CNN Style. “Without being able to enter a museum, to attend a concert or spend time at an exhibition, we realise that it is culture that gives life its colour and that the beauty of our city is activated by the people that pass through it, soak up the history and culture of Florence, and leave enriched by it.”

The illusory gash across Palazzo Strozzi symbolizes the wound all cultural sites have sustained due to ongoing pandemic restrictions. The art industry has been devastated by the ongoing shutdown of museums, galleries, libraries, theaters and cinemas — with even the most revered institutions struggling to get back on their feet. Last May, the historic Shakespeare’s Globe theater in London revealed it faced insolvency and permanent closure as a result of lockdown measures.

The installation references the painted depiction of 16th century illusions, which allowed artists to portray a non-existent depth into the thickness of brick by applying their perspective studies to sheer walling.
Credit: Courtesy JR

The installation also launches the Palazzo Strozzi’s new Future Art Programme, which hopes to support the creation and promotion of contemporary art in Italy with an annual public art commission to be revealed in Florence every spring.

In a press statement, Palazzo Strozzi Director Dr. Arturo Galansino said the center has a “unique” determination to “forge a dialogue between the classic and the contemporary through the involvement of artists capable of interpreting the present.”

“So it is apt that we launch the Programme with JR’s new work ‘La Ferita,'” he added, “(which is) a powerful reflection on the difficult conditions surrounding access to culture in the age of Covid-19, but also a symbol of freedom, creative imagination and participation and an opportunity to involve the audience, the public at large, in a totally new way.”

‘Nomadland’: Chloé Zhao and crew reveal how they made one of the year’s best films

Suspect arrested in theft of Van Gogh and Hals paintings