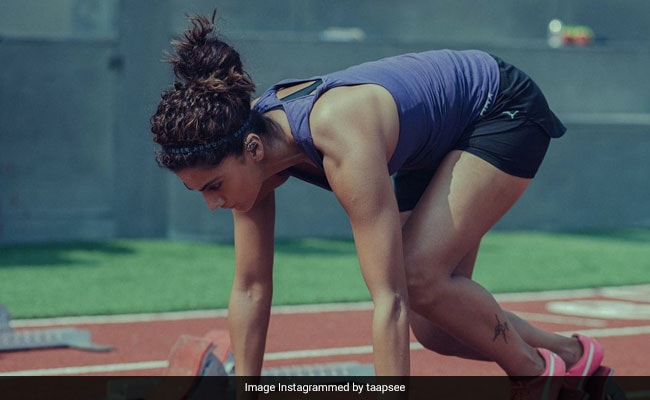 Taapsee Pannu is all set for her forthcoming film Rashmi Rocket, which is “going to be one of many firsts” for her. The actress, who has been sharing snippets from her preparation diaries, shared another updated about the film. Taapsee Pannu will play the role of a sprinter named Rashmi, who hails from a village in Gujarat’s Kutch, in the film. She has been sharing pictures of herself prepping for her role in gyms and on racing tracks for a few days now. In her latest post, Taapsee looks ready for race on the track. “Get set…#RashmiRocket. This one is going to be one of many firsts!” she wrote in her post. Taapsee’s photo received a whole lot of appreciation from Samantha Ruth Pabhu, Tisca Chopra and Jaccky Bhagnani.

In her previous posts, Taapsee Pannu shared glimpses of how she has been gearing up for the film. Take a look at them:

Before starting the shooting schedule of Rashmi Rocket, Taapsee was vacationing with her sisters in the Maldives, where she was on a “shredding diet.” She captioned one of her holiday pictures: “While I take a break, my super-efficient Munmun Ganeriwal (her nutritionist) continues to hold the fort for me. As she shifts me into a shredding diet for #RashmiRocket. She gets me to indulge in this yummy, holiday breakfast of eggs, avocados, and mushrooms rich in proteins and good fats.”

Meanwhile, check out the poster of Rashmi Rocket here:

Directed by Akarsh Khurana and co-produced by Ronnie Screwvala, Neha Anand and Pranjal Khandhdiya, Rashmi Rocket will release next year.

EXCLUSIVE! Taapsee Pannu: I don’t have skeletons in my cupboard. My honesty gives me the confidence to be fearless – Times of India ►

I-T raids on Taapsee Pannu, Anurag Kashyap: FM Nirmala Sitharaman says they were raided in 2013 as well – Times of India