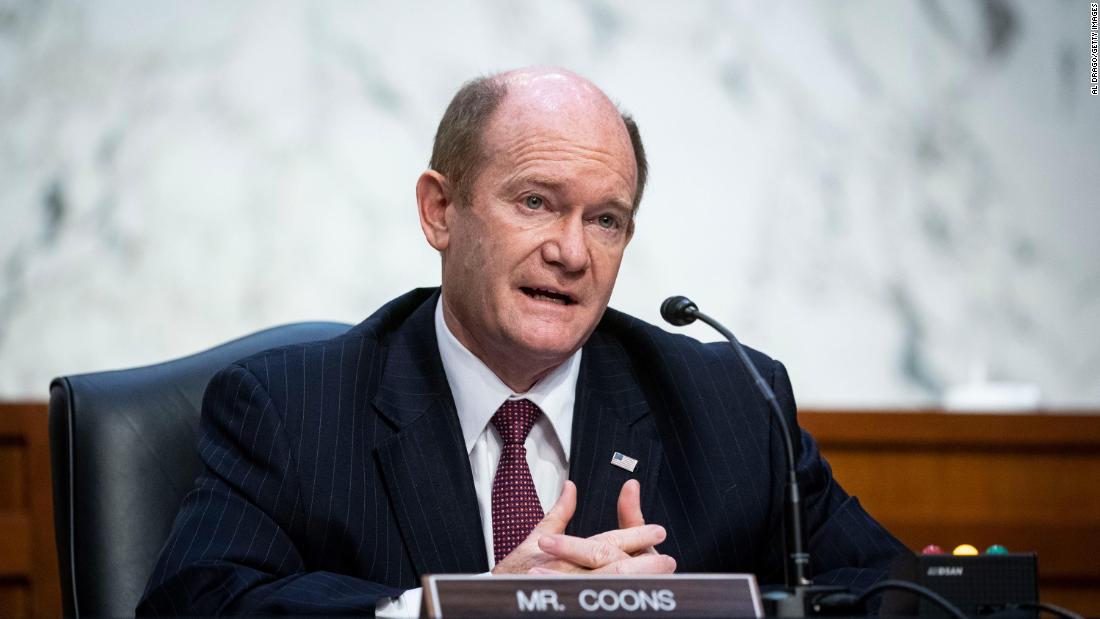 “I think it’s important that we have a balanced January 6th commission,” Coons, who represents Delaware, told CNN’s John Berman on “New Day.”

Earlier this month, Pelosi announced that plans for the creation of a “9/11-type commission” to “investigate and report on the facts and causes” relating to the January 6 “domestic terrorist attack.” Democrats and Republicans have been at odds over the partisan makeup of the commission, but also over the scope of the probe and how the panel would examine domestic extremism.
Under Pelosi’s draft proposal, House and Senate party leaders would appoint two members each to the commission, with President Joe Biden selecting the panel’s chair and two members — making the breakdown seven Democratic appointees to four GOP appointees. Commission members would not be elected leaders and would be outside the government.

Pelosi later on Thursday said that the makeup of the commission could be “easily negotiated” and argued that the scope of what it covers is more important.

“It’s about domestic terrorism. We want to solve this. And now I will do anything to have it be bipartisan so, as your point is, that it will be well received by the American people,” Pelosi told reporters on Capitol Hill during her weekly press conference.

On CNN, Coons stressed that commission members should be “folks who are not politically motivated in how they get to the bottom of this,” and not currently serving or seeking public office.

Coons said the commission should investigate “all the events that led up to the riot at the Capitol and this baseless theory that (former President Donald) Trump won the election.”

“This is important. It’s one of the key ways of how we come together as a country,” he said. “Joe Biden ran on unifying our nation and to unify our nation, we have to lay bare the ways in which we just haven’t believed each other. Joe Biden was legitimately elected president of the United States, and we need to help the American people accept that fact.”

Coons and others have pointed to the commission established after the September 11, 2001, terrorist attacks, led by former Republican Gov. Tom Kean and former Democratic Rep. Lee Hamilton. Chaired by Kean, the commission had five Republican and five Democratic members.

“The leaders of the 9/11 commission have said part of why it was so successful was that it was even, it was balanced, and it was led by folks who were well-respected and well-regarded, who had a reputation for working across the aisle,” Coons said.

Tech The News Article - May 13, 2021 0
Samsung Galaxy F02s and Galaxy M02s are reportedly receiving their Android 11-based One UI 3.1 Core updates in India. There is no information...

Pune Police thanks Jacqueline Fernandez for contributing for their well being: Your kind gesture...

Entertainment The News Article - May 13, 2021 0
Pune Police recently took to their official Twitter handle to share a note of thanks for Jacqueline Fernandez for generously contributing towards their...